RUSH: Conrad Black has a really, really good piece today in American Greatness. Where did I put this? Maybe I haven’t yanked it out of the printer yet. He goes through everything that’s happened here. He calls it one of the greatest constitutional crises in American history, claims that Richard Nixon never got close to what these people have done. But his close is — and this is where I always… People of a certain generation always think that this kind of behavior is ultimately going to have a price and that it will be paid. 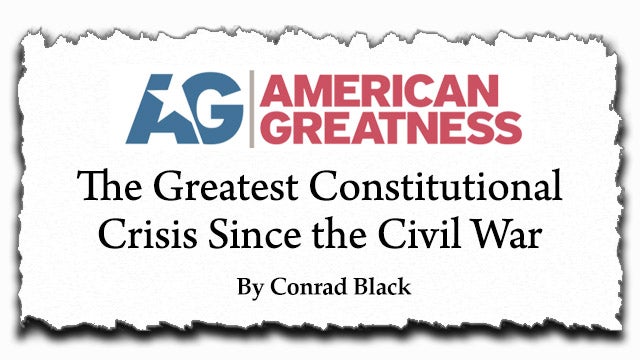 And Conrad makes the point that the Democrat Party, when all of this is over and the Mueller report has got nothing, and the Democrats don’t give it up and they continue to pursue it — which they’re doing… Adam Schiff is now saying, “Well, just because Mueller may not find anything doesn’t mean we’re stopping. We’re going to look at Trump’s money. We’re gonna look at Trump’s business.”

Conrad Black believes all of this will blow up on these people in 2020 like nobody can see right now, that the Democrats are going to lose in a major way that nobody can see right now because the American people are just not going to tolerate this once they find out what has happened. Well, true, but will they find out what has happened? Does that not remain the question of the day?