What It Took for Politico to Discover Twitter Bots

CALLER: Hey, Rush. It’s a pleasure to get on here and get our voice out. I’m one of the supposed 200 Twitter accounts, which is perpetrating some kind of false information on Twitter, particularly regarding the hashtag voter fraud, voter ID. I’m one of the ones that were targeted in that Politico hit piece this weekend. I’m a real person. We’re real people. We just love the president and want to fight for our country.

RUSH: All right. Let me tell people what this is all about. I had this story last week and I didn’t get to it, and I intended to. It just kept sliding back in The Stack as news continued to break. Politico had what they thought last week was earth-shattering, unbelievably discovered news. Know what it was? Politico found out that there are bots on Twitter and that they were flooding Twitter with critical comments of the Democrat presidential field for 2020, and Politico was outraged. Politico just thought this was the sneakiest thing they had ever heard of. How dare anybody use Twitter in this way.

And I’m looking at this story, and I’m literally having conniptions, because this has been a practice on Twitter for at least 50 — well, 10 years. I’ve told you about the Stop Rush movement. We identified it. You know, I say something controversial here and all of a sudden there’s this massive sponsor boycott underway. Well, rather than sit there and deal with it, we wanted to find out where this was coming from because we’re talking to advertisers and they are being flooded with emails from people claiming they’re never gonna patronize the business ever again, and they’re scared to death.

So we found out the Stop Rush movement — I’m gonna spare you six months of investigation time — we found out that this movement was 10 people. Many of them were retired university professors. They span the country. They’re from Camarillo, California, all the way to Boston. They were working with Twitter. And the upshot of it was is that they were able to make themselves appear to be hundreds of thousands of people by creating bots that would then generate what was in effect a form email that was sent to any business plugged into the algorithm by these people.

And we looked at it, we studied it, and we found out who the 10 people were and what their animus toward me was. And we then took the evidence to advertisers. And I remember telling people, “Why would you do that, wuh wuh?” Well, because, we’re trying to educate them that what they’re hearing isn’t true. There aren’t hundreds of thousands of people offended. There aren’t millions of people outraged. There’s 10! And they’re making it up and they’re creating it. It’s all phony!

It’s the same stuff that got O’Reilly. It’s the same stuff that they’re trying on Tucker Carlson right now. So when I saw The Politico story like they’ve just figured this out? They’ve never heard of this? And they ran this big story claiming this kind of operation, how dare anybody do this, how dare anybody scam the Democrat 2020 presidential candidates. I’m looking at the story like, “Where have you people been?” We’ve announced this. We made a big deal out of it. They weren’t interested, I guess. They don’t care. They don’t even know.

But let one of these attacks on Twitter be focused against Democrats, and particularly the 2020 presidential field, and then Politico gets all outraged over how Twitter is being used. And, you know, a lot of this stuff traces back to Media Matters for America, this left-wing corrupt site that tries to create problems for every media outlet on the right.

I don’t doubt there’s some bot activity in this. This is one of the popular ways Twitter has been used. And Twitter helps this stuff along, by the way, for those of you that don’t know. We alerted Twitter to what was going on. “Well, we have no say over this. We have no control. We wouldn’t have any way to stop something like this. Can you, by the way, prove it?”

Yeah, we can give you the names and addresses of these 10 people. We found them. We know who they are. We know where they are. We know how they spend their day. And even with that info, you know, it took a little while to educate the recipients of all of this, to tell them you just gotta learn to ignore this. It isn’t real. You’re not getting emails from real people. 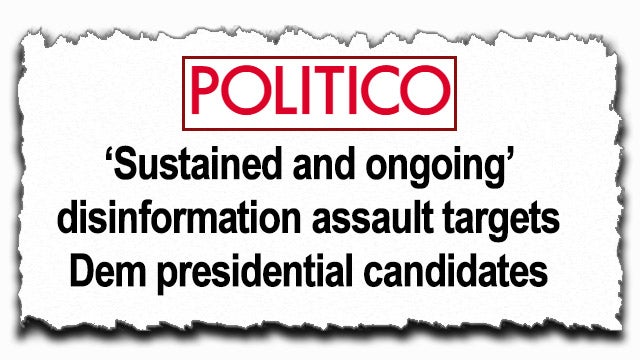 I said, “Look. Most of them come from out of state. They’re not your customers anyway.” It was mostly local advertisers they were targeting. Our national advertisers are immune to this, for a host of reasons. I just found it fascinating that something that’s been going on for 10 years Politico just discovered and thinks it’s horrible when the targets are Democrat. And now our caller is assuring us that it’s not bots. It’s real people opposing the Democrat nominees supporting the president. Thanks for the call.