Bill Maher Reveals What Liberals Really Think of Us

RUSH: I had something in The Stack yesterday I didn’t get to. Bill Maher had a monologue on his Friday night program on HBO, and I thought it was fascinating. He said the red state, blue state divide is really nothing more than the red state being jealous of that. He said we don’t hate the left. We want to be the left. They have Chef Wolfgang Puck. We have Chef Boyardee. 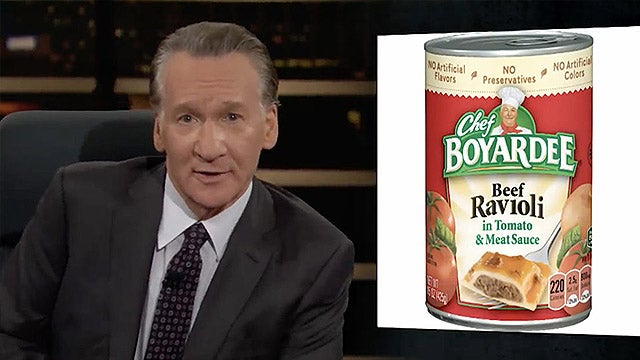 And he went on to insult life in flyover states, states that vote Republican. And portrayed blue states where leftists hang out as the creme de la creme and the elites of the elite and said the real problem in America is not that we on the right think the left is destroying things, that they’re the cool kids, they’re the hipsters and that we really want to be invited to their party, but we know we never will be because we’re nerds or we’re kooks or we’re hicks or we’re freaks, and we know it.

He had some funny lines in it, but you know what it did? It unveiled a lot of the thinking about people who are among the elite who think they are in the elite. And it revealed a lot about the way that they think. And at the top of the list, they really do consider themselves elitists. It’s unusual for this to be admitted to because most elites try to tamp that down. They try to blur that line. They don’t like being called elites because that’s a minority of people. Therefore, it’s not a majority of thought, not a majority of behavior, it’s not a majority of belief and that’s because they’re elites.

And I don’t know that the jokes and the making fun of red-state voters and conservatives and Republicans was all there, but the end result was that the guy ended up confirming the idea that there are a whole lot of people out there who, just because they’re liberal, think they are much better than all the rest of us and much smarter than all the rest of us and that they do talk down to us and that we’re not offended by it, we’re jealous. We want in. We want to be in that big clique. It’s almost like high school never ended. They remain the cool kids, and we’re not.

In the process this was all admitted to, that this view of the country and the vast majority of its people are a bunch of hayseeds. Now, you say, “Well, Rush, that’s not news. We already know.” Yeah, but what’s news is they’re finally actually admitting it now. Remember, for all comedy to be funny, there has to be an element of truth in it. 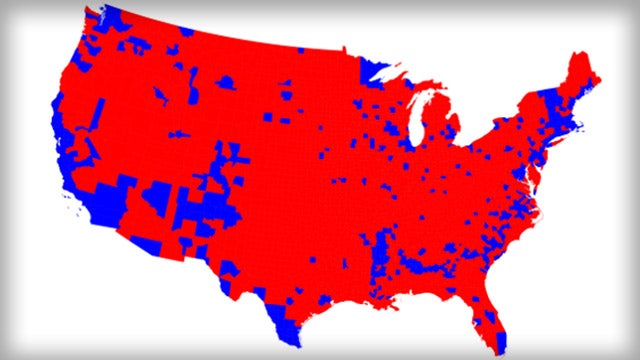 I’ve got these Bill Maher sound bites. I want you to listen as he describes the divisions in America and how he rips red state or Republican voting America. This is from his comedy monologue on Friday night on HBO. Two sound bites. Number 1 here.

MAHER: We have a problem in America called “Spatial geographic inequality,” which means that the most affluent and educated people are clustered in just a few cities. The blue parts of America are having a big prosperity party, while that big sea of red feels like their invitation got lost in the mail. And they still use the mail.

MAHER: They turn on the TV and all the shows take place in a few hip cities. There’s no Real Housewives of Toledo or —

MAHER: There are no red carpets in Wyoming, and no one ever asks you, “Who are you wearing?” because the answer is always “Target.”

RUSH: So, you see how this — whether you think it’s funny, these are good lines or not, we actually have somebody admitting to the way flyover Americans, red state Americans and Republican conservative voters are seen, how they’re seen. Maher, have you ever traveled San Francisco, seen the piles of human excrement that you have to avoid or all of the homelessness and the needles?

And how about where you live in Los Angeles? Have you ever tried to buy a home as a starter out, just some newly graduated college student just entering the workforce? For crying out loud, the cities are where the action is? It’s where all the hipsters are? And here is his explanation of the two Americas.

MAHER: There are two Americas, and it seems like one is where all the cool jobs are, where people drive Teslas and eat artisanal ice cream. We have orchestras and theater districts and world-class shopping. We have Chef Wolfgang Puck; they have Chef Boyardee.

MAHER: The flyover states have become the passed-over states. That’s why red state voters are so pissed off. They don’t hate us. They want to be us! They want to go to the party.

RUSH: So there’s the divide. And, you know, the elites don’t like to be known as elites. Amongst themselves they do, but they always deny. Like the Washington establishment denies there’s elitism there. “No, no, no, no. We’re men and women of the people. We’re in politics,” and so forth.

Why are so many people leaving these cities, Mr. Maher? Why are so many people leaving these great states and great cities? And we wish they weren’t, because they’re taking all of the things that corrupted where they live, forcing them to leave, and they’re bringing all that politics to where we live! We don’t want what you do where we live! Quite the contrary.

We don’t like high taxes, and we don’t like all of the other gigantic government control. We don’t like any of the aspects of the way you people run government. We don’t want your culture corrupting and polluting, and yet you have all these people leaving California and leaving New York. And where are they going, Mr. Maher? They’re coming to where we are where there aren’t any income taxes. Where the property taxes are much lower.

And you know what’s gonna happen? They’re gonna end up voting for a bunch of people just like them that are gonna raise their taxes all over again. And then they’re gonna have to find someplace else to move to when they ruin their new location. 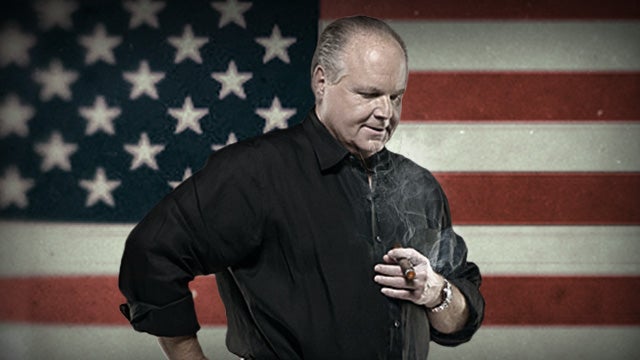 RUSH: This is Walt in Daphne, Alabama. Welcome, sir. Great to have you with us.

CALLER: Good to talk with you, Rush. Good afternoon. Bill Maher misidentifies the two Americas, and through his kind of arrogant comments, he helped us to identify them. He identified those places where there’s probably the greatest income inequality, the greatest number of people needing government help and accepting government’s help. It’s in those blue places he showed on the map where there were two Americas. Not the red and blue, but within the blue places. He was arrogant. He was smirky.

RUSH: Aw, come on, now! Come on, Walt. Everybody knows you wish you lived next-door to Bill Maher and were —

RUSH: — going to Spago so you could be served by Wolfgang Puck.

CALLER: Well, I don’t eat Chef Boyardee, but we eat pretty good down here in the Baldwin, Mobile County area. There’s some delicious seafood and some real good cooks.

RUSH: Well, you’ve got some great barbecue as well.

RUSH: Here’s the thing about this. I think the group of people that Maher is talking about is a very, very tiny number. I mean, how many people in Los Angeles, do you think, go to Wolfgang Puck restaurants? They’re great, don’t misunderstand. But do you think most people in Los Angeles…? He’s not talking about a large number of people. When he talks about (impression), “We’ve got Wolfgang Puck and we’ve got fine shopping and we’ve got artisanal ice cream,” he’s talking Hollywood, folks. That’s the group that he thinks he is a member in good standing of — a very, very small number of elites.

You’re absolutely right. California, you ought to read some of the things Victor Davis Hanson has written about the state. He’s a farmer. He farms almonds in California, and it is the biggest example of have and have not. You’ve got the coastal elites — San Francisco, Silicon Valley, Los Angeles (you might throw San Diego in there too) — and the rest of this state is as agricultural as any other red flyover state in America is: Farm after farm after farm after farm. Bill Maher wouldn’t be comfortable in Fresno. 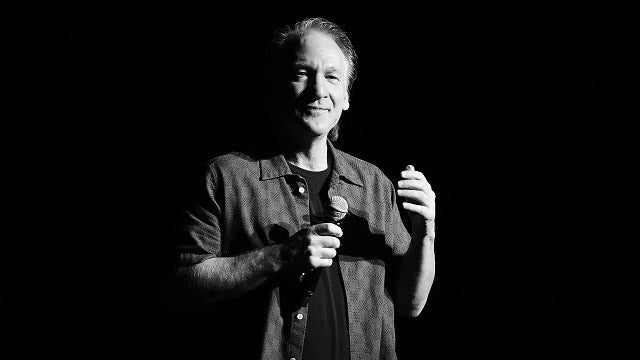 He wouldn’t know what to do in Bakersfield. Bill Maher in Sacramento would be embarrassed to be there. And yet all these places are smack-dab right in the Central Valley, the San Joaquin Valley of California, and he has no desire to be anywhere near it. He’s talking about a very, very small physical space and an even smaller group of people, which includes the same group in New York (which is basically the Manhattanites that also have a place out in the Hamptons), and, of course, the Washington elite. And it’s really a tiny, tiny, tiny number of people.

But you are so right about the divisions between haves and have-nots in these states. New York City. Look at the dropout rate in the public school system. It’s 50% among Hispanics, the dropout rate the New York public schools. Look at the number of people who cannot afford to live anywhere in Manhattan or New York City. It’s the same thing in Southern California and in San Francisco, the number of people who live in these places but can’t afford to work there or can’t afford to live anywhere near where they work.

Again, there are all these people exiting these states, which is at a rate that is picking up dramatically. You know, Maher is just trying to be typically insulting of most people while he revels in being a member in good standing in a really, really tiny — relatively tiny — group of people, and it would be in the entertainment/media/tech sector. And it’s a small clique, but they think they run everything, and they think that they are cooler and hipper and more advanced. They have no desire to relate to anybody else.

They don’t know how to. So all they can do is look down and condescend, and it’s a way of making them feel even more secure about their acceptance into this elite group, which is really what it’s all about. It’s conformity for acceptance. They don’t think any differently. They all sound alike when they open their mouths. They have the same identical beliefs, none of it born of critical or original thinking. But that’s what it takes to be accepted, and that’s the big life achievement, that’s the great accomplishment: To be accepted in this really tiny group of elites.