Trump’s on Track for Reelection

RUSH: Richard Cohen in the Washington Post today. Now, he’s one of their columnists. He has been around there for many, many moons. And he’s got a piece that’s headlined: “Democrats Are Wrapping a Gift for Trump.” He’s talking about reelection in 2020. He says, “I don’t quite know what a handbasket is, but the Democratic Party is heading in one to electoral hell with its talk of socialism and reparations. Given a Republican incumbent who has never exceeded 50% in Gallup’s approval ratings poll and who won the presidency thanks to a dysfunctional Electoral College…”

What? A “dysfunctional Electoral College”? There’s nothing dysfunctional about it. It operated exactly as designed. The Democrat Party “is nevertheless determined to give Donald Trump a fair shot at re-election by sabotaging itself. In fact, it’s veering so far to the left it could lose an election in 1950s Bulgaria.” He writes, “The problem for the Democrats at the moment is that much attention is being focused on political novelties such as Rep. Alexandria Ocasio-Cortez who espouse both socialism and reparations.

“She is ferociously telegenic, infectiously likable and clearly inexhaustible. She is also political poison, the product of a freak election in a New York City district where the past has taken root — socialism and a lot of rot about the evils of capitalism. She cheered Amazon’s decision to [split] New York for friendlier climes, taking at least 25,000 jobs with it. For a mere first termer, this is quite an accomplishment. It usually takes much more seniority to do this much damage,” and he goes on to highlight some of the idiocy coming out of people like Kamala Harris and all these other people.

He’s very much concerned that these people are essentially turning 2020 over to Donald Trump right now. I think he’s got a point, and they’re not gonna be able to help themselves. Even if they read this piece and believed it, they’re not gonna be able to help themselves. There’s too many that want the nomination, and there’s too many of these lamebrains who believe that in order to get it, you have to be a socialist or communist, that that’s what their base wants.

So it’s gonna be a race to see who can become the most radical with the most credibility the soonest. So we found at least one adult in this cabal of Democrats: A columnist at the Washington Post. But don’t worry. They’re not gonna believe him. They’re not gonna think he knows what he’s talking about. They can’t afford to.

RUSH: Jeff in Phoenix, you’re next up, sir. Great to have you. Glad you waited. Hi. 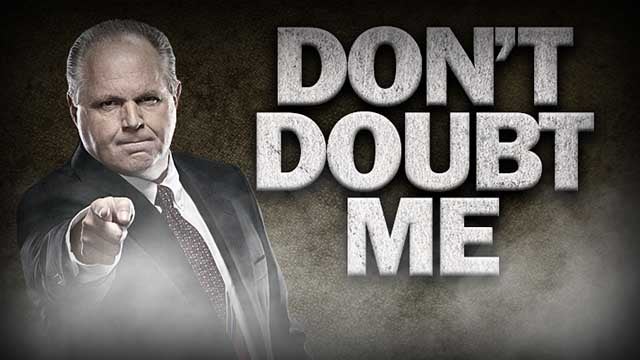 CALLER: Thanks for taking my call, Rush, and thanks for what you do. I want your thoughts on whether you think Trump can win in 2020 as a reaction against the extreme leftism, kind of similar to how — partly how — Reagan won over Carter in the same way.

RUSH: Yes, I do. I think Trump can win reelection. It’s hard to predict, though. There’s two years for things to happen. We don’t even know if he’s gonna run for sure. But if he does, I think he’ll win. Incumbents have a built-in advantage going in. Trump has a success track record that can be demonstrated on unemployment, job creation, economic growth. I mean, things that really matter to people are going great guns.

They were convinced the country hated Reagan, that they had convinced the country that Reagan was a dunce, that he was a great risk with his finger on the nuclear button — and Reagan wins in a 49-state landslide. These people on the left lie to themselves, and they believe the lies their own media reports. And I’m telling you, Trump’s popularity is much higher than any public opinion poll is indicating today. Do not doubt me on that.