RUSH: So I found here a great analogy, a great way of explaining where I think the Democrats are right now. Conrad Black has a piece that ran today at American Greatness, and I’m gonna endeavor here to read the last couple of paragraphs. But this is essentially what I have been attempting to piece together today: Where the Democrats are, how what they’re doing is affecting them and how it is being seen by a pretty big majority of the American people.

In ’72 with George McGovern is where they went as far left as the Democrat youth of today are trying to take the Democrat Party again, and it was a Richard Nixon 48- or 49-state landslide win. So the Democrats today are beginning to look more like the Republican destined losers of ’64 and the Democrat destined losers of ’72, “as the reality sinks in that Trump has demolished the post-Reagan bipartisan Tweedledee-Tweedledum politics of sloth, a depressing ‘new normal’ and foreign policy impetuosity (Iraq War) or defeatism” of not being able to defeat Iran, North Korea, Syria.

In other words, what he’s suggesting is that after the Reagan years, post-Reagan — the bipartisan Tweedledee-Tweedledum — we were just treading water. We didn’t really have a national identity. The deep state was running things, and putting America first was nowhere near anybody’s lexicon. The idea that America should be supreme in the world had vanished. This is one of the great things about vanquishing Reagan. Reagan was a Trumpist in the sense of making America great; America is the solution so the world’s problems.

Once Reagan was gone, then the deep state could once again come in and begin their globalist push, diminishing the role of United States in the world except as a financier, but not an ideological leader. This, I think, is a pretty accurate portrayal of America in the nineties under Bill Clinton and going into the 2000s where we had the 9/11 attacks that took us into the Middle East and war and so forth, and it was just (sigh) Tweedledum, Tweedledee.

We were treading water with no real national identity, because there weren’t a bunch of leaders around who actually thought in terms of a national identity. Everybody was focused globally. In the aftermath of that (Tweedledee, Tweedledum), the Democrats are like a suicide case contemplating Russian roulette with all the chambers loaded, and they’re the ones loading in the cartridges!

“In the aftermath of this shock, the Democrats are like a suicide case contemplating Russian roulette with all chambers loaded, and they are the ones loading in the cartridges.” The suicidal issues for them are “open borders, a top personal income tax rate of around 70%, nationalized health care; legalized infanticide; a green policy that bans cars, airplanes, oil, coal, and bovine flatulence; and now, reparations for African-Americans…”

So you put all those things together and you’ve got a suicide gun with all those issues being loaded — cartridges in the chamber that the Democrats have put in the chamber — and now they’re aiming all of that at themselves. Conrad says, “Unless a sensible person,” and he names some people here. I disagree with him on this. I’m just gonna share what he says. 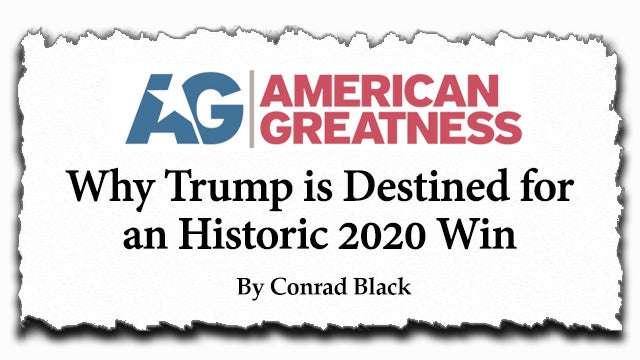 “Unless a sensible person like Michael Bloomberg or even Joe Biden — or possibly Amy Klobuchar or Sherrod Brown — gets hold of that party, the Democrats will self-inflict mortal wounds and give Trump the greatest plurality in history, (breaking Richard Nixon’s record of 18 million in 1972).” (chuckles) Now, Amy Klobuchar I don’t think is a salvation for the Democrat Party. She’s part of this cabal!

Here she is talking about “we’ve only got 12 years left” as she’s announcing her candidacy in a blizzard? It’s almost like Algore scheduled the event. Sherrod Brown from Ohio? I think Conrad’s playing reverse psychology on these people, actually suggesting that maybe they think about nominating one of these three because neither of…? Maybe I shouldn’t say this too loudly, but, I mean, these people don’t have a lickspittle prayer.

He gives a little more historical perspective here. “In 1944, Roosevelt focused on the spurious claim of a Republican congressional candidate that the president had sent a destroyer back to retrieve his dog in the Aleutian Islands, while returning from his Pearl Harbor meeting with General MacArthur and Admiral Nimitz. FDR’s Republican opponent, Thomas E. Dewey, found himself running against the president’s dog. In 1940, Roosevelt just had to recite the names of three reactionary congressmen:

“‘Martin, Barton, and Fish,’ and the absurdity of the refrain helped to win him a third term.” The reason for this history: “Trump is no Roosevelt (either one), but the Democrats seem to be yielding to the ineluctable urge that possesses each party every other generation, to utter a primal scream of nonsense, get everything off their chest and out of their system, be dragged to the padded cell by the voters, and regroup back at center-field four years later. It may even be good for them — as therapy, not as government.”

That’s his take, Conrad Black in Canada. That’s his take of the current the current status of the Democrat Party — and to the extent that he’s saying this, I agree. They are in the process of committing political suicide. They’re loading the cartridges. They’re aiming the gun at themselves. The thing is, they don’t know this. They haven’t yet discovered it.

RUSH: Back to the phones, McHenry, Illinois. This is Bill. I’m glad you waited, sir. Hello. Hi.

CALLER: How soon will Senator Schumer be forced to apologize for giving the president credit for backing out of the negotiations without giving any concessions? The other question, your Conrad Black article, the narrative you read through, how soon will we know that the Democrats have concluded he’s right, that ’64 and ’72 are gonna dictate who they nominate?

RUSH: Nominating who would confirm for you that Conrad Black is right?

CALLER: Nominating an individual who’s a sacrificial lamb, someone who they’re willing to put up with the idea that that individual has no political future whatsoever —

They knew they were gonna lose ’84. I was at the Democrat convention in San Francisco, and a friend of the family’s, a Democrat from Sikeston, Missouri, came up to me, “I’ll tell you what, Rush, you spot me 75 electoral votes and we can win this.” I said, “What do you mean spot you 75 electoral votes?” “I’m just telling you, Rush, that’s how close we are.” Spot you 75 electoral votes. They knew that Mondull was gonna take him down. They knew there was nothing they could do. This one, they think they’re gonna smoke. This election is gonna be what 2016 should have been because they’re gonna make sure Trump doesn’t steal, collude with Russia this time.

No, no. The contest in the Democrat Party to see who can be publicly insane the most consistently and the most courageously loudly is gonna determine who wins their nomination. Biden’s not gonna get the nomination. If they put Plugs in there, then the caller may be right. If these guys nominate Plugs, a 77-year-old? There’s no way! Why do you think I told Chris Wallace I think he’s a front-runner? I want ’em to do it. Come on. Plugs is the nominee? Ha-ha-ha-ha-ha-ha.

Here, grab sound bite number 16 very quickly. Doug Schoen is on Fox, he’s a Democrat. The Democrats don’t pay any attention to Doug Schoen anymore. So don’t worry this. He’s on Fox, and he’s warning the Democrats that Cortez is gonna sink them in the states that they need to win.

SCHOEN: For the Democratic primary she is a figure of, you know, great appeal. For the general election, she is the type that could hurt in the Midwest swing states, the states, Pennsylvania, Michigan, Wisconsin, that Trump won over Hillary, she could single-handedly torpedo the party in those states if Trump runs the kind of campaign I’m expecting that he will, Stuart.

RUSH: And do you think that she’s gonna realize that? Do you think Cortez is running around saying, “I gotta be very careful ’cause I could torpedo the party in these states.” She’s not gonna think that way. No way! She’s gonna think somebody like Biden would torpedo the party. She’s gonna think that somebody – (interruption) no, no, no. No. Do you really think Biden’s gonna get the nomination? (interruption) That’s my point. He’s the only adult. They’re not looking for adults. That’s the whole point! Their problem is with adults.

RUSH: Ah, the Holman Jenkins piece: “The Media Will Re-Elect Trump.” You know, like Doug Schoen, there are a lot of Never Trumpers — not a lot; there are few — that are beginning to recognize what’s going on on the left with this race to the extremes. They’re very much worried that all of this is gonna end up electing Donald Trump. I do believe that, and I don’t see anything stopping this. I don’t see the Democrat Party stopping and taking stock and realizing they’re headed off the rails.

I think it’s just the exact opposite.

I think they’re off the rails, and that’s what feels natural and normal to ’em; so it’s gonna continue. We’ll see.