RUSH: Out of the blue today I’m reading my tech blogs, and there are a couple of items going up for auction somewhere that date back to the 1970s, the very first AT&T picturephone. Now, you may say, well, what’s the big deal about that? It’s because I was in Pittsburgh when this happened in 1972, and I constructed a full weeklong bit about having one of these installed in my studio. And I had a guy come in, pretend to be the AT&T installer. And it went on for a week.

It was one of the most fun things I did, and I’d totally forgotten about it. So I’m thinking maybe I can relive this — not do the bit, just tell you about it. Because it was hilarious, some of the things that we set up. Because we knew the audience would not believe that I had — for example, here’s what I did. I announced that I had formed a partnership, back then it was Ma Bell. I had formed a partnership with Ma Bell to be first the test the new picturephone and that we were gonna spend the weekend — this was a Friday — we were gonna spend the weekend installing and then Monday we would try to start using the thing, all in cooperation with Ma Bell.

So the program ended at 10 o’clock in the morning. I went across the street. There was a Gimbels department store. Do you remember this story? You remember Gimbels? Gimbels doesn’t exist anymore, but it was like a Macy’s. I went to the lingerie department, and I just made mental notes of the layout of everything and the woman, the staff working there and what she was wearing and as much as I could remember. I made myself look like just a customer. I didn’t buy anything, but I ran around and — I went back across the street to the radio station to the production room and I turned on the tape recorder and I called her.

I called Gimbels and I asked for the lingerie department, and I told her who I was. She knew who I was, and that I was participating in the first live test of the new AT&T picturephone. And what I wanted to do was buy a couple of bras and slips. But I don’t have time to come over there, could you hold a couple from the rack and scan them with your phone and I could see whether or not I liked ’em. “You can’t do that.”

“Yes, yes, the phone company is very forward-thinking. The carbon granules in the microphone portion of your phone are a low-resolution camera. They’ve been there for a long time. If you just hold that phone up to those slips, I’ll be able to tell you whether I like ’em or not.” We had somebody over there watching this. 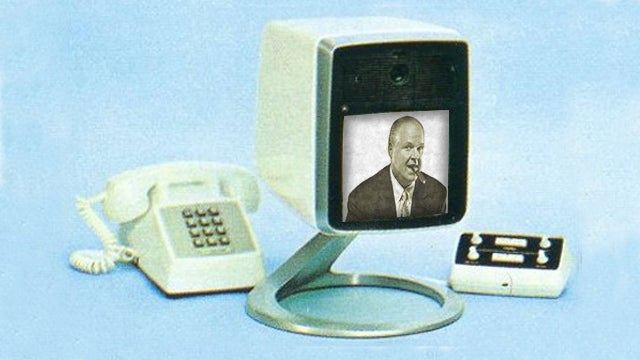 She said, “I feel like a fool doing this.”

I said, “Well, lean down behind the counter where you are right now.”

“Yes, ma’am, I can see you. You’re very blurry right now because the microphone’s very close to your mouth, but if you’ll hold that phone away from you and scan up and down I’ll tell you what you were wearing.” Of course, I was able to do ’cause I’d just been over there and seen it. Well, this went on for a week, and it was hilarious. And I see in this story that a couple of these things are actually up for auction today, and it just reminded me of that.

And with the CPAC speech ten years ago, there’s a — I don’t know — an air of nostalgia in the air.