RUSH: Grab audio sound bite number 2 and 3. Thomas Sowell was interviewed by David Asman, who is at Fox News. He was filling in for Neil Cavuto, was guest hosting Cavuto’s show Coast to Coast on the Fox Business Network. He asked him, “”You yourself as a student were drawn towards socialist ideas. You wrote a book on Marx. What turned you against” the Marxists theory? 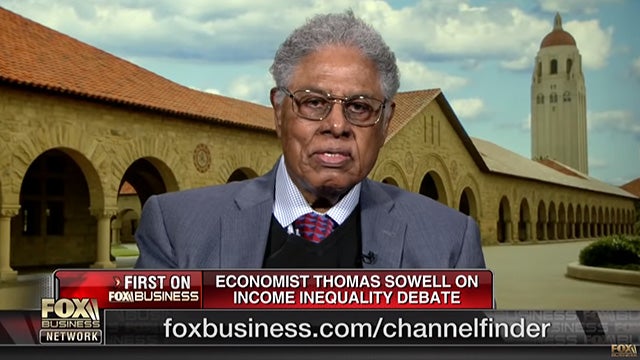 SOWELL: Facts. Before I was a Marxist, I was an empiricist, and I stayed an empiricist. And with the passing years, I simply — as I looked into more and more things, I — saw the difference between reality and the rhetoric. Unfortunately, so many people today, including in the leading universities, don’t pay much attention to evidence. When you see people starving in Venezuela and fleeing into neighboring countries and realize that this is a country that once had the world’s largest oil reserves (chuckles), you realize that they’ve ruined a very good prospect with ideas that sounded good but didn’t turn out well.

RUSH: Now, the next bite is the money bite. Asman says, “If I have to ask this question, because you’re so honest and you see things so straight on. Do you think we’re destined to go through a period of socialism where these ideas — which have never worked anywhere and will not work here — will still be tried? And if so, could this bring down our country?”

SOWELL: I do have a great fear that in the long run we may not make it, and I hate to say that. And the one thing that keeps me from being despairing is, of course, we don’t know. There’s so many things we can’t possibly know, and so we may make it. But I wouldn’t — I wouldn’t bet on it.

RUSH: Now, when I saw these sound bites, it reminded me. I’ve interviewed Dr. Sowell numerous times for The Limbaugh Letter. He’s a genuine national treasure. He is one of the few remaining scholars at the Hoover Institute that has not become Never Trump. Victor Davis Hanson is the other. But, man, practically everybody out there has become a Never Trumper. These two guys are isolated. By the way, Victor Davis Hanson’s book is now out. March 5th, yesterday, was the pub date, and it’s The Case for Trump.

I recommend books here all the time, but this one is so good. Victor Davis Hanson and The Case for Trump. He calls out the Never Trumpers by name. He just destroys them and makes mincemeat of them, and he explains to anybody who might care why Trump is Trump and why Trump is popular and how Trump won and why it is crucial that Trump continue winning. You know, Victor Davis Hanson and Sowell are not that far apart. They both think Trump is the last gasp at stanching this stampede toward socialism.

Now, Dr. Sowell, he startled me. I very seldom am startled by what people say, but I was interviewing him once for The Limbaugh Letter. It was back when Obama was president, and I asked him, “What is your greatest fear as we are talking here today?” And he said, “My greatest fear is that the Iranians are going to set off a nuclear bomb somewhere and that Barack Obama would surrender.” I remember I was caught sort by the notion that he thought Obama would surrender, not that the Iranians would use a nuke.

I mean, that’s not so far outside the bounds, but that an American president would surrender?

“Oh. I have no doubt Obama would surrender if that happened. If they take out Chicago, you know damn well Obama’s gonna surrender. That’s all it would take — if they got an American city — and he’d give up. He’d cry uncle,” and he was serious. He was dead serious. So when he fears that we’re not gonna be able to resist socialism, and he says this on the basis that it seems to be forever popular amongst the youth. It just no amount-of-evidence convinces these people that it can’t be done. I have been trying to figure out why this is, just to satisfy my own curiosity.

Because in my life I have never once been tempted by it. Whenever I trace back my first intellectual awareness of such things, I have never been tempted by the notion of socialism. It’s always repulsed me. Communism, socialism, all of these things. Now, a lot of it is the way we are raised. But I got to thinking: What are people’s experiences with this that make them think that it is doable? Are there experiences people have at some stage of their lives that they think is socialism and it makes them feel happy or joyful or content?

I said, “Is there such a circumstance in people’s lives?” Somebody said to me, “Well, have you ever thought about the structure of the nuclear family?” I said, “What do you mean?” “Well, you got mom, dad, 2.8 kids. You know the drill.” “Okay. So what about it?” The person said, “Well, isn’t the nuclear family, by definition, socialism? You’ve got the adults, the providers. You’ve got the kids, which are the objects here, and they’re cared for, they are provided for, they are protected, they are shielded.

He said, “I don’t care. It’s still the first awareness people have of being taken care of, of being provided for, with no responsibility. Oh, you might have the chores do, but you do not have to earn anything, don’t have to earn a living. You don’t have to do anything. Just get up! Especially in the modern era where the parents tell you how special you are, and your self-esteem is the number one objective and you’re never allowed to lose and you get a participation trophy for just showing up, and you don’t get any taste of what life is really like.”

So I stopped and considered it for a moment. “Well, I guess it’s possible.” But I think there has to be more than that, and it has to be in education, combined with the rebellious nature of young people to not accept what their parents believe in and so forth. So it’s very complicated. But I’ll tell you the one thing that has to be present for this dream of socialism to live, and that’s full-fledged ignorance. Without ignorance, socialism doesn’t have a life. 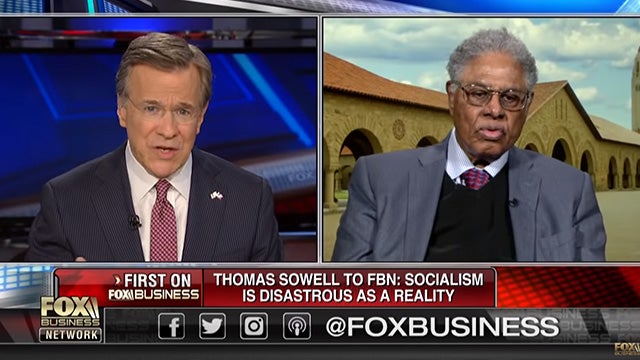 Without people not being informed about what it really is — without people being lied to about how wonderful it is, how fair it is, how equitable, how equal, how sustainable, whatever the keywords are. You cannot have people believing in socialism who are not abjectly ignorant, and that’s what Dr. Sowell is saying here, rhetoric versus… He says he’s an “empiricist,” meaning empirical data, the facts. Well, if you don’t have the facts — if you’re never taught the facts, if you are never taught the empirical data of truth — then you’re left to wallow in the rhetoric.

And the rhetoric can paint these vivid word pictures that create all of these wonderful illusions. And then you find these people who end up believing this stuff, and they become the biggest hypocrites on the face of the earth. You know the biggest hypocrite in the world is Algore. The biggest hypocrite in the world. Here’s a guy who has arguably made his fortune promulgating a hoax and never subjecting himself to the rigors of a lifestyle that he would impose on everybody else. He travels around on private jets everywhere. He has a gigantic house, uses all kinds of fossil fuel to power his house and his other properties, his multiple properties, his multiple jets and so forth.

There are people like that all over the left.

They are exempt because of their good intentions, and they’ve mastered this game exceedingly well.