Theory: Mueller Report Will Focus on Obstruction to Set Up Impeachment

(interruption) Well, it won’t be… What do you mean, “There’s nothing in it to report”? That’s precisely why it’s gonna be the only thing in the news! There will be leaks. There will be analysis. There will be predictions. There will be all kinds of people who have inside information. Speaking of which, Andy McCarthy has a piece out at TheHill.com predicting… He’s one of the people that thinks the report’s gonna drop this week, and Andy says that the Mueller report is gonna have nothing to do with collusion because there isn’t any collusion, that the Mueller report is gonna focus almost entirely on obstruction of justice. 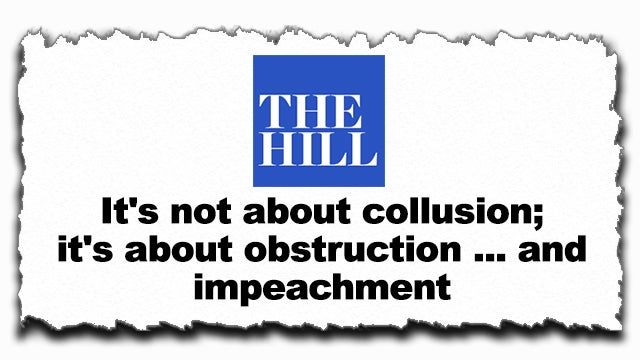 If it does that, then it is a pre-impeachment report. If it focuses on obstruction — and, course, there isn’t any Russian collusion that Mueller has found; there wasn’t any Russian collusion except by Hillary Clinton and the Democrats and the people that she hired. So, if they focus on obstruction, like firing Comey or calling the Mueller investigation a witch hunt… If that’s this kind of thing that this report consists of — and I’m sure it’s gonna be detailed to make the case Mueller wants it to make.

One of the reasons that this rings true to me is, go back to old Jerry Nadler, Jerry Nadler of the House whatever committee he chaired (judiciary, I guess) and his request for documents from 81 people in the Trump administration about what? Do you recall? What did Nadler say is the focus of his investigation? Obstruction. So we’re putting two and together. If Nadler is focusing his investigation on obstruction, does Nadler have a heads-up on what Mueller’s report is going to say? Don’t doubt that.

Don’t doubt that there is going to be conspiratorial collusion between the anti-Trump forces that exist everywhere in the government, from the Mueller team to the Democrats in Congress, because whether you want to believe it or not, the fervor to get rid of Donald Trump, the fervor to harm Donald Trump forever is at a fevered pitch. It has not subsided. It has not languished. It has not peaked. It has continued to grow as Trump has survived every onslaught.

RUSH: Prescott, Arizona. Debbie, you’re next. Great to have you. Hi.

CALLER: Hi, Rush. This is Debbie. I have two comments for you. One of them you’ve already pretty much covered, and that’s the Mueller report that’s about to drop. I truly believe that no matter what that report says, that official impeachment proceedings will begin immediately more or less. I just think that this whole special counsel operation has been more of a persecution than a truth-seeking operation, and I think Trump is just going to have to deal with an impeachment proceeding, which is so unfortunate.

My second comment is on Michael Cohen. He is reappearing today before one of the House congressional committees, and one of the things I believe is that the reason for Cohen 2.0 is that his previous testimony failed to deliver a Trump knockout punch. So the Democrats needed time to tune him up and get his mind right. So Cohen’s reappearance today is for one purpose, and that’s to drop something that can be coordinated with the Mueller report in support of impeachment. Did the Dems get a special counsel hint of what’s coming? Probably. 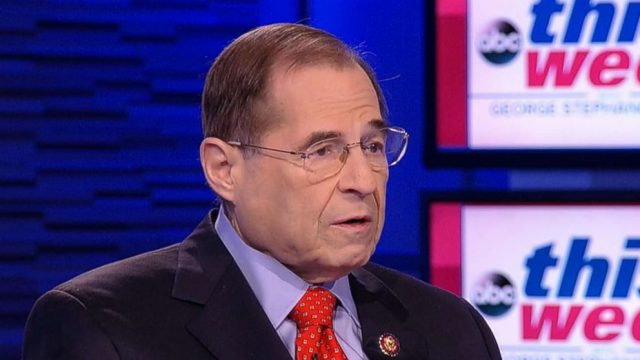 RUSH: Oh, I don’t have any doubt about that. I think the statements and the efforts of Jerry Nadler indicate some form of coordination. In fact, CNN has just had a breathless breaking news report that Cohen showed this congressional committee he’s testifying to behind closed doors “edited statement documents” from his last appearance where, if I understand this correctly, he was said to have originally lied to Congress.

I think this appearance today is to take that off the table and it show, “No, he didn’t lie. He was told to lie, and here are the edits, and what I was gonna say and what people like Trump didn’t want me to say,” and he’s attempting to show evidence or proof today that he was forced to lie. I think that’s what’s going on. So you may have a point there. But the impeachment process… There’s no question that impeachment is active, it’s on the table, and it is next up. And, I mean, actually if you — in your term you — want to look at the Mueller report as “the first step” of it, yeah.

I wouldn’t dispute this.

It’s a pull-no-punches effort to, however long it takes, nullify the 2016 election result. Even if Trump serves two terms, they want to be able to say that his two terms were nullified and irrelevant because of all of these various things over which he was impeached. I don’t have… As long as the Democrats control the House, he’s gonna be impeached. Now, you realize impeachment is two things. Impeachment is just the bringing of formal charges, and that’s what the House does, and those charges are walked over to the Senate.

The House appoints managers for each of the cases that they are charging impeachment on. There were 12 House managers for the impeachment of Bill Clinton, and part of this is payback for that. The Democrats still haven’t gotten into over that their guy, Clinton, was impeached. There’s a little payback here. But they wouldn’t even need that. They so despise Trump, they can’t deal with it. They can’t… They’ll never come to grips with Trump beating Hillary. (sigh) They’re never gonna be normal, as such, after that happened.

So the number of cases that they charge Trump with impeachment, the number of high crimes and misdemeanors, that all have to be walked across the Capitol to the Senate for a trial. The assumption has always been that if the Republicans control the Senate… See, you need 67 votes in the Senate for a conviction. That’s two-thirds. That really a high threshold. That’s a tough number to get. That’s the number you need to override a presidential veto, and they don’t have 67 votes. If Trump vetoes their refusal… If there is a Senate vote to not permit him to declare a national emergency and he goes ahead and does anyway, vetoes it, they have to come up with 67 votes to override his veto. 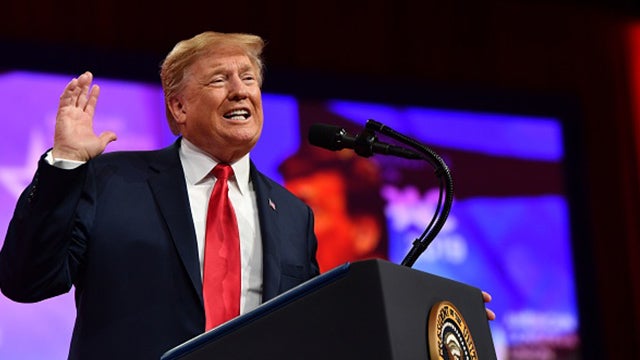 They don’t have 67 votes, at least right now, to override the veto. So they have to come up with 67 votes to convict on one or all or each of the “articles of impeachment” they are called. So the idea that there’s gonna be an impeachment is a foregone conclusion when the Democrats won the House last November. The question is, when? And there are two schools of thought on this. One school of thought is that the impeachment proceedings will commence immediately to become part of the presidential campaign to assist the Democrats in their effort to beat Trump in 2020.

“How can you vote for a guy who’s under impeachment? My goodness. This man’s a disgrace to the nation. He’s already been impeached. How dare you support him!” And then there’s nor school of thought, and it’s a minority school of thought, but that thought is that Democrats realize incumbent presidents are tough to beat, that Trump is gonna win reelection anyway and the impeachment will be for when his second term begins. That is what happened with Watergate, by the way. The original Watergate so-called crimes occurred late in the campaign of 1972.

Richard Nixon came along and beat McGovern in a 49-state landslide! So the Democrats began the Watergate hearings in early 1973, Summer ’73. That was the… Oh, I’m saying it was the… Well, it wasn’t actually impeachment. It never got that far. But it’s what the Watergate hearings were, and the way that worked out, for those of you that weren’t alive then, or were and weren’t paying attention, the hearings detailed all the news about the White House taping system and all the efforts that Nixon had engaged in to protect his people.

They never produced evidence that Nixon knew anything about the original Watergate crime, and to this day nine-out-of-10 people can’t tell you what that crime was. But the cover-up is what Woodward and Bernstein made their reputations on unraveling, and that was where Nixon was trying to protect his people: E. Howard Hunt and Gordon Liddy and The Plumbers and so forth. As those hearings occurred and more and more people testified like John Dean, it eventually became obvious that President Nixon had lost support of his party.

So they sent a big-time establishment Republican up to the White House to tell Nixon that it was over, that he had lost all support on Capitol Hill, including in his own party. That Republican was Howard Baker from Tennessee, a true establishment icon. I mean, quintessential elitist Washington member, ruling class leader. They sent him up there, and they didn’t have to go through with impeachment because Nixon resigned.

Well, that is the lesser theory of two theories, that that would be the strategery the Democrats would employ here, that it’s too soon to the 2020 election, too close to actually conduct an impeachment proceeding and trial in the Senate and conviction, and the insurance policy for Trump winning reelection would be to impeach him after that. The problem with that theory is whoever Trump’s vice president is would become president. It would not make the Democrats president.

So the leading theory is that the impeachment proceedings that are planned will be immediate and an attempt to forestall Trump winning a second term in 2020. This is all speculation, but it’s a lot of informed speculation, based on the fact that nobody has any doubt the Democrats are gonna impeach. Impeachment — again, a reminder — is not really a criminal act; it’s political. And you can’t succeed with it… You can proceed with it any time you want. If you’re the Democrats and you want to impeach President Trump?

Any time you want, you can give it a shot. But because it’s political, the only way you have of succeeding is if you have first — and Nadler even mentioned this yesterday or Monday, that they’ve gotta convince Trump voters that they (summarized) “weren’t trying to steal the elec — uhhhh, reverse the election results 2016.” They’ve gotta convince Trump voters that they’re really impeaching this guy ’cause he’s a bad guy, not because their noses are out of joint over 2016. If they’re unable… That’s why they cringe when they see Trump’s approval at 46 in the NBC/Wall Street Journal poll, ’cause it’s tough to impeach somebody at that level.