RUSH: Okay. Here we go. We’ll get started with this. House Financial Services Committee hearing about Wells Fargo bank business practices. The Wells Fargo CEO is Timothy Sloan. He testified yesterday. During the Q&A, here is Alexandria Ocasio-Cortez asking Sloan about the bank’s involvement with Immigration and Customs Enforcement… 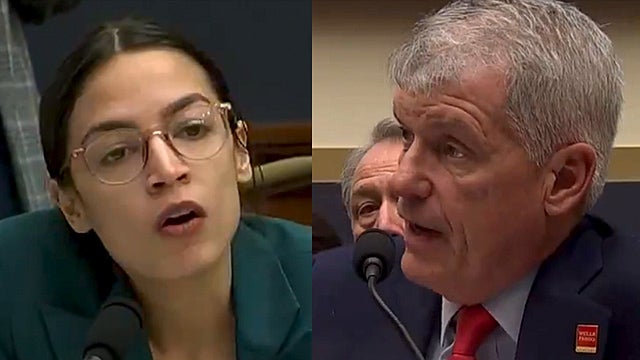 SLOAN: Uh, I — I don’t know how to answer that question because we weren’t.

RUSH: All right. Now, you know what you’re listening to here? You’re listening to a glittering jewel of colossal ignorance. (impression) “Why was your bank involved, like, in the — in the caging of children and financing the caging of children to begin with?” And this guy says, “What! Wells Fargo caging children? What — what are you talking about? Uh, I don’t know how to answer the question.” Where does this even come from?

This comes from the Drive-By Media! It was Obama who was caging children, by the way. This babe Cortez needs to go talk to Ilhan Omar. But, you know, this is all about this fake news that we were separating children from their parents and families at the border because Trump hates them and blah, blah. She just soaks it up and believes it and doesn’t even question it. So after that answer from Timothy Sloan, the CEO of Wells Fargo, Alexandria Ocasio-Cortez bore in even further…

CORTEZ: So in finance… (stuttering) You’ve… You were financing — involved in debt financing of the CoreCivic and GEO Group, correct?

SLOAN: For a period of time, we were involved in financing one of the firms. We’re not anymore in the other. I’m not familiar with the specific, uh, assertion that you’re making, but we weren’t directly involved in that.

CORTEZ: Okay. So these companies run, umm, private detention facilities run by ICE which, uhh — which is involved in caging children. But I’ll — I’ll move on.

RUSH: Okay. So here… Folks, I mean, look… Because some outfit uses Wells Fargo as their bank, little AOC here believes that Wells Fargo’s responsible for whatever the company does! So the CEO denies that they were “caging children.” I don’t even think she wrote they these questions. I think somebody wrote the questions for her. She’s stuttering her way through them. There aren’t any follow-ups here because she doesn’t even know enough to follow up.

(impression) “Okay. So these companies run private, like, detention facilities run, like, by ICE which — which, uh, is involved in caging children! But — but — but I’ll move on. So you deny it! You’re lying to me! But I’ll — I’ll move on.”

The CEO’s sitting there saying, “What? Why am I here?”

RUSH: As for Alexandria Ocasio-Cortez, you know, we can sit here and chuckle, and I meant to make this point. She’s sitting here with the CEO of Wells Fargo, “Why are you participating in the caging of children?” The CEO says, “What? I… I…” This is part of an ongoing campaign by the left to eventually pressure banks not to lend money to people the left doesn’t like, such as anybody that has anything to do with selling or manufacturing guns.

They have already commenced this kind of program, and her question basically was laying down a marker. Now, she sounds idiotic and stupid asking it, but the marker is still set down. This was an effort to shame this CEO. This guy is not gonna want any more questions about what the hell does his bank have to do with caging children. So I have no doubt here that what the left is after is to make sure that Wells Fargo and a bunch of other financial institutions eventually have nothing to do with businesses and entities the left considers to be their enemy, like guns or anything to do with them.

She also asked a question about the Dakota pipeline. (paraphrased exchange) “Why would you why would you invest in a pipeline when it leaks, when it leaks oil and destroys the environment? Why would you want that?” (sputtering) “We have nothing to do with it. We financed it. We have nothing to do with whether it leaks or not!” the CEO said. But the same marker. “We don’t think you should have financed the Dakota pipeline because it’s gonna destroy the planet,” and the CEO says, “I don’t want this grief anymore.”

So they simply refuse to finance anything that might get them in trouble with the left. This is Stalinist. This is exactly what their agenda is.

Make no mistake about it.