RUSH:  Well, thank you very much!  It’s a pleasure to have you back!

CALLER:  Well, I didn’t get on the first time; that’s why I gotta give props to your screener today.  Real good listener.  But, anyway, I tried calling a couple years ago on this topic. You go back to 2016… Well, first of all, you had a caller earlier, a Catholic, bemoaning her liberal leader and climate change and —

RUSH:  Well, no, no.  She was… No, no.  No, no.  She was from Texas and she was bemoaning fellow Catholics and conservatives who were buying into this stuff, not just liberals.

CALLER:  Right.  Well, I’m a lifelong Catholic as well, born in Chicago, raised in Ohio. But luckily, I’m in Tennessee now.  But still —

RUSH:  Wait a minute.  You were born in Chicago?

RUSH:  Ever since Il Papa Francesca, whatever, yeah.

CALLER:  Well, I’m talking before that even with the issues in Boston and Newark and all the Northeast.  But for all my life, the Catholics I’ve known lean Democrat and lean liberal, and that just seemed to be the way it was.  It actually was that way, but I was surprised as I grew older to find it being so prevalent.  In 2016, though, the National Catholic Register — which can be a liberal rag. But as you’ve got these top church officials falling away — and they’re all liberals that are going down — you have some conservatives or at least fair-minded writers that for the first time in my life, in 2016, did a long deep dive into each candidate on abortion and said, “You could not vote for XYZ in good conscience as a Catholic.”  I’ve just never seen them do that on anything more than your, you know, private breakfasts or —

RUSH:  Okay.  So what are we driving at here?  What is your point?

CALLER:  For the last… For as long as they’ve kept records, the Rust Belt has gone Catholics to Democrats.  Catholics have put Democrats in office throughout the area.  But in 2016 — and I believe this came from the LA Times, and I followed them only because they had it right —

CALLER:  The point is, the Catholics in Pennsylvania, Ohio, Indiana, Michigan, instead of going 70-30 for Democrats, they went 65-35 for Trump, even though they are Democrats.  And with this latest push to legalize the murder of babies that somehow surviving abortion, the stance will be even stronger —

RUSH:  Oh, I agree with that.  Okay.  Now we… This is why host patience is paramount.  This is why.  ‘Cause you’ll always get there if you just wait. Not only do I think you’re right, I think it is having an impact that is not being reported on because the media’s not touching it. (Southern impression) “But old Ralph Northam and that blackface story? That is the secondary to what really upset people about Ralph Northam — and then those clowns in New York and in Chicago doing the same damn thing, killing babies after they come out of the womb!”

I’m telling you, folks, the American people — people you’ve never heard of and you don’t know — are noticing this, whether they’re Catholic or not.  I really do believe that the more Democrats speak up, these candidates particularly — and more of this apocalyptic, “We’re 12 years or we’re done, 12 years or we’re extinct,” you can just… I can see. I can literally see the number of people making up their minds to vote for Trump who want to do it right now, who don’t want to wait ’til 2020!

You know, whether it’s rooted in Catholicism or not, I don’t think they are aware of the impact they’re having.  You know why?  Because they don’t care.  The Democrat Party and the Washington establishment still, to this day, do not care about the people who voted for Trump.  They’re still condescending to them and toward them, and they’re considering to laugh at them and consider them irrelevant and that 2016 was a one-off and it isn’t gonna happen again.

And they’re not making any effort whatsoever to understand — even now — why Trump got elected.  They’re lying to themselves about why, concocting stories.  Some of them believe Russian interference.  Some of believe Hillary was a rotten candidate (which is true), but they still think it was a one-off, and they think the opposite. They think that more people are repulsed by Trump each and every day, and that’s why so many Democrats are running, because they think they’ve already go on this in the bag.

Now, some Democrats I’m convinced already think Trump’s gonna get reelected, the smart ones, and that’s why they’re taking steps to get the impeachment process laid out and set up for after 2020. But it is clear as bell to me the Democrats — you know, let me use this analogy. Sports mascots. My all-time favorite sports mascot was the San Diego Chicken, Ted Giannoulas. He started out as the San Diego Chicken and he would show up at San Diego Chargers games and so forth. 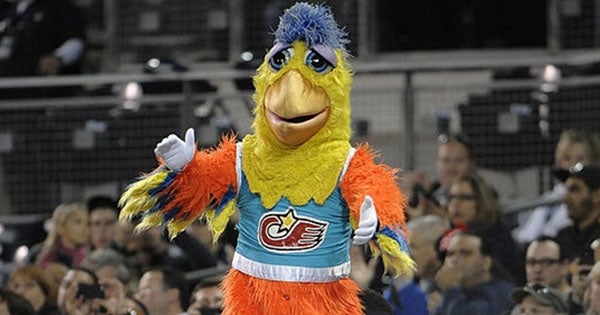 He eventually became the Famous Chicken and would hire out and go anywherre. And then the Philly Phanatic was awesome, Fredbird in St. Louis. But all the successful mascots had one characteristic that I think — this is just me. You may think this is crazy and irrelevant. But I think in order for somebody running around wearing a chicken suit or a Phanatic suit or a Fredbird, for those people to connect to the audience, it’s more than just doing funny things.

But Giannoulas, who I got to know when I worked at the Royals, he knew exactly that his chicken head had those drooping, sad eyes, and they were crucial to his routine. The chicken was akin almost to the coyote in Road Runner and Coyote. The Philly Phanatic had an entirely different personality. But each one these people had to have an ability to know how they appeared, both physically as they went through their routines, and just walking around.

And I think everybody successful in business has to have that ability. How do people see you? And I don’t mean in just an image sense with a PR manufactured campaign, but how do people see you, the way you dress, the way you carry yourself, do you smile or not, those kinds of things. I don’t think the Democrats have the slightest ability right now to understand how people see ’em. And I think Donald Trump does. I think Trump knows exactly how he is seen and feeds it. 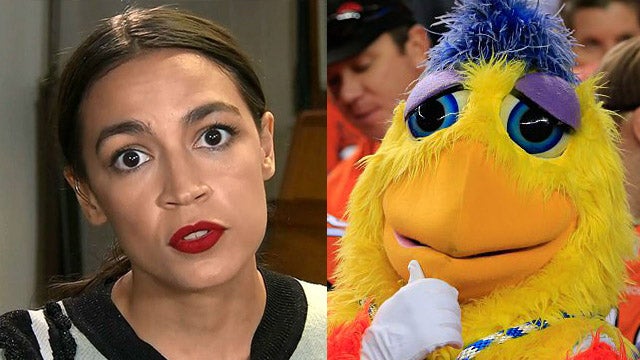 And, as such, I don’t think they realize when they announce this stupid stuff like 12 years and we’re all dead, get rid of airplanes. Take the specifics away, just the overall generic, don’t even have to get in the weeds in this stuff, just the generics of what they’re saying is not what people want to think their country is, and they don’t want to have to live the next 12 years of their lives being taxed out of prosperity in order to save themselves when they don’t even think they’re imperiled.

And yet there the Democrats are demanding even more from everybody else. Now we learn they’re rigging admissions into major universities in their own favor using their own white privilege. You know, we always say hypocrisy never sticks to ’em, never attaches to ’em. It doesn’t in terms of media. Media never hones in on their hypocrisy, but I think it’s starting to be noticed big time.