If You’re Souring on Fox News, You’re Not Alone

CALLER:  Hi, Rush.  It’s a pleasure waiting.  Everyone has these lightbulb moments, and mine came today listening to you with my headset on. I decided that I’m gonna take the Rush Limbaugh challenge, and from 12 to 3 every day in my business, my headphones come off and the whole business is gonna listen to the Rush Limbaugh Show.  If my patients and my gym clients don’t like it, well, God bless America. They have choices; they could go elsewhere.

And for all the corporate Fox News savants listening to this: Fox News used to be on my TVs. After their conscious decisions to alienate a judge, hire a degenerate from CNN, a back-stabbing opportunist person as Paul Ryan to run their corporation, they have just, if possible, blown their alienated base out of proportion — and you, Rush Limbaugh, and Donald Trump, your viewers, into the stratosphere, the absolutely stratosphere.  I am so heated by — 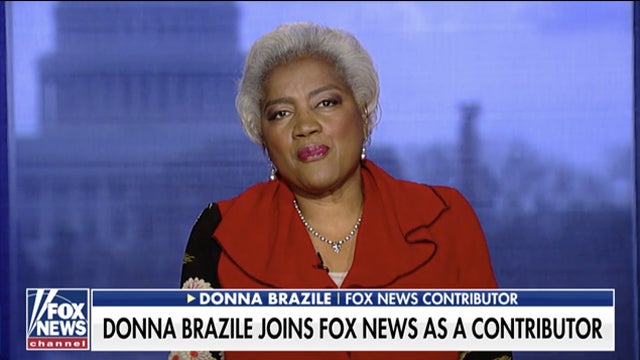 RUSH:  Okay.  Okay.  Let me go back to the beginning here.  You obviously have a business of some kind where this program and others are on where people in your office or whatever can listen.  Is that right?

RUSH:  You’ve decided that from now on you’re gonna take my advice, turn off the cable news, and just exclusively make this program available to whoever is in your office able to listen.  Is that right?

RUSH:  Okay, and the reason that you’re doing this is because finally Fox News went too far. You have to throw them overboard because…? Run through the list again what happened?

CALLER:  Sure.  They made a conscious decision to sanction a judge — 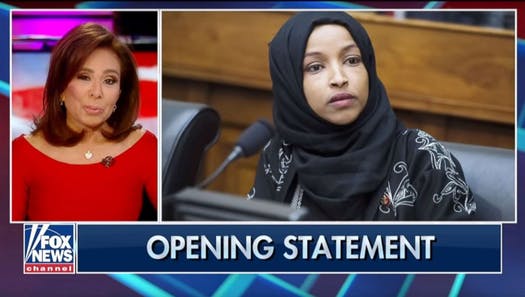 CALLER:  They hired a degenerate that couldn’t even make it on CNN, Donna Brazile.

CALLER:  And they hire an opportunistic, back-stabbing Paul Ryan to be on their board of directors.  He is only used Donald Trump to get that tax law passed, and after that it was, “See you later, America. I’m gonna take care of myself,” and I am so… For the savants of Fox News corporate who listen to this show — ’cause I know they do — they don’t need to strain their brain.  They could go on Twitter, Facebook, and all over.  There are millions of Fox viewers who are looking for alternatives.  I don’t need to look.  I strained this morning. I called Comcast. “What am I gonna do?” and then today I thought, “Oh, wait, I’m gonna take the Rush challenge: 12 to 3, that’s all I need.”

CALLER: It’s all I need! I’m gonna be happier.

RUSH: Okay. Back with Carolyn here in West Haven, Connecticut. I wanted to explain these things that you addressed. Let’s first start with Judge Jeanine. Judge Jeanine got in trouble for saying something about the new esteemed congresswoman from Minnesota, Ilhan Omar, saying that a woman who wears the hijab cannot be compatible with the U.S. Constitution if she believes in Sharia law. And if she’s wearing the hijab, she believes in Sharia law, and it’s not compatible — you know, can I ask you something, Carolyn? 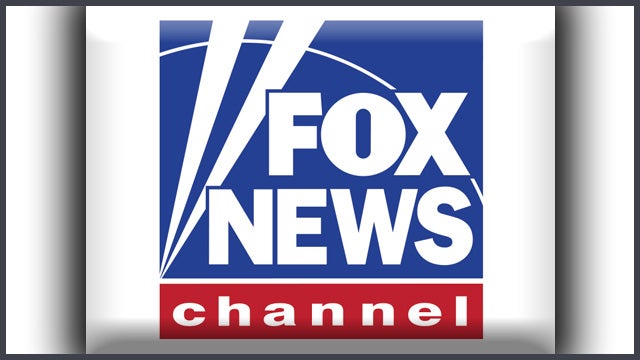 Do you find it fascinating – it’s something I still don’t really have the explanation for, it’s so weird. We are attacked on 9/11, 3,000 Americans are killed by militant Islamist terrorists on 9/11, 2001. And ever since then we have been portrayed as the problem and not them. And we have been seeking their forgiveness, and we have been apologizing to them, and we have been going out of our way to prove to them that we have nothing against them.

We didn’t blow them up. They blew us up on 9/11. Now, they’ll claim, “Well, but you’ve been blowing us up in the Middle East.” It’s all about our support for Israel. But it has just blown my mind how, after 3,000 Americans are murdered on 9/11, that we apologize, and we’ve been apologizing since that date. And we have been begging forgiveness, and we’ve been making sure there isn’t any Muslim backlash.

And, meanwhile, Christians are being slaughtered all over the world, and the media doesn’t cover it because it doesn’t fit their narrative. So here comes Judge Jeanine simply voicing this, and I’ll tell you who got her I think suspended. There’s a story going around, I guess Twitter, that Bret Baier demanded this inside Fox. Folks, that is not true.

This is directly from CAIR, Council for American-Islamic Relations. They’re the ones putting all kinds of pressure here. But there’s nobody inside Fox that is responsible for demanding that management sit down Judge Jeanine for a while. You mentioned Paul Ryan. What was the other thing you mentioned besides —

RUSH: Well, you know, she’s not the first liberal Democrat Fox has hired. They’re all over the place on Fox. Why does this one bother you so much?

CALLER: She got caught cheating. She was fired from CNN. Could Fox not find another person without a background? They’re sending signals to their audience where their viewership is going. There’s no reason — Judge Jeanine didn’t say anything — she didn’t hyperbole it, she didn’t add adjectives. She just stated a fact. I stand by her and her decision.

RUSH: Well, this is my point, that Judge Jeanine says something that’s arguably not false. It fits the mold here that somehow after 9/11, ’01, we’re the ones that have to apologize, we’re the ones that have to excuse ourselves and ask for forgiveness. Doesn’t make any sense to me. I’ve never understood — you know, the State Department within a month after 9/11 convened a forum for State Department employees, the title of which was, “Why do they hate us so much?” As though 9/11 was our fault. We had to come to some kind of understanding, why did they do this to us? It must be something we’ve done. The United States was therefore guilty. I saw that, and think this is happening in the Bush administration.

I understand your pique about Donna Brazile. She did funnel town hall questions to Hillary. And she did run the DNC during the, shall we say, hacking of the DNC computer scandal and all that. I can’t explain to you why she was hired. I could only speculate. And it would be along the lines of Fox is being targeted by a bunch of people and they’re trying to make themselves a smaller target by showing how fair and balanced they really are, something like that.

CALLER: They’re losing, Rush, because their audience is gone and the advertisers will go to you. Donald Trump is going to get reelected because he is real people, not a politician. And Fox News is just losing the battle. They’re going to lose more viewers from these decisions they just recently made. 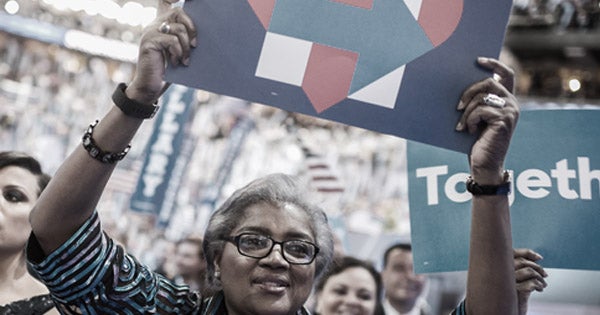 RUSH: Well, we’ll see. We’ll see. They’re still cleaning everybody’s clock, particularly in prime time. They are cleaning in what is called the opinionated portions of the Fox —

CALLER: Well, there is a low bar to follow. The clock’s not so big. It’s not really who’s out there. Put them up against you, they’d lose. I mean, you know, set a bar higher than the other people that they’re going — set a bar higher than CNN, MSNBC. They don’t have much of a leap and bound to go.

Look. You mentioned Paul Ryan. Now, what’s happening here, Fox is being spun off. It used to be 20th Century Fox, 21st Century Fox, now Fox has done this gigantic deal with Disney, and Fox has gotten very much smaller. They’ve gotten rid of all the movies, all the television studios and so forth, and now it is the TV stations, the Fox News Channel and some other things.

And Rupert Murdoch’s son Lachlan has been put in charge of it and it is Lachlan Murdoch that went out and got Paul Ryan for this new company to put Paul Ryan on the board. This is commonplace. I mean, this is how crony capitalism or whatever, crony socialism works. Ryan, even though he’s not in government anymore, still has a lot of sway there, still has a lot of power.

It’s like Apple hiring Algore for their board. This is a way corporations interact with Washington. This is how they do it. You’re expecting Fox to be loyal to the audience, and in your view, Paul Ryan is considered a bit of a problem ’cause he didn’t support Trump and therefore Fox should have nothing to do with him.

RUSH: And that’s not how Fox looks at it.

CALLER: Well, they’re gonna be looking in the rearview mirror, then, because —

RUSH: Well, I can’t get too deeply into this ’cause there’s some stuff I’m not supposed to know. But there are real concerns over — you know, for the longest time — folks, let me just put it this way. For the longest time, even back when Roger Ailes was the chairman and CEO, the grand pooh-bah, there were fears that elements of Fox management didn’t like Fox as a conservative news channel because they aren’t conservative, and they wanted to move it off the conservative identity and move it back toward the middle.

Well, that theory has arisen again. And that theory is now rooted in the fact that there are now two different Fox News Channels. You’ve got the prime time, which is where the opinionated conservatism is: Tucker, Sean Hannity, Laura Ingraham, you know, the 8 p.m. to 11 p.m. block. And then the rest of the news channel, they think they are the day-to-day journalists, and they are complaining that the identity, the strong identity theft of the opinion programming in prime time is tainting their image and their work as journalists, and they don’t like it.

And so there are rumors that eventually, not tomorrow, not any time soon, but this new Fox is going to change some of the prime time programming, make it less hard-hitting conservatism and so forth. Nobody really knows. These are just rumors that are floating around and circulating.

And they’re trying to create this impression that half of Fox is at war with the other half of Fox. That the, quote, unquote, daytime Fox, the Shepard Smith Fox, the journalists at Fox are very, very, very happy with the prime time Fox, and the effort to create this picture of conflict and the need to resolve that conflict.

It’s also kind of scary to a lot of people because she didn’t say anything that is confrontationally controversial. She just said some things that you’re not supposed to say about Sharia and Islam. And if you couple that with the — I mean, the slaughter of Christians around the world is something that’s real and not being reported on ’cause it doesn’t fit the narrative of the media.