RUSH: Fast Eddie Rendell, the former governor of Pennsylvania, the former mayor of Philadelphia, and he used to throw snowballs on visiting teams like the Dallas Cowboys at Philadelphia Eagles games. He’s a good guy. He’s okay. You know, when you talk about your grandfather’s Democrat Party back when they were just standard, ordinary liberal? The kind of people that would collude with the Soviet Union to undermine Reagan? That’s Fast Eddie. All right? 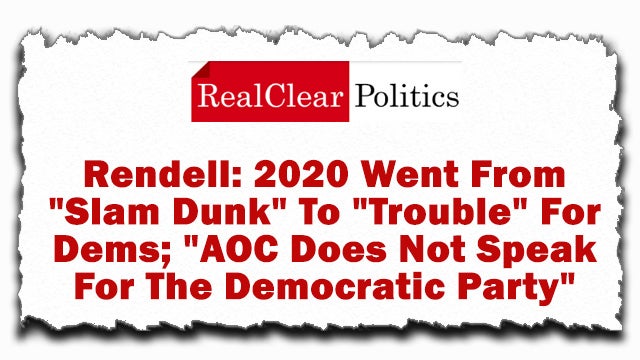 He’s very worried. Fast Eddie is very worried. He says that the 2020 election has gone from “slam dunk” to “trouble” for the Democrats, and he openly says that Alexandria Ocasio-Cortez “does not speak for the Democrat Party.” “Former DNC chairman Ed Rendell (D-PA) advised 2020 Democratic presidential candidates to look toward the center and not to the far left. ‘I think all of a sudden, the 2020 election went from a slam dunk for Democrats to something where we’re going to have trouble beating this guy because he’s going to make Democratic socialism swing to the left, which I don’t think is real, but he’s gonna make it…'”

But that makes him today on the outside looking in. Fast Eddie is a white-privileged, nonsocialist male, which means that he’s been slotted into the less-favored DNA bin of the socialist Democrat warehouse. Fast Eddie has less-favored DNA. He’s not the kind of Democrat this new crop wants to make their party an image of, and what Fast Eddie doesn’t know is that he doesn’t speak for the Democrat Party anymore. The media does. The media speaks for the Democrat Party, as well as Republican Never Trumpers. And if the media chooses AOC as their preferred mouthpiece and eyes, then that’s gonna be the deal. It doesn’t matter if Fast Eddie is right that AOC is a poison pill for his party. He’s on the outside looking in.