RUSH: Do you all remember a guy named Ralph Peters? Ralph Peters used to be a regular commentator on Fox News. He had an opinion column in the New York Post. He was a highly respected, highly reputed military veteran/military analyst. He was very patriotic, pro American. But he couldn’t handle Trump. He left Fox because Fox was too pro-Trump; it made him nervous. He thought Trump’s a reprobate and a creep, and he became a Never Trumper. It was sad to lose Ralph Peters from our side. 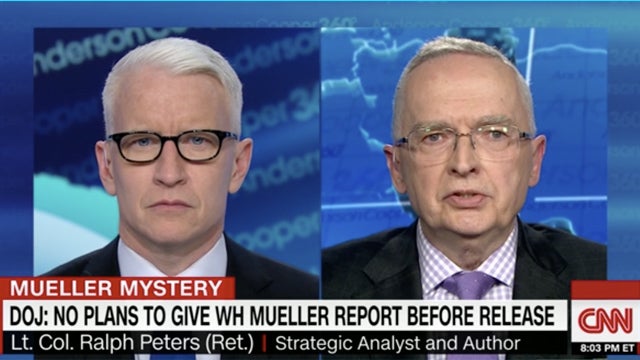 But we lost Ralph Peters.

Ralph Peters just couldn’t stomach working at Fox News with their so much support for Trump when he thought Trump was human debris. Well, last night on CNN, Anderson Cooper had Ralph Peters on as a guest. The question is: “The president said one thing, which is, ‘Wouldn’t it be great if we could get along with Russia? It’d be a good thing and not a bad thing.’ Might it also be as simple as him having an affinity for strong leaders or wanting to emulate them or being intimidated by them?”

PETERS: I go back to what so far has not been addressed, the Steele dossier — and it’s been pooh-poohed and mocked. But that is the way the Russians do business. Given Trump’s behavioral profile, he was a perfect target. And, y’know, if you want various explanations, the Steele dossier is one viable one. We need to know whether or not Vladimir Putin… whether he has any sort of control over the president of the United States. Why does Trump have to meet with him behind closed doors without witnesses? And I can’t let it go. I just can’t let it go. The Steele dossier just rings true to me.

He’s not somebody’s butt boy. Certainly not Putin’s. What are you…? This is just… You’re really, really difficult to comprehend. These people… If you notice Anderson Cooper’s question here is, “The president said one thing which is, ‘Wouldn’t it be great if we could get along with Russia.'” Well, wait a minute! What the hell’s wrong with that? You leftists have been pushing for utopia for as long as I’ve been alive!

Which would be getting along with everybody. You’re the ones that never saw any problem with the Soviets. You never saw a single problem with Gorbachev or Andropov or Brezhnev or Khrushchev. You loved those guys! You loved the Soviet Union! Ted Kennedy was writing letters to Khrushchev and Andropov telling them to be patient while the Democrats in the Senate undermined Reagan! So Trump says, “Wouldn’t it be nice if we could get along with Russia?” and somehow this validates the Steele dossier?

It’s like that idiot Brennan literally falling for a Trump joke! Brennan was out saying, “I have proof of collusion! Trump asked the Russians to hack Hillary Clinton’s emails.” John Brennan obviously doesn’t have a sense of humor. Nobody on the left has much of a sense of humor. They don’t laugh. They don’t crack jokes. They get offended by jokes. They clearly have no sensitivity for satire. They don’t even know when they are being mocked and made fun of, which is what Trump was doing with that comment.

And the same thing here: “Wouldn’t it be wonderful if we could get along with the Russians?” He knows he’s triggering these fools like Anderson Cooper. “Oh, my God! See! Oh, my God! He’s sending a message he wants to work with and help Putin.” They’re so blind, it’s unreal! And to learn the extent to which people that we thought we could trust are so easily fooled because they don’t have a sense of humor or because they have such bias?

And in that bias, is rooted so much personal hatred and disgust for somebody like Trump, “Because he’s just not one of us. This is so bad.” The Steele dossier? That is what you can’t let go of? The Steele dossier is a hoax. It’s all they ever had. There was nothing but the Steele dossier, and it was bought and paid for by Hillary Clinton! How can Ralph Peters not know this — and if he knows it, how can he not factor that into this equation?

RUSH: Last night on the Fox News Channel, Eric Swalwell… It’s not a name you can pronounce fast. Pronounce it fast you’ll say it “Small well,” but it’s not. It’s “Swal well.” He’s a Democrat in California, and he’s one of these really smooth-talking leftists. He is an extremist radical that doesn’t look like one or sound like one, but he is. He is every bit the radical that Pencil Neck Schiff is. He’s every bit the radical as Alexandria Ocasio-Cortez is. And, by the way, we’ve got great audio of her coming up losing it during a hearing on the New Green Deal.

Last night, Martha MacCallum got Swalwell to come in as a guest, and she ended up staring at everybody in total disbelief at what Swalwell was trying to pass off. She couldn’t believe what she was hearing! Nor could the audience. Question: “The president, in your words,” Congressman Swalwell, “was a Russian agent, and he had worked with the government through his campaign to throw an American election. Is it not time for a little bit of reflection on everything that has happened?”

She’s basically saying, “Do you want to walk this back now? We know that Trump was not an agent of Russia. He was not undermining the United States. He didn’t collude with Russia. Your very special counsel has said so.” She didn’t say that the people working with Russia were your people, Mr. Swalwell: Hillary Clinton and your pals at the FBI and in the intelligence community. She didn’t say that, but it’s implied. Your people are the ones that tried to act with Russia. You’re the people that have some explaining to do. But she said (paraphrased), “Do you now maybe want to reflect on this, maybe pull back on this notion that Trump is a Russian agent?”

SWALWELL: Donald Trump acts in Russia’s behalf. When he meets with Vladimir Putin, he won’t tell the country what was said, and he essentially took the notes from the interpreter. That really worries me. Just because he’s not been criminally indicted for collusion doesn’t mean he has [sic] conducted colluding-types of behavior with the Russians. We’ve seen this president have his campaign take meetings with Russians where dirt was offered. We’ve seen the president say on a stage, “Russia, keep hacking,” and we’ve seen the president constantly lie. If the best day of his presidency is that he’s not been indicted for criminal collusion, we still have problems, and that’s what I think should be addressed by seeing the full Mueller report.

There wasn’t even any evidence of it. This whole thing is so bogus, and even he’s going down the same road that Brennan went down. “Yeah, he’s telling Russia to hack Hillary’s emails.” You people need to get a life. You people really just need to dial it down a little bit and get a life. You just can’t see it when you’re being mocked and made fun of. You’re out there claiming for months that the Russians hacked your DNC servers? Do you know there still isn’t any evidence for that, folks?

Do you know there still isn’t any evidence that the DNC computers were hacked by Russia? There isn’t any — and WikiLeaks maintains that whatever they got from the DNC server did not come from Russia. And the Podesta emails ended up being made public because he fell for a phishing attack, a simple phishing attack in his regular email. The DNC server, nobody has proven the Russians hacked it. So Trump’s out there making fun of you people and laughing at you. “Hey, Russia!” ’cause the media’s going nuts about Hillary’s missing emails and where are they.

So the media can’t find ’em, and the Democrats can’t find ’em, and Hillary can’t find ’em, and everybody wants ’em. So Trump says (paraphrased), “Hey, Russia! They’re saying you’re hacking everybody. If you’ve got the Hillary emails, could you let our media know?” and these people fall for it, and they believe it! And they’re still being guided by it. “We’ve seen this president have his campaign take meetings with Russians where dirt was offered.” There wasn’t any dirt offered. That’s the Trump Tower meeting.

There wasn’t any dirt offered. That was the whole point of it! It was a setup meeting for the Russians to push an agenda they care about regarding adoption. This is so… Anybody can know this! “We’ve seen the president say on a stage, ‘Russia, keep hacking.'” (laughing) He didn’t say, “Keep hacking.” He said (paraphrased), “Russia, maybe you’ve got Hillary’s emails. If you don’t, could you find ’em?”

They were missing! The media wanted them. Hillary said she took care of them. At the time, Kim Dotcom was out saying, “I got ’em. I know where they are.” It was an excrement show, and Trump got in on it by telling a little joke mocking all these people — and they still don’t get it like Brennan didn’t get it. So after this, next question: “Would you say that there is anything at this point that you regret having said?” 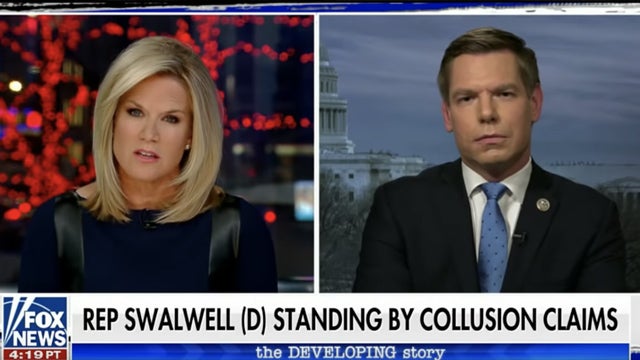 SWALWELL: No. I — I feel very strongly that no candidate, no president-elect, no president should have conducted themselves the way that Donald Trump has with Russia. He’s drawn us so close to a foreign adversary, and I’m gonna do everything I can — as long as I’m in power — to always put the United States first.

MACCALLUM: So it doesn’t bother you that the Clinton campaign paid for a dossier to be put together by someone who had all kinds of ties to intelligence and put together something that — that turned out to be not necessarily factual? (crosstalk)

SWALWELL: Which part of it hasn’t been proved factual?

MACCALLUM: Well, Christopher Steele himself said it was not a finished work product —

SWALWELL: He didn’t say it wasn’t factual, though!

MACCALLUM: — and, you know, everyone who analyzed it —

SWALWELL: Which part was not proved factual?

MACCALLUM: Are you serious?

RUSH: “Are you serious?” “Which part of it hasn’t proved factual?” None of it, Swalwell. None of it. Christopher Steele had to disavow it, Swalwell, when he was under oath in the U.K. Christopher Steele has disavowed his own dossier. None of it is true. None of it’s been verified. This guy is running around, “Tell me what hasn’t been proven true.” These people are living a lie. They are living a delusion. They are totally immersed in fake news and they can’t give it up, as you hear. They cannot give this up. This is deep, deep pathology here, folks — psychology, psychopathy, whatever. There’s something really, really — and not just one of them.