Trump Calls Out the Coup

RUSH: This is President Trump today outside on the White House lawn. He’s making his way to Marine One, the helicopter to leave on his trip to San Antonio to open some oil and gas wells. As he always does, he spoke with the reporters. Oh, I just saw… Folks, pardon me, but I have to comment again. They’re playing video of the Barr hearings today, and during the hearings, Senator Graham…

You know, Barr made the point (paraphrased), “Why…? If you think the Russians are spying on the Trump campaign, why would the FBI not tell the Trump campaign? I don’t understand this. If you think a foreign entity is trying to interfere in the election and you know that they’ve got spies and you think it, why wouldn’t you tell the candidate?” So Lindsey Graham pointed out, “Well, that’s a good point, Mr. Attorney General, because when it was discovered that there was a spy on the staff of Senator Feinstein as her driver for 20 years, they told her.”

Well, the camera then cut to Senator Feinstein as Graham was saying that, and the moment they cut to Feinstein with the camera, an aide was whispering into Feinstein’s ear. She may not have been paying any attention. The aide was probably telling her, “Yeah, they’re talking about the fact of your Chinese spy, your driver. They’re bringing that up now.” She’s nodding her head. And then he keeps talking to her, and I said, ‘What is there is to say here?” 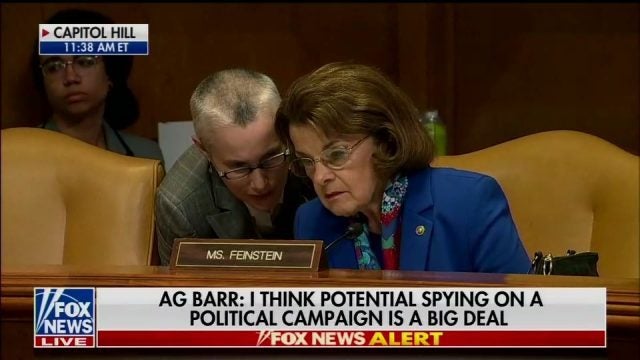 Maybe there’s more than one spy and he’s explaining to her which spy Graham’s talking about.

THE PRESIDENT: It was an illegal investigation. It was started illegally. Everything about it was crooked. Every single thing about it. There were dirty cops. These were bad people. You look at McCabe and Comey, and you look at Lisa and Peter Strzok. These were bad people, and this was an attempted coup. This was an attempted takedown of a president, and we beat them. We beat them. So the Mueller report, when they talk about obstruction? We fight back.

And do you know why we fight back? Because I knew how illegal this whole thing was. What I’m most interested in is getting started. Hopefully the attorney general — he mentioned it yesterday; he’s doing a great job — is getting started on going back to the origins of exactly where this all started. Because this was an illegal witch hunt. And everybody knew it. And they knew it too. And they got caught. And what they did was treason. There’s never been anything like it in the history of our country.

RUSH: Man, oh, man, that’s just calling it out. And Barr is the person that made this possible by announcing yesterday that he didn’t believe any of this, there was collusion or any of that, and then today saying that he’s gonna investigate the investigation. He’s gonna find out how the hell did this happen, why did this investigation happen. He’s gonna look into it. 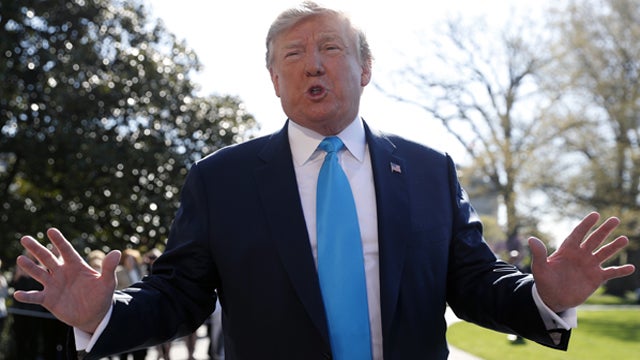 The president claims he hasn’t seen the report, hasn’t seen the summary, hasn’t seen anything, but he’s obviously confident enough now to go out and call it what it was. By the way, I think it’s ongoing. This is a point that I have continued to make. This is not, it never has been, an investigation. It is an attempt to overturn the election results of 2016 and get rid of Trump. And that effort is underway, it’s ongoing, and it isn’t gonna stop.

Now, there is gonna be some accountability for the people that were responsible for this, and there’s gonna be a lot of quaking in the boots for a lot of people at the FBI and some of the intelligence agencies, Brennan and Clapper and the media is gonna be included in this. But it’s not gonna stop them from attempting to ruin or damage Donald Trump. But running around calling it what it is, this is language that legitimate members of the Washington establishment do not use.

Even the victims of these kinds of political plays are not to ever accurately describe what happened. If you’re an acknowledged member of the establishment and for any reason the establishment turns on you, you are to take it. You are to deal with whatever they dish out. And if they fail to take you out, you are not to gloat about it, and you’re not to call them out on it. You are to accept that they failed and move on.

And Trump is not doing any of that. He’s calling them out for who they are, what they did, how they did it, and he’s not gonna stop until everybody knows. Another reporter: “Have you ever thought about making Stephen Miller the secretary of Homeland Security?”

THE PRESIDENT: Now, Stephen is an excellent guy. He’s a wonderful person. People don’t know him. He’s been with me from the beginning. He’s a brilliant man. And, frankly, there’s only one person that’s running it. You know who that is? It’s me.

RUSH: Oh, that reminds me. There’s another Trump controversy out there. Somebody has — it’s TheHill.com, Aris Folley. Headline: “Trump Wondered Why Washington Didn’t Name Mount Vernon After Himself — President Trump reportedly wondered during a visit to Mount Vernon last year why George Washington did not name his historic compound after himself.”

They claim that Trump said during a tour of Mount Vernon last April (paraphrasing). “Hell, if this Washington guy was so smart, he would have put his name on it,” according to three people, not named, briefed on the exchange talking to The Politico. They say Trump said, “You’ve got to put your name on stuff or no one remembers you.”

“Mount Vernon president and CEO Doug Bradburn, who served as the VIP tour guide for the visit, noted that the first president was successful in getting the nation’s capital named after himself, according to Politico, to which Trump conceded laughingly.” 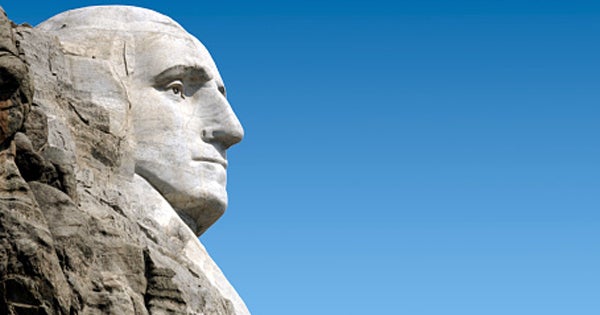 (imitating Trump) “Yeah, that’s a pretty good deal, got a town named after you, okay, that’ll work.” It’s more evidence they have no idea of Trump’s sense of humor. They have no idea of his personality. They have no idea who he is, and they are wound so tight that it is impossible for these people to lighten up. They cannot possibly see the joke or the humor in Trump saying, “What good is this place if he doesn’t name it after himself?”

Trump may as well have said, “Washington should have named his jet after him like I put Trump on my jet.”

“Mr. President, Washington didn’t have a jet. There were no airplanes.”

“Well, you know what I mean.” George Washington is one of the Founding Fathers who doesn’t get, in the modern era, nearly enough education. People are not taught anymore nearly enough about George Washington. And I’m thinking of correcting that at some point, maybe even on today’s program or later on during the week.

We have time for — no. Let’s take the break. We’ll come back, and we’ve got more Trump talking to the press on the way to Marine One.