NYT: Face It, You Probably Got a Tax Cut

RUSH: As you may know, the Drive-By Media has, since the day Trump tax cuts were passed, been reporting story after story after story, and the stories of course have been on CNN and MSNBC, the Washington Post, New York Times everywhere, that the Trump tax cut was not a tax cut. That Trump’s tax cut is costing you money, that nobody’s gonna get a refund, that nobody’s refunds are gonna be any bigger, the refunds are gonna be smaller, and it’s all been lies, folks, it has all been fake news! 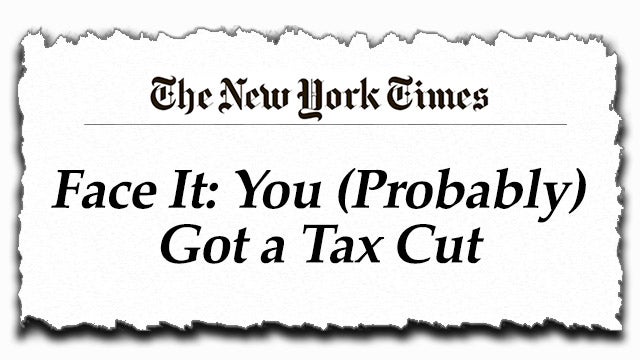 People are getting refunds this year that they weren’t expecting. The child tax credit exemption has been doubled 2,000 to 1,000. There are people getting tax refunds they had no idea they were gonna be getting until this tax cut kicked in. But there’s the media lying through their teeth trying to condition people that the tax cut was only for the uber-wealthy and in fact you were gonna end up paying more.

So now we have in the New York Times a story from yesterday, headline: “Face It: You (Probably) Got a Tax Cut — Studies consistently find that the 2017 law cut taxes for most Americans. Most of them don’t buy it.”

Now, what could cause most of them to not buy it? It would be people like you, New York Times. This is the power of fake news to propagandize. Let me give a couple pull quotes. “Ever since President Trump signed the Republican-sponsored tax bill in December 2017, independent analyses have consistently found that a large majority of Americans would owe less because of the law. Preliminary data based on tax filings has shown the same.

“Yet as the first tax filing season under the new law wraps up on Monday, taxpayers are skeptical. A survey conducted in early April for The New York Times by the online research platform SurveyMonkey found that just 40 percent of Americans believed they had received a tax cut under the law. Just 20 percent were certain they had done so. That’s consistent with previous polls finding that most Americans felt they hadn’t gotten a tax cut, and that a large minority thought their taxes had risen.”

They know how important the economy is as a factor in elections. They know it so they have been trying to tell people the economy isn’t as good as it is and it’s gonna get worse while it’s gonna get better. And they’ve been lying to people about the tax cut. They can’t afford for people to think tax cuts are good! Because liberalism is gonna raise taxes like you’ve never seen! They want you conditioned to think that’s the only time you should be happy is when your taxes are going up. That when Republicans announce tax cuts or even pass them, you end up paying more. It’s a giant scam, the media says.

RUSH: Midland, Texas. Reed, hi. Great to have you on the EIB Network. Hello.

CALLER: Hi sir, from Midland, Texas. I just wanted to share a note I got from my CPA today that showed an overpayment of $18,929 from last year, so that’s what the overhaul all of the —

RUSH: Meaning you’re getting a refund of 18K?

CALLER: I overpaid $18,000 from my quarterly taxes last year.

CALLER: Yeah, but the overpayment is the — yeah, it’s the return —

CALLER: Well, see, I still owe 16 grand from the year before, from the previous administration’s taxes.

RUSH: Oh, so you’re facing basically a wash here because of the Trump tax reform.

RUSH: You’re having what you owed essentially zeroed out?

CALLER: Yes, sir. And it’s huge for my small business. I think I’m gonna be able to hire a full-time employee finally.

RUSH: Take the load off of you a little bit?

RUSH: Well, a lot of people I am told are discovering this. But folks, I have to repeat this. Ever since tax reform was passed in late 2017 the media has gone to great lengths with fake news to tell everybody that the Trump tax cut was phony, that you aren’t gonna see any indication your taxes have been cut. In fact, you may see that you’re paying more. And that was a reference to people in the blue states who don’t get to deduct more than $10,000 of their federal taxes on the state and local return. 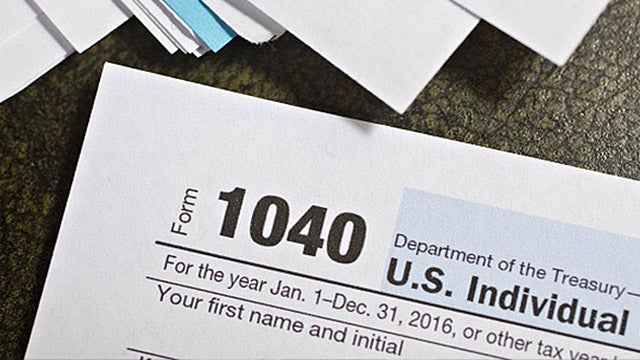 But there’s no way that a tax cut of this size can be hidden once it’s time to actually file, and now people’s refunds — I know a Millennial couple who waited ’til the last minute to prepare, they believed, they bought it, they believed they weren’t gonna get any kind of a benefit at all, that it might even be that they were paying more. Their refund’s $3,800 bucks, they have twins, and because the child exemption or whatever it is has been doubled from a thousand to $2,000, they’re getting a huge refund, it’s a total shock, they had no idea.