And you know what it was? That he one time said “all lives matter.” Oh, he did! So here come the White Walkers of the left to come in here, the marching dead from the left to try to start the process of taking out Mayor Pete.

So Bernie’s raised this and whoever else, but in all of that time we never had any news about President Trump and his fundraising because in his campaign, fundraising in 2016 wasn’t a big deal. Well, we got the number. Trump raises three million in the first quarter, smashing Democrat numbers.

Now, let me put things in perspective. In the first quarter of 2019 Trump raised a self-reported $30 million for his reelection campaign, blazing past the fund-raising totals. Trump has raised more money than any of those 18 Democrats. And when this news hit, the Drive-Bys were once again blown out of the water. You remember in 2016 Hillary Clinton outspent Trump two to one. And let’s not forget how much Jeb Bush spent. Jeb Bush spent — folks, for some reason the figure a hundred million. Did they raise a hundred million or what — (interruption) a hundred million dollars. He got three delegates. Jeb got three delegates.

But look at this. Ninety-two percent solid negative fake news. Not just negative, but fake news for two years on Donald Trump, and people still see him as the only person who can stop the left and save this country. And they have an amazing ability to ignore the fake news. Thirty million. And you know the vast majority of it is from people giving $200 or less. The very deplorables Hillary Clinton cited as the problem in America.

But the deplorables are the people who make this country work, in my estimation. In addition to the $30 million raised by the campaign, the Republican National Committee has raised $46 million for their candidate in 2020. And according to the RNC chairwoman, Rona McDaniel, the campaign’s had eight seven-figure days in 2019 and 100,000 new donors since January.

Holy smokes. That means new energy. That means even more people being brought into the Trump, slash, Republican universe, and even at that there remain a bunch of lunkhead Republicans who are advising other Republicans to campaign without Trump, independent of Trump.

NBC News notes that Trump raised more in the first quarter than the top two Democrats combined, Crazy Bernie, $18 million, Kamala Harris, $12 million. CNN reports 99% of donations to the campaign are $200 or less, an average donation of $34.26. Let me tell you something, folks. In politics, money is everything. In professional politics. I’m talking about consultants, advisers, inside-the-Beltway people. Money is everything. Policy issues, they don’t count for anything. Money. Money is the determining, deciding factor.

The same people giving Trump grief for keeping his campaign promises. These are the people that design campaigns, what do you mean keep your promises? Everybody knows politicians lie. You’re not supposed to keep promises. You’re supposed to do what your consultants tell you to do. Trump is out keeping his promises. This is stunning! Average donation, $34.26. Ninety-nine percent of donations, $200 or less. And Trump has raised, just for his campaign, $10 million more than the two top Democrats combined, Crazy Bernie and Kamala Harris. 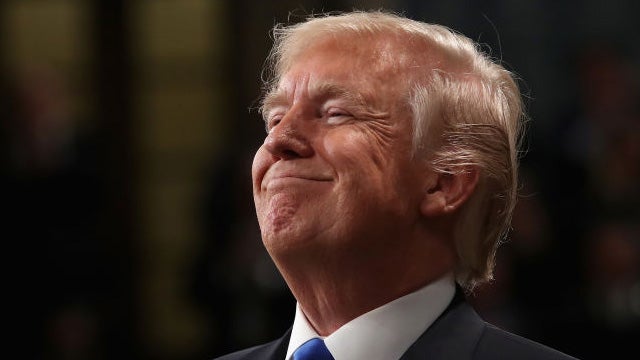 You see Morgan Stanley came out over the weekend and said “we don’t see –“ well, they didn’t quite say it this way. They see Trump’s reelection as likely. They’re advising their investors that Trump’s reelection is likely. They can’t find to say these guys and not be truthful about them. Too many people are investing money based on what people like Morgan Stanley, the giant investment bank, are saying. And here’s Jamie Dimon, the biggest bank in the world, largest economy just posted record quarterly results showing U.S. growth continuing to start the year.

But how long can it last? Well, according to JPMorgan Chase CEO Jamie Dimon, the expansion that began after the 2008 financial crisis has no expiration date. JPMorgan Chase reported profits, revenue Friday that exceeded expectations. And Jamie Dimon said if you look at the American economy, the consumer is in good shape, balance sheets are in good shape, people are going back to the workforce, companies have plenty of capital. That means money, for those of you in Rio Linda.

He said it could go on for years. There’s no law that says it has to stop. We do make lists and we look at all the other things, geopolitical issues, lower liquidity, there may be a confluence of events that somehow cause a recession, but it may not be in 2019, 2020, or 2021.