RUSH: Now, this… This is interesting too, and more on this in a few minutes. CNN is reporting that Nancy Pelosi says that socialism is “not the view” of the Democrat Party. Now, that’s not true. It is, whether she wants to admit it or not. But what this means is that I am certain she has seen some horrific polling. For her to go out there and say, “No, no, no, no! Socialism? That’s not the view of the Democrat Party.” 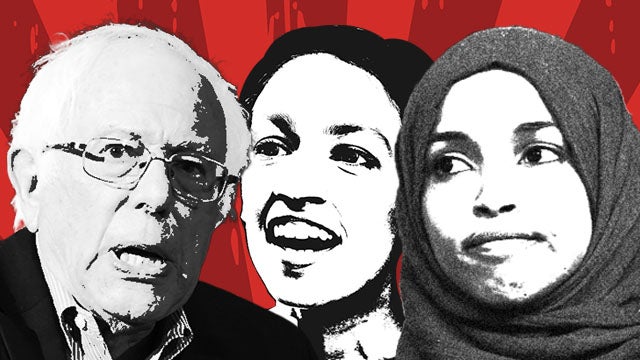 RUSH: Crazy Bernie and his followers filibustered a town hall on Fox News last night. President Trump is not happy that Fox News had Crazy Bernie on.

Up next, Christiane Amanpour says, “The president has tweeted against Congresswoman Ilhan Omar suggesting that some sort of linkage with this video of the twin towers and what she said about 9/11. Are you concerned for her well-being? Have you asked for more security –” Are you concerned for the well-being of Ilhan — my, gosh, this stuff just ticks —

PELOSI: Yes. I don’t think that the congresswoman is anti-Semitic. I wouldn’t even put those in the same category.

AMANPOUR: But she’s been being accused of it.

PELOSI: Well, she’s being accused of it, but I criticize the president for using film of 9 — video of 9/11 as a political tool. I think he was wrong to do that.

RUSH: Whoa, whoa, whoa, whoa! What’s wrong with that? What’s wrong with reminding? I thought we were, quote, unquote, to never forget. Every 9/11 we have ceremonies all day long on TV, somebody standing there reading the names of the people killed. Yeah, we’re not supposed to show that video, though, and the media has suppressed it, we’re not supposed to remind people what happened because we’re in the process of trying to erase what really happened on 9/11.

And then the next bite we have Christiane Amanpour, “As a longtime women’s activist, you support the Women’s Global Development and Prosperity Initiative, which the president introduced and which Ivanka Trump is campaigning for in Africa right now?”

PELOSI: I have no idea about any particulars of it. It’s not anything that we’ve been working on. We work on advancing women. If I ruled the world, and I ruled the world I would say educate women and girls. That’s the most progressive thing, the most transformative thing that you can do to advance everything: families, women, girls, the economies of countries, saving the environment, growing economies. It is the most important thing that you can do.

I don’t know how you can have much better evidence of the divide. Over half of Democrat women think women face a lot of discrimination. Thirty-five percent of men believe that, but only 12% Republican women, 9% Republican men. And Democrat men, I mean, they’re pretty tamed by now anyway, aren’t they? Yeah, have to say this. You’d have to say that they are. And so that might explain why Democrat men say 35%. Even that it’s not half of ’em.