RUSH: Norman Podhoretz is a brilliant conservative, formally liberal. I’ve had the pleasure and the honor of getting to know him over the years. He is a person that started out, he called himself an anti-anti-Trump supporter. Meaning he originally was a supporter of Trump by being against the people who were against Trump.

And people have talked him, he has explained his anger and his confusion over the Never Trumpers. And everybody’s said, “Norman, write that, put that down on paper.” He’s a great writer, a substantive thinker that is rare. And he’s probably the greatest living neocon, neoconservative, meaning former liberal, now conservative, ever since Irving Kristol passed away. 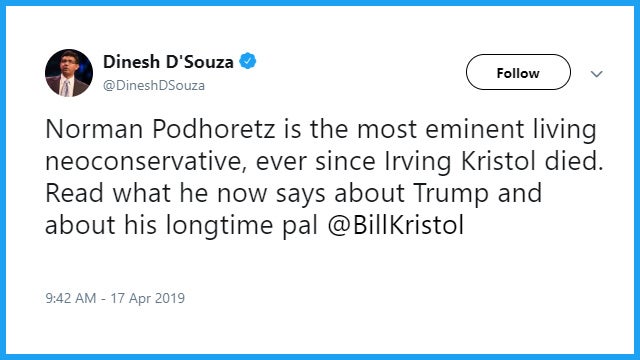 And he has jotted some of this down now. And Dinesh D’Souza copied and pasted some of it in his Twitter page. And it’s good, and I want to read it to you. It’s not going to take that long. And it’s actually Podhoretz answering some questions. “Yeah, I’m actually quite proud of that section of the book. It certainly convinced me. See, for a while I was supporting Marco Rubio, and I was enthusiastic about him as time went on, and I looked around me, however, and I began to be bothered by the hatred that was building up against Trump from my soon-to-be new set of ex-friends.”

He’s talking about these conservative intellectual Never Trumpers. He was aghast at the hatred that he was seeing from them and in the things they would say and the things that they would write. He said, “You could think that Trump was unfit for office. I can understand that. But my ex-friends’ revulsion was always accompanied by attacks on the people who supported him. They called these people dishonorable, they called ’em opportunists, they called Trump supporters cowards. And this was done by people like Bret Stephens, Wall Street Journal, and Bill Kristol and various others. And I took offense at that. So that inclined me to what I then became anti-anti-Trump. And by the time Trump finally won the nomination, I was sliding into a pro-Trump position which has grown stronger and more passionate as time has gone on.”

And talking about the Never Trumpers he said there’s snobbery in it and there’s genuine, you might say, aesthetic revulsion. “It’s more than disagreement about policy, because the fact of the matter is that they don’t have very many grounds for disagreement about policy,” which has always been my observation. The things that they have devoted their lives to, policy-wise, Trump is implementing for the most part. And they still hate it! They still resent it.

Look, I have my own reasons to explain the Never Trumpers, but here is a fellow intellectual of theirs now admitting that they are his former friends. He says, “I’ve known Bill Kristol all of his life, and I like him, but I have to say that I am shocked by him saying that if it comes to the deep state versus Trump, he’ll take the deep state? You know, I was raised to believe the last thing in the world you defend is your own. And I’m proud to have overcome that education. I think the first thing in the world you defend is your own, especially when it’s under siege, both from without and within.

“So the conservative elite has allowed its various features, its sense of superiority to overcome its intellectual powers. Let’s put it that way. I don’t know how else to explain it. The Never Trumper phenomenon is something that bugs a lot of people, and it has resulted in the breakup of a lot of really deep and long friendships at various conservative magazines and conservative think tanks.”

Now, you might be puzzled, what does this mean, I was raised to believe the last thing in the world you defend is your own? That’s a manners thing that you don’t focus on yourself. You defend and protect everything but your own so that you can show you’re not selfish and into it for yourself. But he’s had a total reversal. Like you don’t defend your own, who else will? And if your own and what you believe in is under attack, you have no reason to shy away from defending it. So that’s what he means by that.

But his observation, the conservative elite has allowed its sense of superiority to overcome its intellectual powers. That’s right on the money. Superiorist arrogance, condescension really aimed at Trump supporters as much, if not more, at Trump. But I think there’s jealousy. I think Trump coming along has proven the lack of need.

Wait a minute, you’re conservative. What is this “give me money” business? “Well, we’re so important, the conservative movement, that we need our funding in nontraditional ways.” Well, if your magazine can’t make a profit, then how valuable is it, really? “Well, uh, the value is not the magazine, but the intellectual prowess that puts it together,” blah, blah, blah, blah.

Here comes Trump, somebody they have no respect for, somebody they think is an absolute birthing idiot, and is not asking anybody for a dime and is implementing everything they believed in to cheers and applause that they will never hear for themselves, and they’re just jealous.

Trump is demonstrating that they’ve been running maybe a little bit of a scam. What good have they been in implementing conservatism and advancing it if a guy who’s never been in politics before can come in and get elected president in less than two years, implement 90% of what they devoted their lives to. So I think that’s a factor.

But as Mr. Podhoretz says, it’s really a class thing. The superiorist, nose in the air looking down at lessers and having those lessers outperform you and demonstrate your own irrelevance got to be infuriating. And now their magazines are going belly up, so they’re starting new websites, and they can’t get subscribers for that. So it’s doubly frustrating.