AP Claims Trump Made You Numb to Mueller Report

RUSH: A little article here from the AP last Friday. “After Two Years of Russia Probe Drips, Are You Numb to It All?” Now, from the headline, you would think that the AP might have actually stumbled into the truth here and they’re saying the public is sick of the endless allegations against Trump, that they are sick of the news being nothing but what a reprobate Trump is and he’s a Russian agent and all that. But that isn’t what this article says at all. 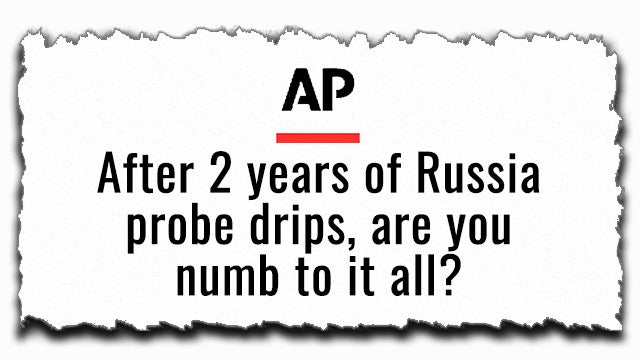 No way. No. The headline is very misleading. This story actually claims that it was Trump’s strategy to make you numb to the Mueller report. If Trump hadn’t done that, why, the Mueller report would have been far more shocking to you and you would be demanding that Trump resign or be impeached. But because Trump continually mocked Mueller and the investigation as a witch hunt — because Trump wouldn’t stop talking about it, in other words — Trump is who has made you tired of it all. (Snort!)

I tell you, the history revisionism here is striking. It isn’t Trump. Trump did nothing but react. Trump’s minding his own business and one day a coup is started to oust him. Trump is minding his own business trying to win the presidency, and a coup is begun to deny him the presidency. They tried to rig the election for Hillary Clinton. That failed. So the coup then becomes an effort to get Trump thrown out of office by way of driving his approval numbers down so low that he could not survive any impeachment and would have to resign.

To make all this happen, it was the media that was filled with these Trump stories of collusion and treachery and treason (as you well know) for two years. And all Trump ever did was react to it. Had there been no Mueller report, had there been no investigation, Trump wouldn’t have been calling anything a witch hunt. Everything that was done here was started by other people, and all Trump did was react to it. And he reacted to it from the standpoint of somebody who knew none of it was true. He reacted to it from the standpoint of knowing he didn’t do it.

Imagine being in his position. The entire intelligence apparatus of the United States of America, in cahoots with some in the FBI and from the CIA and the Obama administration are working in tandem with the media to destroy you by spreading lies. Not just any old lies, but that you are a traitor and that you are illegitimate — and in the process, trying to deny this man one of the single greatest achievements of his life. And he’s sitting there all this while knowing that none of these allegations are true.

What would you do? What would you do in those same circumstances? And I want you to think about Trump’s winning the presidency, by the way, folks. You know, I have some basis, I have a few things in common here enabling me to understand. Donald Trump did not get any help. Donald Trump did this on his own. He had the entire Democrat Party arrayed against him, and he also had much of the Republican Party arrayed against him during the primary process.

He had any number of official Republican organizations trying to do strange games with delegate allocation for the convention. Even after Trump won the nomination, many in his own party regretted it and abandoned him and signed on with Hillary or otherwise began to rip him apart. Many in his own party hoped that he lost or would lose. He didn’t get the push that you get from your typical political network.

But he had something even better. He had the support of the American people, a sizable majority of the American people. And this is another telltale thing that happened. All of these forces arrayed against Donald Trump could not persuade those Americans to abandon Trump. They proved more powerful in a presidential election than the Obama administration, intelligence apparatus, FBI leadership, the entirety of the mainstream media and the Democrat Party.

The achievement that Trump pulled off here — winning the presidency of the United States as an outsider — is one of the singular, great achievements of anybody’s life had they accomplished the same thing. And here are a bunch of people attempting not only to take it away and deny him the achievement, but also to downplay it and then claim that it was not legitimate, that it was the product of treason. Now, what would you do if this is you? 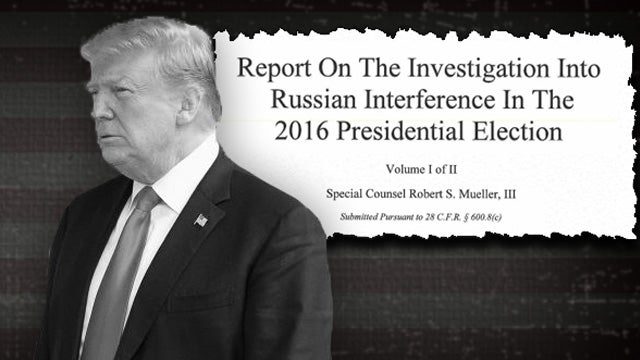 You’re just gonna sit there silent, act docile and respectful of the system while it sets out to destroy you? You know that Trump fights back against anybody that hits him. But that’s the key: Fights back. He’s a reactionary-type guy in this regard. He doesn’t get up every day deciding who to destroy. Who he destroys defines themselves by going after him, and that’s what this was. So here’s Trump reacting. Now the media wants to come along and claim that the reason the American people are dulled out by this, the reason they’re tired of it is because Trump wouldn’t let it go?

For 2-1/2 years, we had leaks four to five times a day in major media organizations. The reporting never ended. It was consistent every day of the week, every month of the year, and yet it’s Trump who has caused people to become “numb” to the Mueller report? What about the Clintons going after Ken Starr? Why was not that same lament made? “You know, people are immune to this because of Clinton. He just… (sigh) Clinton wouldn’t stop talking about Starr.” No. Nobody ever said that. No.

The media joined Clinton in attacking Starr, just as the media now is beginning to turn their sites on Barr as well as Trump because the dirty little secret is the coup continues. The coup is not over. The coup has just transferred. For two years, “Russians, Russians, Russians, Russians!” There weren’t any Russians. Now it’s, “Obstruction, obstruction, obstruction of justice,” and the media and the Democrats are gonna move full-speed ahead on the idea that they’re gonna impeach Trump, that he deserves to be impeached, that he obstructed justice.