Greenwald Stunned by Corporate Media Response to the Mueller Report

RUSH: So Glenn Greenwald, he is… Well, I don’t know that I need to shade this.  He’s an uber-leftist journalist who’s been chased out of the United States by media that don’t like him.  He now lives in San Juan, Sao Paulo, somewhere down in Brazil, and he started a website called The Intercept. 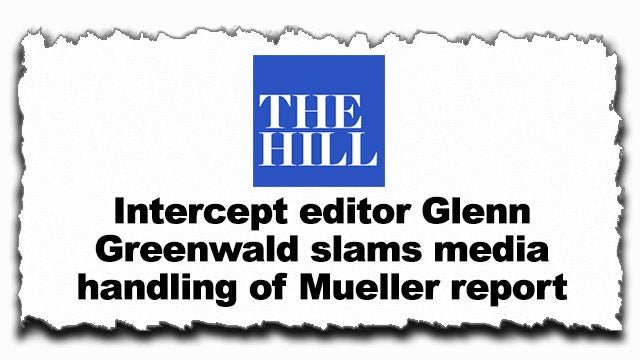 He was known before Snowden came along, but he became Snowden’s handpicked journalist of choice, and he followed Snowden all over.  Edward Snowden of the NSA who revealed all those secrets.  And it was after that period of time with Snowden that he started the website called The Intercept.  He is highly critical of the Drive-By Media, and not for political reasons, not ideological reasons.  He’s critical of them because he thinks that they’re not really journalists anymore and that they’re nothing more than actually slaves to the Democrats.

See, real journalists don’t want to be slaves to anybody.  They don’t want to be considered in the back pocket of anybody.  They want to be thought of as independent.  We don’t have real journalists anymore.  We’ve got Democrat Party hacks who are disguised as journalists, and they work at every network.  So Greenwald is pretty intense attacking them, and he’s done so yesterday on TheHill.com, their TV channel (I guess their video podcasts).  He said that corporate media reaction to the Mueller report is “genuinely stunning.”

He said, “I find that genuinely stunning as somebody who’s been a pretty harsh media critic for more than a decade. … The reality is that for three years there has been a conspiracy theory that has dominated our political and media discourse, which is that Donald Trump conspired with Russia over the 2016 election and that he’s an agent of the Russian government along with many of his associates. In the Mueller report, one section after the next said either they couldn’t establish that or there was no evidence for it, and yet they’re acting as though it said exactly the opposite, that this conspiracy theory was demonstrated and proven…” 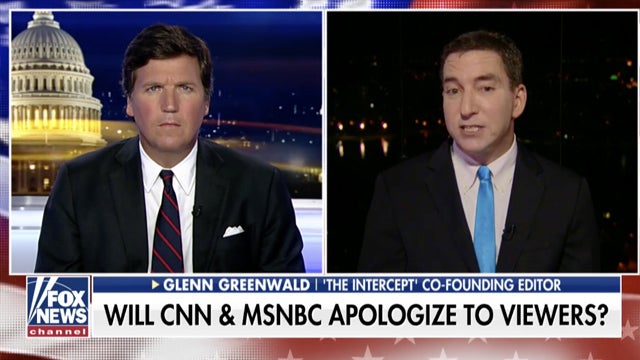 He said, he can’t believe it.  For 2-1/2 years, we’ve been told that Trump is a traitor, that he’s a Russian agent.  The Mueller report comes out and exonerates Trump and says, “No, he wasn’t,” and yet the media continues to report on Trump as though the Mueller report did say that Trump colluded with Russia and that Russia cheated and helped Trump win the 2016 election.  Glenn Greenwald said he’s flabbergasted.  But he has a theory.

Quote, the media “are living in some bizarre fantasy land because they’re worried that admitting that they got this story wrong will damage their credibility. Pretending they got it right is just worsening the problem.” So he thinks they know, and he’s talking about the Drive-By Media at large.  He thinks they know they got it wrong, but they don’t dare admit it because it would damage their credibility, and they don’t dare apologize for it. So instead, they pretend they got it right.

They continue to lie about the Mueller report like they lied about the investigation all the way through it, and they’re just worsening the problem.  Meaning that they are continuing to damage their reputation.  I disagree with him about this.  I don’t think they’re worried their credibility.  If they were worried about their credibility, this would have never happened!  Because, I’m telling you — for, what, the umpteenth millionth time? — everybody’s know from the get-go that there was no “there” there.  Everybody has known there was no collusion.

Now, we have to make allowances.  Some of these people… I will concede that many of them are not that bright and they are not that educated.  They live in a cocoon, and they don’t know much history.  It’s an amazing thing, but I think journalism education actually closes minds.  I don’t think it opens them. Whereas journalism used to require curiosity and it used to require suspicion and doubt, there isn’t any.  There is no curiosity whatsoever when it comes to the Democrat Party.  There’s no doubt. There’s no suspicion.

CNN’s sitting there watching their audience disappear.  They don’t care.  I can’t relate to that, just as somebody who’s in the business of broadcasting, which they are in, to sit there and watch…? A national cable news network that doesn’t even reach 400,000 viewers? That is such a failure.  I would be embarrassed to show up!  I’d be worried that I was gonna lose my job.  These people, they do not care, because their audience is everybody else in Washington.  You, they hold in contempt.  If they could change your minds, fine and dandy, but you are not their focus.