I Sound the Alarm Here Every Day — With Optimism

CALLER: One thing that we have to do is realize the danger we’re in. These people, the Democrats, they’re energized and they are funded. And we have a population that is absolutely divided. There are those of us who are Trump supporters, of which I’m one, and then you got the ones that would vote for Bernie or even Biden, forbid the thought.

And so on our side of the board, we can never assume that Trump is gonna win. We gotta treat this as a white knuckle fight right to the end. And we’re gonna have to go after the undecideds who are all over the board. And I’ve heard some of the original Trump voters say that they are becoming discouraged with Trump and won’t vote for him again in 2020. The thing is, they have to know that if we lose that White House and any one of these — and these are communists, all of them. They’re not Democrats. The Democrat Party by and large is dead.

What we have out there is a bunch of communists who want to take this country straight to Marxism. And if people want a country where you can’t buy meat, you can’t own a gun, you can’t have a car, you can’t travel as you would, this Green New Deal is a communist thing, if they don’t want this, we have got to be as firm as possible on the side of Donald Trump and make it a life-and-death battle.

RUSH: I don’t disagree with you. But are you suggesting that I am sounding too overconfident here and that I am not sounding enough of a call to alarms here about this?

CALLER: Perhaps, yeah, Rush. I mean, you sound — this is no time for overconfidence. We are in major, major peril, Rush. And this is a time to sound the alarm and get our forces marshaled and in step to vote for Trump, including the ones that have —

RUSH: Well, I understand you’re saying this. I don’t mean to be rude and interrupt, but I’ve got a limited amount of time before the segment ends. 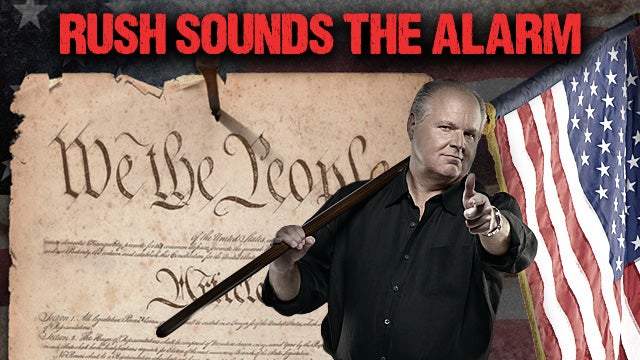 RUSH: I want to react to you. I spend every hour of this program sounding the alarm. When I go elsewhere, I make a concerted effort, even on this program, at all times, no matter how bad it is, I try to at least be optimistic in a realistic sense. Because being pessimistic isn’t gonna get anything done.

Now, calling people to alarm, you know, call to arms is much different than being pessimistic. Pessimistic is defeated. I don’t feel defeated. I don’t think it’s a fait accompli that we’re going to lose. If I did, I would be doing something else. And I do think that being positive and confident is a much better way to encourage people than depressing them.