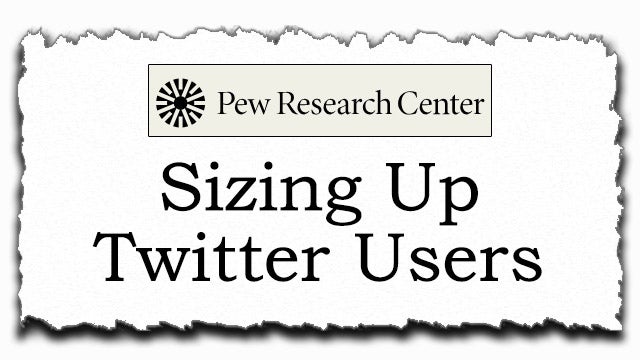 There’s a couple of stories on this, in fact. The Pew Research Center: “Sizing Up Twitter Users — U.S. adult Twitter users are younger and more likely to be Democrats than the general public. Most users rarely tweet, but the most prolific 10% create 80% of tweets from adult U.S. users.” You know what this…? This story actually confirms a bunch of things I have said or thought about Twitter over the many years. Let me pull some stats from this.

This is a really long article, and it basically repeats that stat over and over in this story to illustrate it. It uses it in different ways, but the stat gets repeated. The 22% of “U.S. adult Twitter users are younger and more likely to be Democrats than the general public. Most [people on Twitter] rarely tweet, but the most prolific 10% create 80% of tweets from adult U.S. users.” This is the stat that really confirms my thoughts about this. Journalists are lazy (we know this), and one of the worst things that’s happened to journalism…

It’s hard to nail down just one, but one of the worst is Twitter.

Because for journalists Twitter has become a stand-in for the opinion of the general public. You know, journalism has these phony concepts that (impression), “You gotta present both sides. Uh, you — you — you have to present a narrative.” So Twitter has become the go-to place to present supposed public opinion that backs up the wacko premise of any journalist’s story. But nobody knows who Twitter users are. So people who are anonymous, maybe using fake names — and some people use their real names, of course. But who cares?

How many times do you see a story reported followed by “and Twitter blew up” or “the internet blew up”? So what? Do you think if talk radio blew up over a story that the Drive-By Media would say, “And talk radio blew up today over…”? No way! Because Twitter, they know that it’s their people on it. They know it’s fellow leftists and progressives. Twitter has become almost the sole proprietorship of left-wing hackery and activism, and this is why I have no use for it. There are other reasons I have no use for it as well, but it’s become a tool that nobody can object to.

Because it’s supposedly the opinion of the great unwashed, public opinion, the American people. So journalists have this built-in way to use what they claim is on Twitter as evidence for what America as a whole happens to think, and it doesn’t represent America as a whole. It’s 80% leftist and Democrat populated — and 80%, therefore, leftist and Democrat utilized. “[N]early two-thirds (63%) of Twitter users ages 18 to 49 identify as Democrats or lean toward the Democratic Party…

“Members of the top 10% of tweeters also have distinct attitudes, behaviors and personal characteristics compared with those who use the platform less often. These prolific tweeters are more likely to be women: 65% are, compared with 48% of the bottom 90% of tweeters. And these most active tweeters are much more likely than others to say they post about political issues.” So 22% of American adults use Twitter, and yet Twitter is used by the Drive-By Media as a backup or as a confirmation of public opinion on an issue.

Who cares whether Twitter “blew up”? They never say talk radio blew up. They never do anything but impugn and condemn whatever the reaction is to anything on talk radio. That’s why conservatives instinctively know they’re getting a raw deal on Twitter, know they’re being shadow banned, they’re being disconnected. Their tweets are not being posted even though it’s made to look like they are. You know the drill on this.