RUSH: This is Metro U.K., the U.K. news website. “Protester Glues Her Breasts to Ground Outside Goldman Sachs.” This babe is all-in, wouldn’t you say? The rest of you protesters are just bystanders. This babe is committed. She has glued her boobs to the sidewalk. “A woman has glued her breasts to the road outside the Goldman Sachs offices today as activists ramp up disruption on the final day of protests. 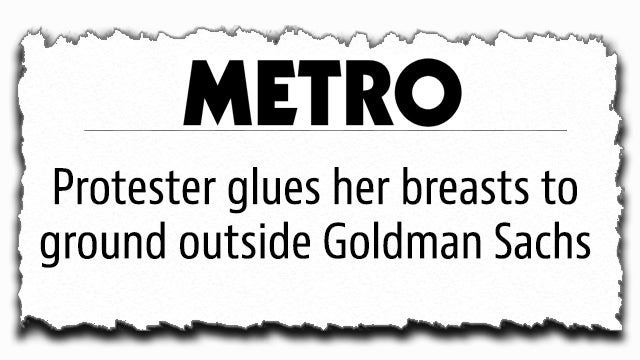 “The eco-protester was spotted by passengers on a bus lying face down with her top up to her neck. Several police officers surrounded the woman,” I’ll bet they did, “and put up screens to stop the public watching her one-woman [two-breast] protest. It was quite possibly the most spectacular stunt yet as climate change activists targeted London’s financial districts to highlight what they call the business world’s ‘role in our collective suicide.'”

She was surrounded by cops, the eco-protestor, and spotted by passengers on a bus. Extinction Rebellion was the name of the group. “Extinction Rebellion demonstrators temporarily blockaded the London Stock Exchange by gluing themselves across entrances to the trading hub in the City of London early on Thursday morning.” This babe goes all-in and glued her breasts to the story.