Was it yesterday? I guess it was yesterday. (interruption) It was yesterday. Now, the reason he did that was to meet with the Reverend Sharpton. Now, I have a different take on this. The Drive-By Media look at it as, “This is Mayor Pete. This is really smart on Mayor Pete’s part. He’s going up to Harlem and he’s talking to the Reverend Sharpton about black people, and he’s trying to get knowledge on the background of black people. He’s trying to learn about black people, even after firing a black police chief in South Bend.”

For some reason, it is really important that Mayor Pete… This is the news. It is really important that Mayor Pete took the train up there — took the number 3 train, Mr. Snerdley — rather than being driven up in a limo or in an Uber. The fact that… (interruption) Yeah, the fact that he took the train up there means that Mayor Pete was serious about going to Harlem. I mean, on the train you’re stuck there with real people. You can’t tell the driver to stop and turn around if you don’t like something that you see. You gotta go. 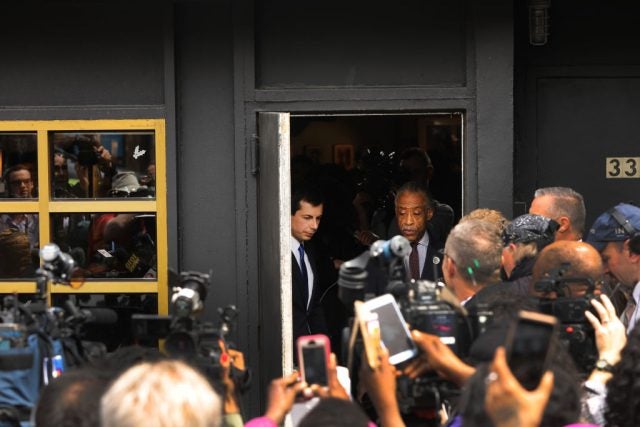 You gotta go to where the train takes you, and you gotta take the train back. So, anyway, he’s sitting up there. The last time something like this happened was Caroline Kennedy went up to kiss the ring and get the blessing of Al Sharpton and made the big, fatal mistake of being photographed eating. One thing a politician is never supposed to do is you’re never supposed to allow cameras when you’re actually eating. You can sit in front of your plate. You can be toying around with the food or whatever it is on the plate with your knife and fork.

But you are never supposed to open your mouth, put the food in it, and start chewing while the cameras are running because nobody looks good doing that. And, boy, she didn’t. She chewed with her mouth open. You can imagine the smacking lips sound that were accompanying this. Meanwhile, the Reverend Sharpton was just looking at her. He was not eating anything. Well, yesterday, in the pictures of Mayor Pete, the media’s all gathered outside the windows looking right into the table where Sharpton and Mayor Pete are eating.

Mayor Pete has a piece of fried chicken in his hands, but you do not see him putting it in his mouth in any of the photos I’ve seen. It’s very wise. The story was that he asked the Reverend Sharpton if (chuckles) it was proper and permissible and okay, whatever, to eat fried chicken at Sylvia’s with your hands. This is considered great sensitivity. The media is applauding Mayor Pete for great sensitivity. You let any Republican ask that.

You know, what if a Republican went up there to meet Reverend Sharpton? What would the story be? “Republican visits Al Sharpton petting zoo to learn about the people that live in the zoo.” That’s what they would do. They would lampoon it. They would accuse the Republican of being phony, and they would say, “They don’t really care. They’re just going up there to pander, ’cause they really don’t like black people,” and so forth. Mayor Pete goes up there and whatever he does is applauded and Sharpton says, “Yeah, I’m thinking…” 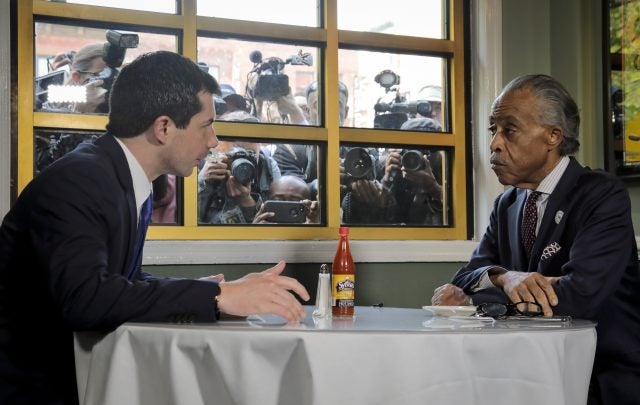 I’ve got a story here about The Oprah, who… She doesn’t know his last name. She calls him Buggapoop, Boogaboota, Bootapoop or something. Bootaboob. Not boop. Bootaboob. Bootaboob. She says he’s intriguing her somehow. Anyway, he’s fallen off the polling table! I mean, with Biden there at either 36 or 39%, Crazy Bernie at 22 and 15%, where is Mayor Pete? This is how fickle this all is. Just middle of last week, Mayor Pete was the big, silent gun that might come roaring out of nowhere and take over everything.

RUSH: My friends, I erred. There was a photo of Mayor Pete actually putting Sylvia’s fried chicken in his mouth. Now, I was under the impression that the Drive-Bys had not published it — and they hadn’t. There are no wire service photos of Mayor Pete actually eating with Al Sharpton. But there was an ABC video that we’ve accessed and taken a still shot from and put it up there on the Dittocam (flicks switch), and there it is.

I have to correct this, that I said that Mayor Pete was smart, that he did not actually put any of the fried chicken in his mouth. But, as you can see there on the Dittocam, he did. Look at that collection! Look at that mob outside those windows. You think this is not a setup? Here’s Al Sharpton with Mayor Pete there. They choose a window where the photographers can literally get 12 inches away to get their photos. 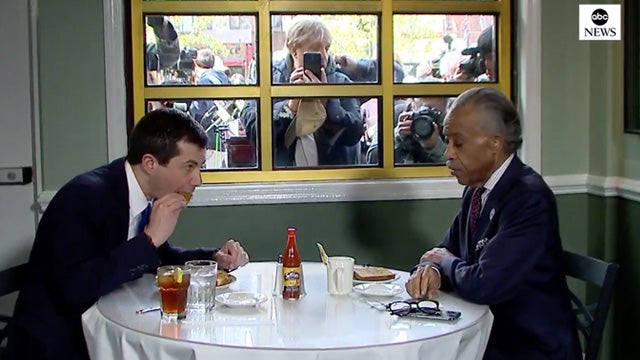 This is the luncheon where Mayor Pete asked the Reverend Sharpton if it was okay to eat fried chicken with your fingers while in Harlem. What, like Mayor Pete is going to the zoo trying to find out how the natives live in this place? What is this? (sigh) The pandering that goes on is just… Anyway, I had to correct that because I was wrong. I thought they shielded Mayor Pete, but they didn’t. Well, no wire service still frames have been published, but that’s a still shot from an ABC video.