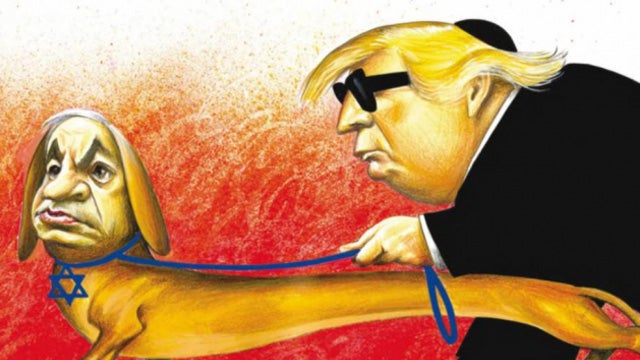 We already know the New York Times is obviously populated by a bunch of anti-Semites that are setting records for anti-Semitism in the Drive-By Media. And I think all of this anti-Semitism is directed at Netanyahu and his dominance in Israeli politics. To them, he’s an extreme right-winger, and that justifies the hate and it’s easy to take the hate even beyond politics, and now it’s how they get their anti-Semitism in, as I pointed out yesterday.

They profess a profound disagreement with Netanyahu and Israel, and it allows them then to do anti-Semitism in their cartoons and elsewhere. Now, the New York Times is owned and operated by a prominent Jewish family and has been for decades. And it has always been, to outsiders looking in, it’s a very curious thing.

The New York Times is so anti-Israel, and it has been for the longest time, and anti-Israel is a cover for their anti-Semitism. And it’s odd when you consider that Jewish people donate over half the money to the Democrat Party at large, and yet all of this media anti-Semitism is occurring at the same time as that financial support comes in. It’s difficult to understand.

Anyway, this tweet has nothing to do with anti-Semitism. It has to do with Alexandria Ocasio-Cortez. You ready for this? “The men at Fox News have a sickly obsession with AOC, partly because they resent her cleverness, charisma and moral vitality, but mostly because they suspect that in high school she was one of those girls they had no hope of getting a date with.” 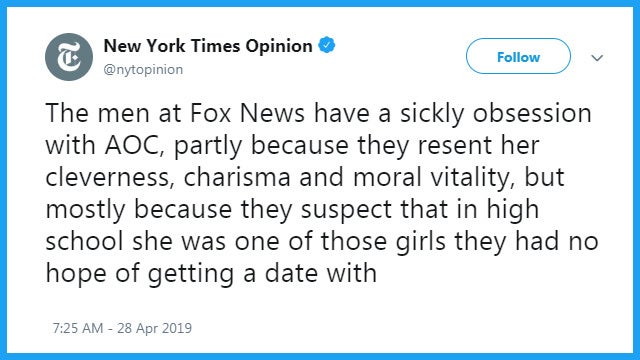 Do you believe that? I mean, that is a tweet from the New York Times editorial board! For crying out loud, you talk about high school? Who is obsessed with high school? You know, everybody is haunted by some or all of their high school years, and obviously whoever wrote this tweet clearly has not gotten over it.

“The men at Fox News have a sickly obsession with AOC, partly because … they suspect that in high school she was one of those girls they had no hope of getting a date with.” Would you believe somebody actually thinks that the guys that work at Fox News are looking at her and thinking, “You know, man, she’s the kind of babe in high school I could never get a date with; I don’t like her”? Who thinks this way? By the way, let me just take a little informal survey. Mr. Snerdley, when you look at Alexandria Ocasio-Cortez, do you think dating at all?

Do you…? Do you think physical? 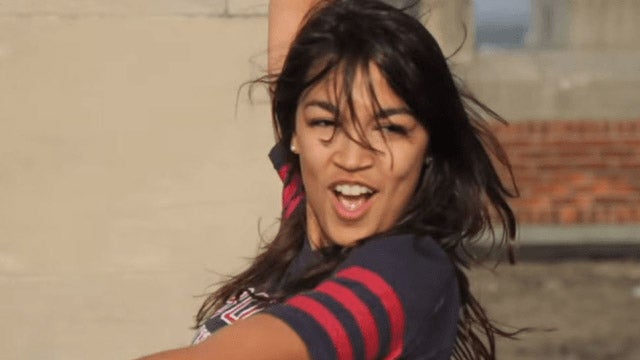 It’s not even a question of being hot or not hot. To me, I look at her, and that doesn’t even cross my mind. I mean, seeing her as a…

Yeah, she’s a kid, a child, a liberal child that doesn’t have much of a developed brain yet. The idea of dating that? I mean, it’s never… It’s never wafted across my fertile, deep, dark crevices of gray matter. But I wanted to share this with you, because if I get buried here in The Stack, I might be overwhelmed by other things.