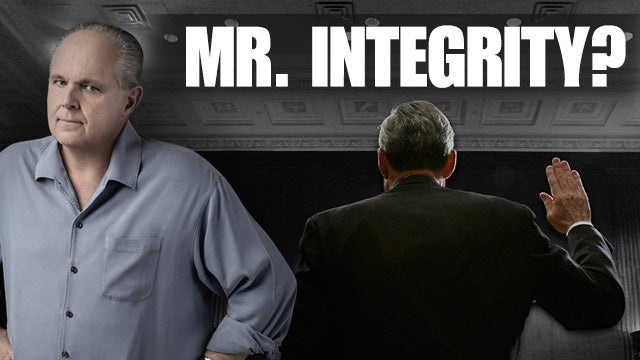 A lie was constructed by Hillary Clinton and the Democrat Party that the Russians colluded with the campaign, and this explains why Hillary didn’t win. It was a lie from top to bottom. They created a phony dossier to support the lie. It all goes to the top of the Obama administration and the Hillary Clinton campaign. Now, it seems to me that this was a poisonous tree from the beginning. Everything about this has been a lie. As such, it is going to fall apart at some point, and I think that’s what we are watching.

Unless you want to say, “It’s legitimate that Democrats should win every election, and when they don’t, that there’s some kind of a scandal,” which does happen to be their point of view. From the very beginning of this thing, it was phony. It was constructed and built on lies, and everything that has come — everything that’s happened, everything that has taken place because of this in the past three years — has become poisoned, has become corrupted.

They know they’ve got a bomb on their hands, and they so far haven’t been able to take it out on Mueller. So they take it out on Barr and anybody else they can. As Barr said yesterday, this whole thing is a “snitty” joke. That’s how he described Mueller’s letter: “snitty.” What a great word. It’s a takeoff on the word snooty. Snooty means fake, elite, phony, arrogance and so forth, undeserved arrogance. Mueller’s letter was “snitty.” The Mueller report was a “snitty” joke.

We’ve got Jerome Corsi, for crying out loud! We’ve got Roger Stone, for crying out loud! All of whom have been damaged to one degree or another only because of this investigation. This investigation didn’t find any crimes; it created them. The only crimes to be found in this whole process are the crimes that were created by the investigation. I think everybody ought to be pardoned. I think everybody in jail ought to have their sentences commuted and be pardoned.

They should be given full restitution, because everything that happened to these people was the result of a gigantic poisonous tree, and it is outrageous. This is what Barr is going to get to the bottom of and it’s why there is panic ongoing today about this. But when I stop and think about this, as I have mentioned to you so many times, it’s so disgusting. I’ve run out of ways to describe how angry, how outrageous, how disgusted I am over this and how close these people came to literally destroying the rule of law and the Constitution in this country.

Bob Prince, the old play-by-play guy for the Pittsburgh Pirates, had a description of a close play: “He was out by a gnat’s eyelash.” Well, that’s how close this was. This was so… I’ve never seen anything like this, and it continues.