RUSH: Right now, we have a 13-year-old avid fan and reader of the Rush Revere time-travel adventures in American history book series, of course, written by me. This is Vivian. She is from Central, Michigan, 13 years old, and it’s really great to have you on the program today, Vivian. How are you?

RUSH: I couldn’t be better. Could not be better since you called.

CALLER: (giggles) Thanks. I have a question about Rush Revere. If Rush Revere actually went back in time and actually helped out with, like, the Midnight Ride with Paul Revere and met George Washington and helped out with the tea party thing, why wasn’t he written down as one of American history’s heroes?

RUSH: Why wasn’t Rush Revere written about as a great hero in American history?

RUSH: (chuckles) What a great question. Well, because Rush Revere is a fictional character based on me.

RUSH: Oh, why didn’t the…? Because they were sworn to secrecy.

RUSH: They were sworn —

RUSH: Also, there’s something else. It comes up in the first book, in Rush Revere and the Brave Pilgrims. Revere made it a point — and we had it as a philosophy writing the books. These people could not actually do anything to change history.

CALLER: Ohhhh. (giggles) Now I get it.

RUSH: They could not be recorded as ever having been there.

CALLER: Okay. I get that now. Thank you.

RUSH: This is one of the standard-operating truths of time travel: If he ever do it, you can’t change what happens. If you could time travel, if you could go back to when you were 10… Something happened that you didn’t like. So you’d go back to when you were 10 and change it? You couldn’t do that. If you did that, you would upset things. You would change everything that happened from that day forward, anybody that had anything to do with you. You couldn’t do it. So authors like me who engage in the time-travel device understand that our characters that time travel cannot have anything to do with altering or changing the events, nor can their time there ever be acknowledged.

RUSH: It’s just a device that we come up with, rather than write dull books about history with events and dates. Rush Revere and Liberty and the gang from the school are a way of taking you, the reader, back to events as though you are living them as a way of learning them rather than just having the stuff recited to you as statistics and facts in the book. 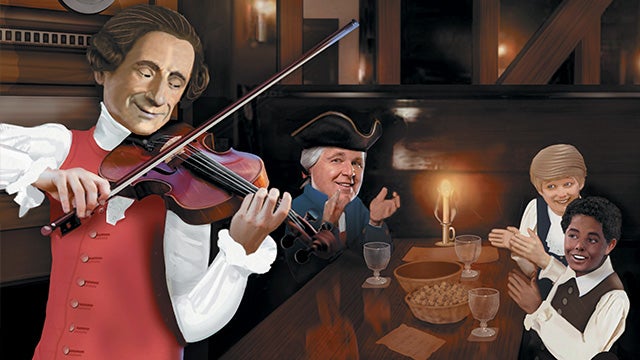 I would say, Vivian, your question indicates that it worked because you’re really into this. “They went back there; so why aren’t they written about in history books?” That’s such a great question. I’m glad you called. We’ll send you some special stuff from Liberty and the Revere people if you’ll hang on so we can get your address.