RUSH: Do you remember, ladies and gentlemen — switching gears here — during the McCain presidential campaign, Bill Cunningham introduced McCain, and in the process… He’s in Cincinnati, and he announced the name of Obama in full. “Barack Hussein Obama,” and McCain had a cow. “How dare you insult the man by calling him by his name! You’re finished, Cunningham. You’re never opening for me ever again.”

So McCain started lecturing people on how, “Not on his watch would a nice guy in the U.S. Senate named Barack Hussein Obama be denigrated because of his name or wherever he was from or what his ancestry was.” Contrast that with this. This is in Nashua, New Hampshire, yesterday during a campaign event. Vice President Bite Me taking questions from the audience. Here’s a woman giving Biden advice about Trump.

WOMAN: He won the election by 70,000 votes in Pennsylvania, Wisconsin, and Michigan. He won it because he had help by the Russians. He’s failing in carrying out the most basic function: To uphold the Constitution. He is not defending our national security. He has no interest in doing it. I don’t want to live in a country run by Vladimir Putin. I don’t understand why millions of people don’t get that message, and I think every candidate needs to pound that message home again and again and again. He’s an illegitimate president in my mind.

RUSH: So here’s this woman telling Biden, “I think he’s an illegitimate president and that’s…” He gets a bunch of cheers, and here’s what Bite Me said.

BIDEN: Would you be my vice president candidate? 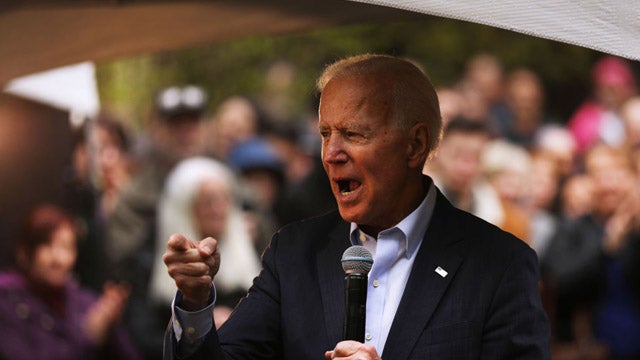 BIDEN: Folks, look. I absolutely agree You’re absolutely right, and now they have an investigation of the investigators who are investigating whether or not Vladimir Putin and the Russians engaged in trying to affect our election. Give me a break. Gosh almighty.

There was an attempt to lie to the American people using the media with the FBI, the CIA, the DOJ to convince people Trump was a traitor — and here you are agreeing with her, asking her to be your vice president? People are out there saying, “Rush, Biden proves it. The Democrat Party’s not that far left.” BS, they’re not that far left! The Democrat Party is as far left as I have ever seen them, and I don’t care who it is that ends up being their standard-bearer. But if it’s this guy…