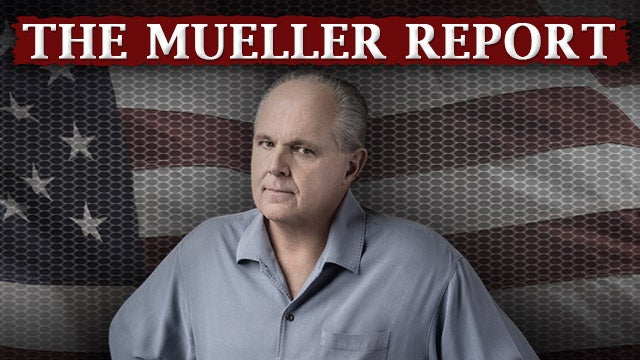 Did the Democrats ever stop to think of that? I mean, in the popular vote, Hillary Clinton wins by three million votes, and the Russians tampered. So what do we conclude from that? Democrats are trying for a do-over, and the White House counsel has told them to stuff it. (summarized) “You had 2-1/2 with this investigation, almost two years with the Mueller report. You don’t get to do it again. We’re not gonna play.” With that and the abortion bill in Alabama now sweeping into Missouri, Democrats are on the defensive, folks.

RUSH: Grab sound bite 23 very quickly. This is Democrat Mary Gay Scanlon, Pennsylvania, reading from the Mueller report today as part of the Democrats’ 12-hour reading (chuckles) of the Mueller report. This is all that ever need be published. This is… Mueller didn’t need to publish anything besides this. We didn’t need to 488 pages of slander and innuendo. We didn’t need… We’ve also found out, by the way, that Mueller didn’t even do the hiring of his team, that it was Andrew Weissmann, who was Hillary’s number one ally on the Mueller team, donor.

Weissmann was at Hillary’s victory (ahem) party, and joined her in tears that night. This guy should have been nowhere near this! Andrew Weissmann, just based on his previous experiences in the Enron task force, should have been nowhere near any investigation of Donald Trump. He’s a Hillary Clinton donor, fundraiser, and partisan, and he’s the one that hired the investigators! Mueller was, I guess, a figurehead for most of this. At any rate, this is the only thing from the Mueller report that matters… 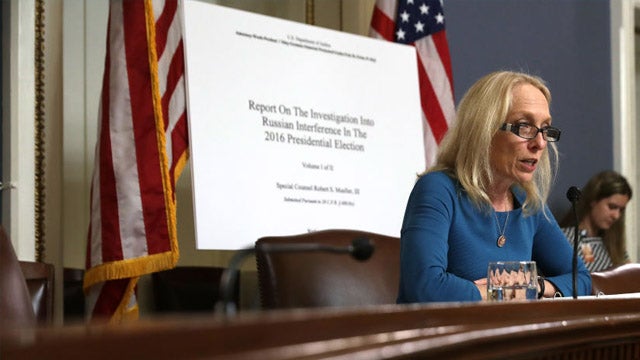 SCANLON: “The investigation did not establish that the Trump campaign coordinated with the Russian government in its election interference activities.”

RUSH: When it came time for Jerry Nadler to read (laughing) his portion of the Mueller report (laughing), do you know what he read? Do we have the sound bite? (interruption) We do. Yeah, sound bite number 24. Go ahead. This is Nadler. It’s his turn on it read the Mueller report. This is what he chose to read…

RUSH: Ha-ha-ha! Chairman Nadler chose to read the redacted portion, no doubt to make the point that the Mueller report is incomplete. (sigh)