RUSH: There’s a story in the Washington Times today, headline: “Green New Deal, Medicare for All Fail to Win Democrat Support.” What have they got? They’ve got the Green New Deal that they’re pushing. 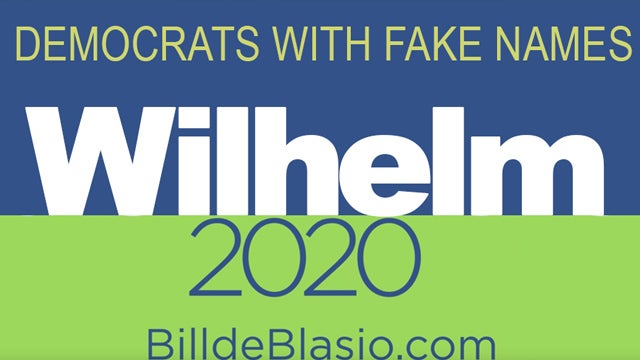 And now (chuckles) Jay Inslee, the governor of Washington, has entered the race and is making that his signature issue. Bill de Blasio… Do you know what his real name is, Mr. Snerdley? It’s Warren Wilhelm is Bill de Blasio’s real name. Look at all the Democrats with fake names. Gary Hart was Gary Hartpence. William Jefferson Blythe (Clinton). Barack Hussein Obama, and there’s a number of Democrats out there who change their names, alter their names, fake names. This guy’s name is Warren Wilhelm.

He’s like the 23rd Democrat to get in the race and they’re laughing about him throughout the city of New York where he is the most inconsequential — not inconsequential. He’s the most incompetent mayor anybody can ever remember. So they’re pushing the Green New Deal, Medicare for all, impeachment, raising the minimum wage. They’re languishing on the Democrat side of the House. There’s little support for any of these things among the Democrat caucus. There isn’t anything approaching unity other than on the concept of somehow trying to get rid of Trump.

And a lot of this is driven by a defensive mind-set where they think they’ve gotta do what their madcap base wants done or they are in big trouble. But, man, it is a… Actually, it’s a beautiful thing to watch the Democrats deteriorate this way and not know that it’s happening to them.