RUSH: The ongoing trade negotiations with the ChiComs continues to be as crucial as I have been portraying it here for the past couple of weeks. I just want to give you another example of the things that the president of the United States is up against here. Some people are reporting that the talks have hit a snag, that the ChiComs are trying to back out of previous elements of the deal that they’ve agreed to — which they always do.

This is about a woman named Susan Thornton, Mrs. Susan Thornton, the former assistant acting secretary of state in the Trump administration. She is advising the ChiCom leadership to suspend negotiations with Trump and just wait until he is defeated in 2020. This is an American citizen who used to work in the Trump administration who is advocating for the ChiComs to prevail simply because she doesn’t want Donald Trump to. No matter what the outcome might be! If the outcome is beneficial for China, fine and dandy.

As long as it’s not Trump. 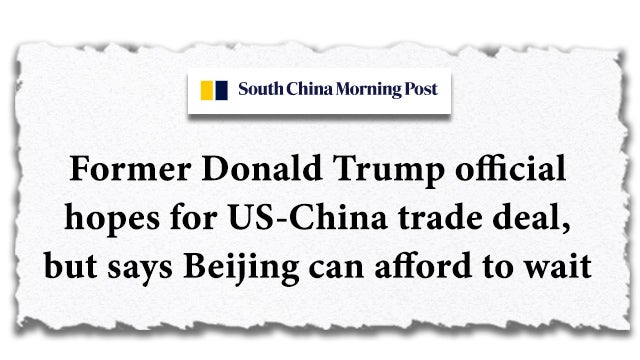 From the South China Morning Press: “‘I want to be optimistic,’ said Thornton, whose 27-year career in Washington ended in July. ‘I tell all our foreign counterparts they should keep steady, keep their heads down and wait. (They should) try to not let anything change dramatically. If this skeptical attitude towards talking diplomacy continues in this administration, you might have to wait till another administration,’ Thornton said at an event held by National Committee of U.S.-China relations and Shanghai’s American Chamber. …

“Thornton, hand-picked by former secretary of state Rex Tillerson as the senior diplomat dealing with China and North Korea, said she thought China could weather the trade war better than the Trump administration.” So it’s another example of the challenges that are faced by Trump as he attempts to put his agenda to Make America Great Again — in this case, negotiating from a position of strength of the U.S. economy for the United States, for the balance of trade for the world, being undermined by bureaucrats — being undermined by former members of his own administration over in the State Department. 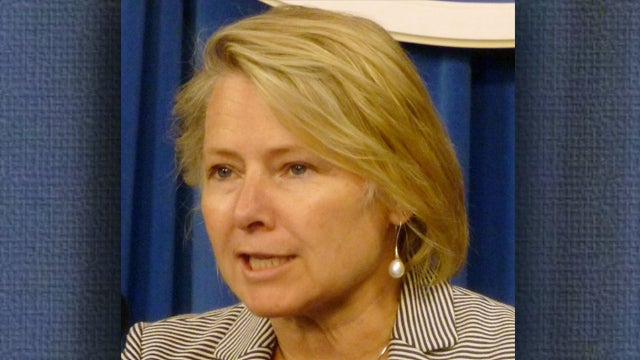 People might say, “Well, why would somebody do that? Why would somebody from the Trump administration or any administration advise the ChiComs or any other enemy to wait out the president?” Folks, this is not uncommon. I just want to very quickly remind you that back during the Reagan administration prior to Reagan’s reelection run in 1984, Ted Kennedy sent a letter to the current head honcho of the Soviet Union advising them (summarized), “Go easy! Go easy! Don’t worry. We’re gonna get rid of Reagan in 1984.

“Just bide your time, and everything will be okay,” the presumption being that the United States is not behaving normally when a Republican is in the White House, that the United States’ role in the world is not normal when a Republican’s in the White House, and if you just wait it out… What business did Ted Kennedy have? At the time, the Soviet Union was a declared enemy — not a perceived enemy, a declared enemy — and a declared nuclear threat.

And now you have this woman, Susan Thornton, former acting assistant secretary of state in the Trump administration hired by Rex Tillerson telling an audience in Beijing to stop negotiating right now; wait ’til Trump is removed from office in 2020. Why would she do it? My guess is she’s being paid. My guess is this… People that work for the government don’t make a lot of money compared to what they can make in the private sector.

So they do their time in the government, they build up their resumes, and then they hire themselves out as consultants with access to the ongoing United States government. This is where they score. This is where their educations… I mean, you get people coming out of the Ivy League who are making $150,000 or $200,000 a year. That’s nothing to sneeze at, but in the private sector they’d be doing 10 times that.

So they spend their time in government building the resume, making contacts, having access and playing a role in American policy. That makes ’em very valuable when they leave, because when they leave they still have contacts inside. They still have the ability to reach people, and they are valuable as consultants. It has to be a factor here, and then you probably can conclude this woman’s a Never Trumper, doesn’t like Trump or doesn’t like the United States in Trump’s image, doesn’t want Trump to prevail.

So she’s telling a Beijing audience (summarized), “Just continue to thwart Trump. Trump’s not gonna be reelected in 2020, and then you’ll be able to negotiate whatever deal you want.” Meaning: “If Trump loses in 2020 you can go back to having the advantage in U.S.-China trade relations.” We’ve got an American advocating this. It’s just another example of what Trump is up against, another example of the kind of efforts that are ongoing every day to undermine the agenda of Donald Trump, which is Make America Great Again — and what is that agenda? 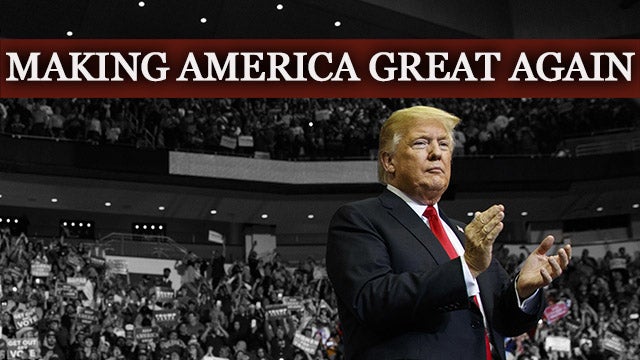 What does “Make America Great Again” mean? It means changing America’s place in this so-called world order, where we acknowledge that we are a superpower, but we apologize for it. We feel guilty about it. You might think this is the wrong way to portray it, and it may not be the precise explanation for why we assume this position. But it’s the most easily communicable to me (or communicative to you), ’cause it doesn’t make any sense.

Why would we achieve and become the world’s greatest superpower with the knowledge that we’re the good guys, and at the same time want to diminish our own role and allow ourselves to be pickpocketed and whatever else? And the answer resides in ideology. The answer resides in liberalism, the belief the United States is flawed and doesn’t deserve this superpower status. A belief that we threaten the world, a belief that we need to show the world we don’t intend to mean them any harm.

We’re not gonna colonize them, we’re not gonna steal their oil or minerals or natural gas, and we’re not gonna drop bombs on them or any of that. So we’ve gotta go overboard in showing them that we are not aggressive in any way. But it’s all rooted in a belief that there is not justice in the United States being the lone superpower of the world. So Trump comes along and says this doesn’t make any sense. This country was founded on basic principles that led to the creation and the evolution of the greatest country on the face of the earth for the people who live in it.

It is the people who make the country work. It’s a country of and by and for the people. It is because of its unique structure, its unique founding that it became greatest place on earth for humanity — and it still is. And we feed the world. We rescue the world, in addition to providing the picture, the beacon, the freedom, the light of liberty and freedom, which is, of course, relevant and highly important. To have people come along and not believe in that? So Trump says Make America Great Again means we’re simply gonna reassert that.

We’re gonna put our interests first. We’re not gonna subordinate our interests to other people. We’re gonna put them first, in the belief that doing so helps everybody because we’re the good guys, and we are inspirational. And there are people that oppose this, want no part of this for any number of reasons — some of them really, really dangerous. So now yet another example of somebody advising an opponent, in this case the ChiComs (some might say an enemy), “Just, you know, wait out this current mistake of a president.

“And then when he’s gone, we can get back to the way things were. We can get back the way things were, get back to the way the world is supposed to be, back to the normalcy that existed before this guy got elected.” In fact, there’s a story in the Stack today that dovetails with this. Angela Merkel. Ready for this? “German chancellor Angela Merkel says she thinks the post-World War II global order as we know it is over.” So here is a reference to that “order,” but she thinks it’s over for a different reason.

She is calling for Europe to stand up to China, Russia, and the U.S. Angela Merkel said, “There’s no doubt that Europe needs to reposition itself in a changed world. The old certainties of the postwar order no longer apply.” Well, she’s acknowledging the shakeup brought about to this world order by Donald Trump. But her solution to it is for Europe to stand up in opposition to what she thinks is the new alliance: China, Russia, and in the United States. What in the hell has happened to this woman?

Less than three years ago, Germany was one of the United States’ closest allies. Merkel was working harmoniously with Barack Hussein O. Trump, however, in this story… This story, by the way, is from… BuzzFeed? Doesn’t matter what. It’s a German magazine that’s been reprinted. “President Donald Trump, however, frequently insulted Merkel over the 2015 refugee crisis and has clashed with her on multiple occasions over NATO’s budget and the U.S.’s trade deficit with Germany.” 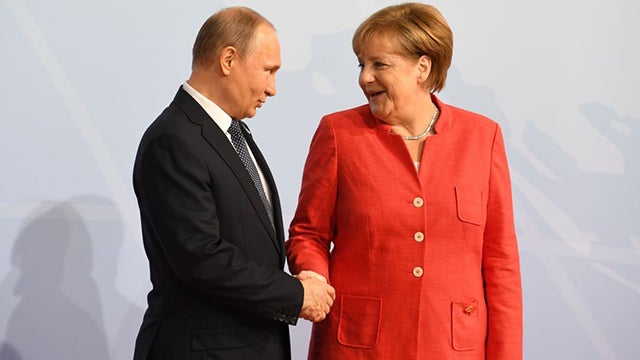 This is another example of Trump coming in and shaking things up, how it was out of balance to the detriment of the United States and it didn’t make any sense. Why in the world is Angela Merkel — a NATO member, short-changing NATO on dues on its participation in its own defense. Why is Angela Merkel making natural gas deals with Vladimir Putin at the expense of her own allies in NATO? And Trump calls her out on this. Trump called her out on opening her borders to massive illegal immigration from the Middle East.

Simply calling her out, disagreeing with her, pointing out mistakes, has shaken her up to the point we can’t… See, the United States never used to criticize anybody, really, because we didn’t want to upset them. We didn’t want to laud things over them. We didn’t want to act like the big guys. So if Germany, if Angela Merkel wanted to screw up her country by opening the borders and bringing in 800,000 radicals every year, then we said, “Fine.”

Even though doing this threatened the entire European continent and NATO, Barack Obama stood aside and said, “Fine,” under the belief that we have no business telling anybody anything, because we have no business representing our interests in other countries. “Who are we?” It was why Obama thought the Iranians should get a nuclear weapon. He said (impression), “Well, nobody told us we couldn’t. Nobody told us no! Weeeell, who are we to tell them that they can’t have weapons that they want?”

Anyway, let me take a break, and we’ll get started with the Bill Hemmer interview of Bill Barr. But I wanted to set the table with some of this stuff because it’s — I don’t know — fascinating to me the ongoing attempt to undermine Donald Trump by even former members of his administration. It’s so important people understand that these things are happening — these reforms Trump is talking about are happening — for the express benefit and the rebuilding of United States in the image of the good guys and doing good for everybody in the world and ourselves at the same time.