Our Hearts Go Out to the People of Ohio

RUSH: Just a couple things here before we go to the break. At last count, five million people without power in Ohio. Fifty-one tornadoes I saw on the Drudge Report. Nearly half of the population of Ohio is without power early today, including a large and dangerous tornado that was northwest of Dayton. The destruction pictures are devastating. They’re shocking.

This is not that difficult to relate to if you’ve been through any kind of a disaster where there has been significant damage to your home or dwelling. It is unnerving. It is disruptive like nothing else is. And in a wide area of devastation like this where there is nowhere else to go, everybody pretty much in the neighborhood has suffered the same thing. 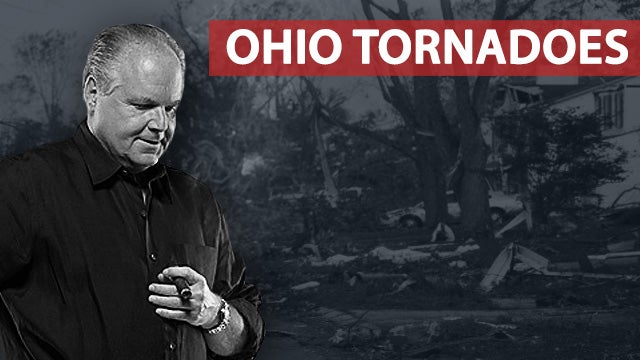 I mean, here your home, your dwelling, maybe your biggest investment and everything in it that constitutes the life you and your family have lived is just gone, ripped to sleds. Man, it’s tough to see, and imagining recovering from it is depressing. It just overwhelms.

You know, with hurricanes, we live in Hurricane Alley here, a portion of it. At least you have days’ warning that a hurricane’s coming and make plans to either ride it out, split the scene or what have you. Tornadoes oftentimes you don’t get enough warning, and even if you do get some, it’s not enough to really get out of the way. You can outrun them, but you’d have to stay on the ground to be able to do that. A tornado is just devastating as it can be and our hearts go out to everybody in Ohio and throughout the other states that have had this happen.

Now, as is predictable as the sun coming up in the morning, these tornadoes are being blamed on climate change. Yes indeed, global warming and climate change made to order. There are actually people out there that are happy with devastation like this because it allows them in their warped minds to advance their warped political agenda.

But I have a little paper here that was submitted to the Fox website from the official climatologist here at the EIB Network, Dr. Roy Spencer, who has weighed in on this. And his paper is devoted to the premise, why are there so many tornadoes this year? And his answer is cold air, not warm air. You cannot have massive squall lines, thunderstorms like this without a lot of cold air being met by warm air. Warm air alone cannot do this. 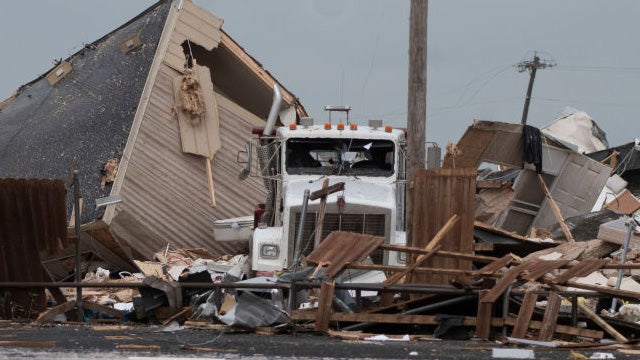 So things warming up, the planet heating up, so forth, which is — I don’t even like saying that because it tends to accept the premise. The climate may be warming and heating up, but it’s not being caused by man and carbon dioxide. But with the tornadoes fresh in everybody’s mind, Dr. Spencer says it’s useful to examine exactly why climate change, global warming has produced fewer, not more of these events. And the simple answer is that tornado formation requires unusually cool air. Very few thunderstorms produce tornadoes. In the hot and humid tropics, they are virtually unheard of.

We don’t get that many tornadoes down here. We’re right smack — we get waterspouts out there over the ocean. We don’t have a whole lot of tornadoes. We get some, but none like they get in the Midwest: Oklahoma, Missouri, Kansas, Nebraska, because you have to have a large mass of cold air, which kind of thwarts the entire premise, climate change and all that.