The Formerly Bulbous Jerry Nadler Confirms All of My Suspicions

RUSH: Right now the formerly bulbous Jerry Nadler is doing a press conference. Ahem. He is chairman of the House Judiciary Committee.  He’s reacting to Mueller, and I didn’t need to listen to this to know what Nadler’s saying. 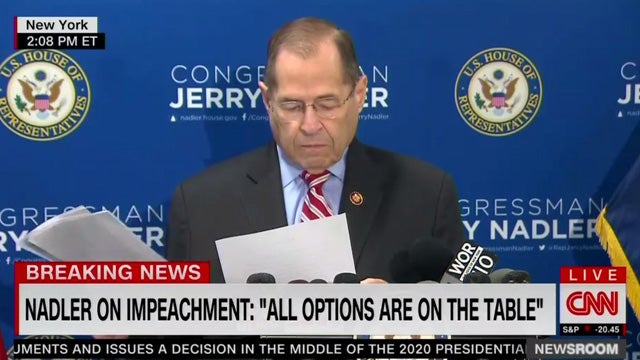 (chuckles) Mueller clearly gave these guys this mirage that Trump is gettable.  That’s what he told ’em! (paraphrased) Trump’s gettable. He couldn’t do it because of Justice Department guidelines. “But by God, by God, we know something’s there!” And he said, “Remedies for things like this reside in Congress,” clearly meaning impeachment.  So, Nadler is out there doing his reaction to this, and it has brought forth a whole bunch of Democrats from behind closed doors beginning now to shout, “Impeachment! We gotta do it. It’s required.

RUSH: Our old buddy Jerry Nadler has come through. He did a scripted press conference, took two questions, he read his statement again in answer to both questions. We have two sound bites. Here is number one.

NADLER: Unfortunately, Special Counsel Mueller was unable to pursue criminal charges against the president because Department of Justice policy prevents a sitting president from being prosecuted. That policy, in my opinion, is wrong, but it prevented the special counsel from pursuing justice to the fullest extent possible. Therefore, as Mueller again highlighted this morning, it falls to Congress to respond to the crimes, lies, and other wrongdoing of President Trump. We will do so. Special Counsel Mueller said loud and clear today to the American people is that President Trump is lying, when he says no collusion, no obstruction, and that he was exonerated. 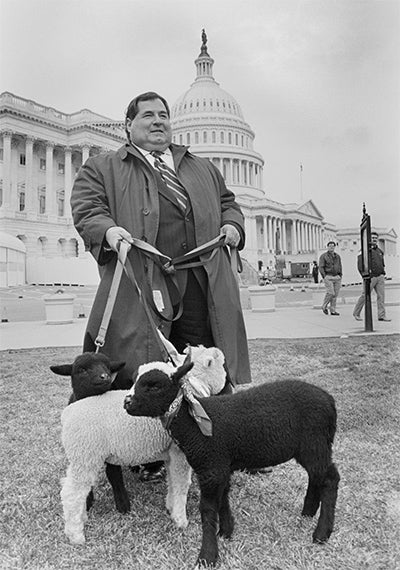 NADLER: If Mueller wanted to exonerate the president from having committed the crime, he would have said so.

RUSH: No. No. This is great. It’s not great. Don’t misunderstand. Jerry’s an idiot. “Special Counsel Mueller said loud and clear today for the American people that Trump is lying”? When did Mueller say this? Mueller did not say that! This is just classic. In fact, the next bite is a response to a question from a reporter, “Are you gonna subpoena Mueller to testify, then?”

NADLER: Mr. Mueller, um, um, told us a lot of what we need to hear today.

RUSH: There you have it! No, I don’t think we need to hear from Mr. Mueller now. Mr. Mueller told us everything we needed to move forward. This is so obvious what has happened here. Folks, this confirms everything that I have thought about and shared with you in this entire program today.

This whole thing today was about Mueller keeping hope alive for these guys to go out and get Trump. He didn’t find any evidence. There wasn’t any evidence, nothing has changed. There was no collusion, there was no obstruction, there are no indictments, Comey is still a leaker, Donald Trump is still president, nothing has changed. But Jerry Nadler’s out there saying that Mueller confirmed that Trump lied. What?

RUSH: Jeff in Quincy, Illinois.  Glad you waited, sir.  Great to have you on the program.  Hello.

CALLER:  Hi, Rush.  My comment today is about Robert Mueller’s investigation and the damage that it’s done even before today’s news. But the damage that he, as a partisan, has done to the Republican Party and to Donald Trump’s presidency.  If you think back over the last two years, there was this pall hanging over everyone. You know, voters going into the 2018 midterms were thinking, “Gosh.  You know, this Trump guy, maybe he colluded with the Russians.”  You know, they were raiding Roger Stone’s house and so on and so forth.  What happens then?

A record number of Republican congressmen did not run for reelection, incumbents didn’t run, and that cost us dearly.  In purple districts, people were afraid to have Trump do a rally.  So instead of losing 41 seats like we did, maybe we would have lost 25 or 20.  I mean, if we didn’t lose the House, they couldn’t even impeach Trump.  I just think the damage that’s been done… I mean, there’s really only one remedy.  The one remedy is to reboot, it’s to undo all of this, and that’s gonna be up to William Barr.  Barr hopefully brings some of the information that you’d like to see Mueller talk about. He’s not gonna talk about it, but Barr can get to the bottom of it.

RUSH:  Well, this is exactly right.  This is another reason why I think that Mueller doesn’t want to testify, ’cause the first question, if I had a chance at him, would be, “You knew there was no collusion six months before the midterms.  Why didn’t you say so?  Why did you allow this to go on until and after the midterm elections?”

That’s why he’s not gonna testify. He doesn’t want that question. He knew when he was handed the file from James Comey there was no collusion. He knew the dossier was it. That’s why I have been blue in the face trying to tell people this was not an investigation. There wasn’t anything to find. There was never any evidence.

Folks, do you realize the power of this state? There was never any evidence that Trump colluded! The only thing they ever had was the dossier. It’s the same thing with climate change. There is no evidence of it. The only thing they have are computer models forecasting it 30 years, 40 years down the road. And then when inclement weather hits, they say, “See? We’re right.”

There isn’t any evidence that man has anything to do with the climate. But do people know this? There was never any evidence that there was any collusion. In fact, the evidence is the opposite, that the Hillary Clinton campaign, the DNC, the Obama administration were doing all the collusion. That’s what is so frustrating about this. And Mueller knew it.

So Jeff here is exactly right. This thing cost Trump the midterm elections. It did cause a bunch of Republicans to retire. The given excuse was that they were losing their committee chairmanships because they’d been term limited. That’s not why. Half of them thought Trump did it! Didn’t want to be in the House when they didn’t run the committee or when they were in the minority.

Incumbency is the most powerful tool reelection has. The incumbency rate is 95% in the House of Representatives. We should not have lost the House. Should not, could not, was not, didn’t matter; we did. But Mueller was culpable in it. And now you say Barr. This is important to remember. Mueller today went out and did his best to discredit Barr and anything Barr says or does from this day forward, folks.

Do not discount this! Barr is on record two different times. One of them testimony saying Mueller told him three times that the office of legal counsel guidelines on not indicting a president had no basis on Mueller’s not finding any evidence of obstruction. Barr said that two different times, one of them under testimony. Today what did Mueller do? Mueller said the only reason that he didn’t indict is because the Justice Department says you can’t.

So somebody is lying big time. And, by the way, it’s not just Barr. Rosenstein and a bunch of other people with Barr are also saying that Mueller told them the guidelines had nothing to do with it. So Mueller goes out there today and says the guidelines are the only reason we didn’t. I guarantee you, the media is gonna say Barr is lying and the reason is so they can discredit whatever Barr comes up with in his investigation of the investigation.

He doesn’t want to get questions the Republicans would ask him, such as, “You knew there was no collusion before the midterms. Why didn’t you announce it?”

He didn’t want to deal with any of that. And now he’s said (paraphrasing), “I’m done. I’m outta here.”