We’re in a Race to Get the Truth Out

RUSH: A couple of little news items here. John Solomon is back with yet another bombshell story in The Hill: “Did Brits Warn About [Christopher] Steele’s Credibility,” Lack of Credibility “Before Mueller’s” investigation began? Solomon claims “Congress Has Evidence” that they did. “Multiple witnesses have told Congress that, a week before Trump’s inauguration in January 2017, Britain’s top national security official sent a private communique to the incoming,” regime, Trump, “addressing his country’s participation in the [dossier] counterintelligence probe into … Trump-Russia election collusion.” 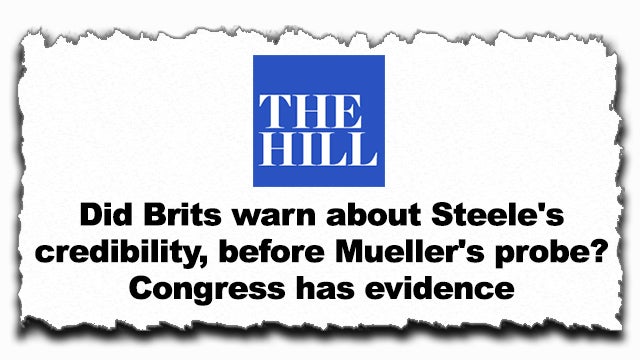 So somebody in the U.K. sent the Trump administration a memo, a communique about their involvement. “Then-British national security adviser Sir Mark Lyall Grant claimed in the memo, hand-delivered to incoming U.S. national security adviser Mike Flynn’s team, that the British government lacked confidence in the credibility of … Christopher Steele’s Russia collusion evidence, according to congressional investigators who interviewed witnesses familiar with the memo. …

“‘A whistleblower recently revealed the existence of a communique from our allies in Great Britain during the early days of the Russia collusion investigation,’ Rep. Mark Meadows (Republican-North Carolina), a member of the House Oversight and Reform Committee, told me. ‘Based on my conversations with that individual, and the credible timelines that are supported by other events, I made a referral to Attorney General William Barr and Inspector General Michael Horowitz for further investigation,’ he added.”

The bottom line is this: Somebody in the U.K. decided to blow the whistle on the Brits’ involvement with the FBI and sent a communique to Michael Flynn (who at the time was the director of national security to the Trump administration), saying (summarized), “Look, this guy Steele’s dossier? We do not verify it, we do not substantiate it, we doubt very much anything in it.” This was before Mueller’s investigation began. The point here is that…

Look, a lot of people now know that the Steele dossier was bogus, and everybody knows now that it was bought and paid for by the Hillary Clinton-DNC consortium using a law firm cutout to make the payment — Fusion GPS, Glenn Simpson — which then forwarded the money to Steele. There were several cutouts here to hide the fact that Hillary was actually paying Steele herself. But the bottom line is, one of the Brits decided to tell them, “Look, this thing is bogus. There’s nothing in it.”

And then after that memo was received, the dossier continually continued to be used by people like Comey and the FBI, and then Mueller! The point of this is that even before the Mueller investigation began, the Brits had told everybody in the Trump administration, “This thing is bogus. We can’t verify it.” Point being, Mueller and his investigators knew — and again, the importance of this is that the dossier is all they ever had. The dossier is all they ever had to get the FISA warrant. “No, Rush! No! They had other things.” No, they didn’t. They used other things such as media reports.

When they submitted the application for the FISA court’s approval to spy on the Trump campaign and they had the dossier, accompanying the dossier were, say, stories in the New York Times and Washington Post. They effectively were saying to the court, “See? It’s not just us at the FBI, Judge. The media’s got hold of this, too.” Well, the fact is the media only knew about it because the FBI had leaked it. The bottom line here is everybody knew. According to this latest story from John Solomon, the Brits knew.

The head of British intel told the Trump national security team, “The thing is bogus. We don’t verify it. We can’t verify it. It’s not corroborated,” and yet everybody continued using it, including Mueller’s team. Chuck Ross at The Daily Caller: “A former FBI official accepted gifts from the media and leaked sealed court information to reporters,” according to the inspector general, Michael Horowitz. “According to a summary of a DOJ inspector general’s report released Wednesday, the former official, who served as a deputy assistant director [at the FBI], accepted a $225 ticket from a reporter to a media-sponsored event.”

So basically, here we have a former deputy assistant FBI director that “provided law enforcement sensitive information to reporters on ‘multiple’ occasions without authorization of the” FBI, in exchange for goodies. So the media was paying for some leaks. And then this from The Daily Caller. This is kind of odd. A theater in Washington, D.C., has “scheduled to host a stage play,” a play on a stage, about Strzok Smirk and Lisa Page. “A theater scheduled to host a stage play about two FBI agents plotting against President Donald Trump has cancelled the performance due to alleged ‘threats of violence.’

“The play, titled ‘FBI Lovebirds: Undercovers,’ written by conservative journalist [and] was reportedly canceled by the venue only seven days after the project was announced,” because there were death threats that supposedly came in. (chuckles) The big news here is the Brits warning the Trump administration’s national security apparatus about the lack of credibility of the Steele dossier. Yet it was continually used after that including to get FISA warrants. You say, “Rush, we already knew that.”

No, the one thing we knew about this is this was an official declaration of, “We don’t believe a word in this,” from a leading intelligence agency officer in the United Kingdom.

RUSH: This is Gail in Newfield, Maine. You’re next. It’s the great to have you. Hi.

CALLER: Hi, Rush. It’s an honor to speak to you, first of all, and real quick… This isn’t my question, but when people have a problem in understanding politics, I say, “Put on Rush Limbaugh! Put on Rush Limbaugh! He will explain things like you’ve never understood before,” and I thank you for that. My question is —

RUSH: Well, wait a minute, now. Wait. I really appreciate that. Thank you very much. I just didn’t want that to go by unacknowledged.

CALLER: You have a way of explaining like no one else can. And you do it, you’re very highly intelligent, but yet you do it on a layman’s term where we can all understand it. You don’t talk down to us. I’m a deplorable. You talk right to me. And I love it. 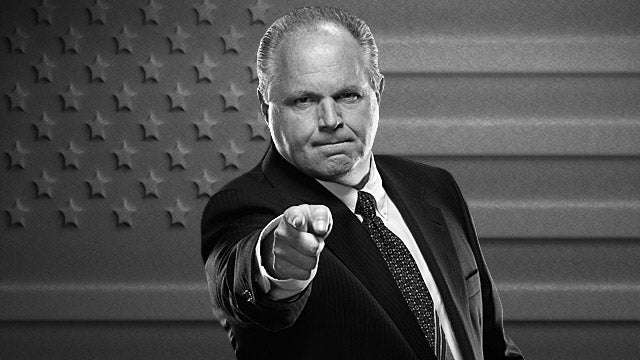 CALLER: My question is last week our wonderful president, probably one of the greatest presidents of all time, said that Bill Barr will declassify — he gave him, you know, permission to declassify everything. When, in your opinion — ’cause you have more insight than anybody I know — when do you think it will happen, A. And B, do you see orange jumpsuits coming for Comey and Brennan and Clapper and Strzok —

CALLER: And you also said one thing last week. You think Trump is getting younger. It’s because he loves what he’s doing. And when you love what you’re doing, it shows. Even with all the persecution, he loves making America great.

RUSH: Do you agree with me that he doesn’t appear to be aging in office?

CALLER: No, not aging. Everybody else in office, Obama looked like he was 102, and all these other ones looked like they were one inch away from the grave, but our president, Donald J. Trump, looks younger, more vibrant, and nobody can keep up with him. I mean, up at six in the morning probably, or before, goes to bed at midnight, four hours, and he’s ready to go.

RUSH: Well, let me get to your questions about the declassification. I really don’t have a whole lot of insight on the procedures here. For example, I have been told that Barr has already declassified. Declassification is not necessarily a release.

Declassification is a process for which there is paperwork and signatures and facial recognition and fingerprint ID, whatever they use to authenticate. It’s not just somebody pointing a finger and waving, “Make that public.” There are procedures. From what I understand, Barr’s already done it.

Now, what you’re really interested in is when does all of this get released, and how? In what setting? In what format? Is it an official presentation? Is there an address from the Oval Office? Does Barr do it himself in conjunction with a press conference with the inspector general when his report’s ready? I don’t know. I don’t know if declassification means publication immediately. Because I don’t know how far along Barr’s lawyer is in his investigation, John Durham.

And it seems if there is a serious investigation underway of the investigation, the declassification of these documents will be backup and, in some cases, may provide guidance for investigators. And it may be that they will wait until they’ve got everything assembled to make their case, rather than just submit this stuff on a particular day.

I think, folks — and I can’t prove this, but I think the reason — I think all these guys, Comey and his op-eds and Mueller going out yesterday and McCabe continuing to do a book tour, going on TV, and Clapper and Brennan all over the place, I think they know what’s coming, and they are doing what they think they can to head it off and to blunt the force of what’s coming.

That’s why I said earlier that we’re in a race with these people to get the truth of this out. Their objective is to get Trump out of office. They would love to do it before the 2020 election, but they’ve only got a year and a half. The race to get rid of these coup people, the race to expose them, the race to inform the American people of exactly what did happen here versus their objective of getting rid of Trump. And the race doesn’t have to be won tomorrow, but it has to be won.

And I think Hillary — I think all these people know what’s coming. I think they’ve been scared to death since election night of the possibility here. The last thing they ever considered was that this stuff that they have done was going to be ever made public. Because they never thought Trump was gonna win.

And these people, I think, aside from the way the media presents them as totally in control and confident, I think they’re sweating bullets. I think it’s one of the reasons Mueller went out there yesterday, and I think it’s one of the reasons, you know, Barr is holding his fire. We’ll just have to see, but I’m confident that the right people are running this and at the right time what you want to know, desperately want to know, what you want to see happen will.