RUSH: This is Bill Richardson. He’s a former State Department guy for the Clinton administration, former governor, New Mexico. I’ve had some dealings with him, he’s been a nice guy. This is crazy. He’s on CNN this afternoon. And they’re talking about the news that Kim Jong-un has executed five people involved in the last failed nuclear summit with the Trumpster in Vietnam.

And so the infobabe on CNN says, “Do you see this on the part of Kim as more acting on impulse than strategy or –” She’s asking, this guy just reportedly executed six of his own high-ranking leaders, officials, whatever, “Is he acting on impulse, uh, or strategy?” (laughing) As though this may be justified. Assassinating, executing six of your top people may be justified. Did he do it strategically, tactically, or was it on impulse? Now, the important thing here is Richardson’s answer. In three, two, one. 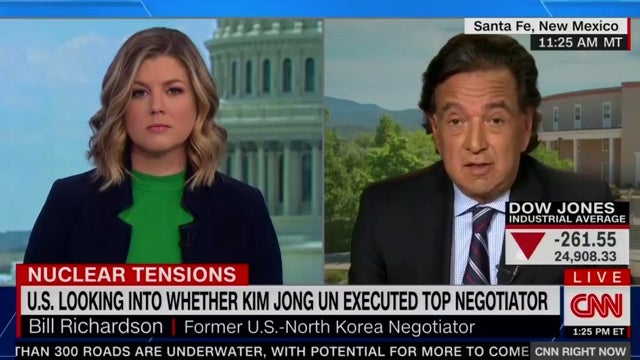 RICHARDSON: I see it more as impulse. He’s unlike his father, who was more restrained, although he also participated in some murders. I see it as him feeling that he was gonna come through with an agreement with President Trump in Hanoi. And he’s trying to blame somebody because I think, like President Trump, he doesn’t listen to his advisers all the time. And I’m sure —

RICHARDSON: — the spy chief told him they want denuclearization —

RICHARDSON: — and we’re not ready to do it.

RICHARDSON: I think Kim Jong-un felt that he and —

RICHARDSON: — President Trump had this special relationship that —

RICHARDSON: — override both of their advisers.

Okay, anybody on the phones want to follow that? Lake Tahoe. This is one of the most beautiful places on earth. Lake Tahoe, and it’s Frank. It’s great to have you, Frank. How you doing, sir?

CALLER: Thank you, Rush. Thanks for taking my call. I just kind of had a statement and maybe kind of a question about the tariffs that are going on?

CALLER: Well, I get really frustrated. You know, we’re in a political and economic war with China, and nobody seems to understand that. And all the people up here that I talk to, all they do is moan and complain about prices going up. And it worries me because everybody’s concerned about that and not concerned about the long-term economic status —

RUSH: Frank, let me ask you a quick question. Are you on the California or Nevada side of Lake Tahoe?

RUSH: Well, that explains it. California is use to price increases, no big deal to them. But Nevada, could be — I understand that people don’t get the importance here. The president’s tried to make the case, so have we here. But, you know, the Drive-Bys are reporting this as Trump being impetuous and endangering people.

CALLER: That’s the problem is they don’t really care because it doesn’t suit their means. Telling everybody that their prices are going up, the only reason why they’re doing it is to try to hurt Trump.

CALLER: And it just frustrates me because to me it’s just un-American not to think about the future of America.

RUSH: Frank, it’s worse than that. Frank, the media doesn’t understand this. The media sees things in such a narrow field, a narrow prism. How can it hurt Trump? How can our reporting of any it, how can it hurt Trump? And they reduce it to the lowest common denominator, which in this case is, “Prices are going up. Things are gonna become more expensive because Donald Trump doesn’t care about you!”