RUSH: Green Bay and John. John, have you heard…? Are you a Packers fan, John?

RUSH: You’re a Bears fan? Well, you’re gonna love the news. Have you heard what happened to the Packers new head coach, Matt LaFleur? He was playing basketball Wednesday night and ruptured his Achilles tendon. It’s his first season as head coach, and he’s gonna be coaching in a golf cart for the next couple or three or four months. It’s gonna —

RUSH: Isn’t it a shame. They’re gonna have to make some changes or adjustments here because coaches are running around the field blowing whistles and he’s gonna be down. It’s actually… They don’t want players doing this for this exact reason. In the off season, don’t play basketball. He’s a first-year head coach and he blew out his Achilles, and I just read about it, and I saw you up there from Green Bay. You’re a Bears fan in Green Bay?

RUSH: Why did you call? We’re glad to have you here.

RUSH: You’re a lifer. That’s from the very get go.

CALLER: Yes, sir. Yep. I picked up on you when I was serving in the Army myself, which kind of leads into my train of thought. I haven’t heard of this line of discussion yet, and that’s on Elizabeth Warren’s “free college,” quote, unquote, kickbacks that she’s wanting to do. I call it a kickback, but she’s calling it free college. And I just had a thought that my sons and I, we’re all veterans. My younger son is back to the Middle East right now as we speak. You know, a lot of people that I served with went in specifically for the GI Bill. With that being said, if she’s giving free college, in my opinion, I think that’s going to eliminate a lot of quality people going in the military and could hurt the numbers in the military as well. I just wanted to know what your thoughts were on that.

RUSH: In fact, you know, I’ve got a sound bite here. I’m looking for it, and I just found it. Grab sound bite number 20. I had not looked at this from the GI Bill angle. That’s an interesting look at this. My take on Fauxcahontas and her proposals is a little bit more generic. She wants free, what, health care? She wants to forgive student loans. She wants free tuition. And she’s for a guaranteed annual income. So why the hell does anybody need a job?

Therefore, why does anybody need an education? Why do you need an education if you’re not gonna need a job, if everything’s gonna be free? Now, your angle here on the GI Bill. Giving college for free would affect the military. But, wow, anybody would be able to go to college for whatever reason if this ever really happened. The sound bite we have… She was on a syndicated radio program called The Breakfast Club and the host is Charlamagne tha God. 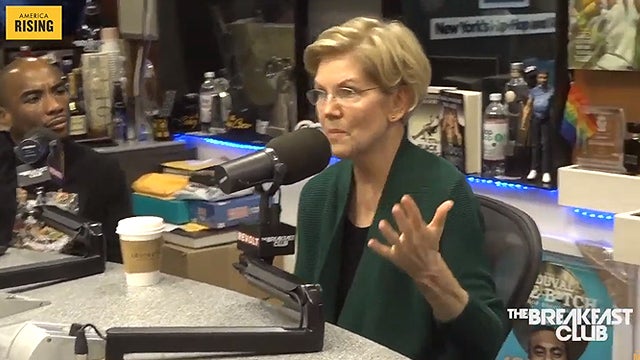 WARREN: So… it’s… what I believe. You know, that’s… Like I said, it’s what I learned from my family.

THA GOD: When did you find out you weren’t?

WARREN: Well… (sigh) You know, it’s… I’m not a person of color, I’m not a citizen of a tribe, and tribal citizenship is an important distinction and not something I am. (nervous laugh)

WARREN: Well, this is what I learned from my family.

RUSH: Yeah, yeah, yeah. (laughing) (impression) “You a fraud, babe! You a fraud. You like Rachel Dolezal said she’s black but she wasn’t. You say you’re Indian but you ain’t! When did you find out you wasn’t?” (laughing) Here’s a series of questions that come from the real world, and here is this Harvard professor — this professional politician — trying to answer this stuff. Can you imagine? The way she comes across in this thing is just pho-ny, pre-ten-tious.

(sputtering) “Well, it’s what I was told. My family told me! My father and mother. High cheekbones and so forth.” “Well, when did you find out you weren’t?”

“Well (sputtering), I’m not a member of a tribe and course that really matters and I’m not a person of color.”