They have been trying to drive his approval numbers down. That’s how they were going to get to impeachment. They can’t impeach right now. There’s no way they can. Pelosi knows. Did you see Pelosi was on with Jimmy Kimmel last night? By the way, greetings. It’s 800-282-2882 if you want to be on Open Line Friday. Kimmel’s an idiot. You know what Kimmel said? “We haven’t even seen the Mueller report!” We haven’t seen the Mueller report? It’s only been out since, what, May 1st, May 12th, whatever it was?

What do you mean, we haven’t seen the Mueller report? (interruption) Oh, you think he’s talking about the redactions? (laughing) The 2% that we haven’t seen means we haven’t seen the Mueller report! Anyway, he’s demanding that Pelosi impeach Trump (he can’t tell her why, it just has to happen) and she’s trying to talk him out of it. And she says, “Look…” And she finally gave it away. She says, “Look, we can’t impeach him and have him acquitted in the Senate. If we impeach him and he’s acquitted in the Senate, it destroys everything we’re gonna try to do about him being unqualified, disqualified, all of that, in our campaign.

“We can’t do that if we can’t get a conviction.” But it didn’t even register with Kimmel. He didn’t even want to hear it. “You gotta impeach. We gotta get rid of this guy.” When they see this approval number, they’re gonna go battier than they’ve ever been, because their whole effort has been to drive this number down. Now, you may have heard me say this over the years and thought it was a throwaway line or a throwaway objective. It really isn’t. That’s how they got rid of Nixon — and remember, they’re living in the past, folks.

They are trying to relive past glory, and that’s how they got rid of Nixon without impeaching him. They forced him to resign. They’ve been doing that for a number of reasons, I think primarily to show themselves that they can, and this is another reason why they’re gonna be really batty. This is… They’re staring failure right in the face. They have been trying to destroy Trump. They’ve been trying to drive a wedge between Trump voters and Trump.

They have been trying to dredge up anti-Trump public opinion. And they have failed. And they’ve given it everything they’ve got, and they thought… Now the Mueller report comes out after Mueller’s press conference a couple days ago, they think, “Man, things are falling our direction,” and they’re not. It’s just going the opposite way. You couple this with the fact that Trump does not give up, as I mentioned an hour ago.

He does not give up in attempting to accomplish and achieve his objectives, and I am confident in telling you that they’re going nuts. Privately, going nuts. And I think you’ll see evidence of how nuts they’re going when they start… I think we see it every day anyway. But these are people… You have to understand, these are people (in their minds) who are the smartest people in the world, smartest people the country, most powerful people the country. They define who succeeds and who doesn’t. They define what happens. They define the culture.

They define whatever the establishment wants to define — they do it — and here comes this guy and he is literally showing them up and exposing their incompetence and their failure every day. You can see it… I mentioned yesterday that CNN had a banner graphic at the bottom of the screen running all day: “Trump Erupts with Flurry of Lies Following Mueller Press Conference.” That’s nothing but utter frustration. That is just… In addition to not being correct, it typifies the fact that the people working at CNN are beside themselves. 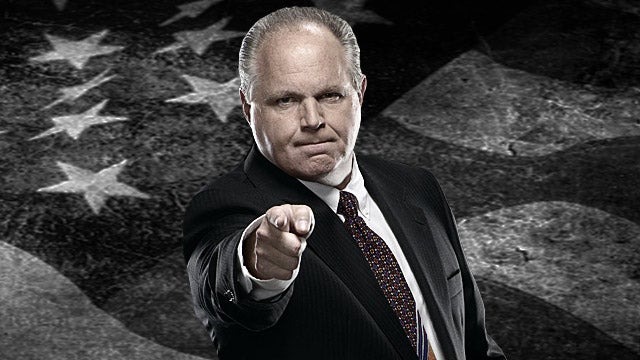 They’re at their wits’ end trying to convince you that Trump is a bad guy and that Trump needs to go, and so they’re pulling up all the stops. “Donald Trump falsely said…” “Donald Trump falsely…” “A flurry of lies…” And their anchors are carrying the message forward. And their guy they’ve relied on, Mueller, just doesn’t come through for ’em. Not to the extent that they hoped. Now when they see this poll out today from Harvard-Harris? (chuckles)

I want to advise you of something else. I do not watch MSNBC. I haven’t had MSNBC on in years, folks. I’ve got a ban on playing any audio from their hosts and hostettes, and I occasionally lift the ban if some newsmaker says something there. I am told today… Let’s see. This morning on a program there they have called Morning Joe. I guess that’s Scarborough. Apparently, Donny Deutsch — who is a former New York City advertising executive and now is one of these lost-in-insanity, left-wing activists disguised as a cable news host.

Donny Deutsch had a segment where he showed a clip from a movie depicting a Frank Luntz-type focus group, and in the movie… I don’t know what the movie is. I don’t know if it’s theatrical release. I have no idea what the movie is. But in the movie… He’s playing a clip of this. In the movie, they tested different words to get different responses from participants. For example, they tested with this focus group, “estate tax” versus “death tax.” From the Democrat perspective, which would be the best term to call this to advance what they want to do with it?

Well, he came out of that clip and announced, Deutsch did, that… (Cookie, do not get me the audio. I don’t want the audio. I’m not gonna play the audio. After I say this, I’m not gonna need it anyway.) He came out and announced that for the next 16 months, the term “impeachment” needs to be banished by Democrats because it doesn’t work. You know, Trump even went out the other day and said, “It’s a dirty word. I don’t even like the word. It’s a dirty, stinking word.”

Apparently, the upshot here is they have focus grouped the word “impeachment,” and nobody likes it. So the Democrats… We’ll see if this is true. Democrats were advised today to drop the usage of the term “impeachment” and replace it with “Trump criminal investigations.” That’s the new phrase. Apparently, they focus grouped it, and if you talk about “Trump criminal investigations,” it plays much better with voters than talking about impeaching Trump.

So now they’re talking about Trump’s businesses, his tax returns, charitable donations and all this. It’s all related to trying to get hold of as much of Trump’s financial data as they can. This is what the Democrats are focusing on.

So since MSNBC and the Democrat National Committee are one and the same, don’t be surprised — I’m just giving you a heads-up here — if all of a sudden on cable news you start hearing talk about Trump criminal investigations instead of the word “impeachment.”

Now, lamebrains like Jimmy Kimmel are gonna still talk about impeachment and some of the others, but if you start seeing official elected Democrats and analysts, party people like Donna Brazile start using the phrase “Trump criminal investigations,” keep in mind that it’s been focus-grouped and that’s why they’re using it, because “impeachment” is not testing well.

The Democrats keep talking about it. They keep talking about Mueller because they don’t want this to die. They can’t find anything to impeach Trump over. And Pelosi gave it up last night anyway. (imitating Pelosi) “Look, we can’t afford to impeach and have him acquitted. If he’s acquitted, he’s cleared! We can’t do that.” Kimmel didn’t understand or didn’t get it.

RUSH: By the way, the story at TheHill.com today that says only 50 congressmen, 50 out of 538, want to impeach Trump. They’re all Democrats plus that one wacko Republican out there. That is less than 10% of the Congress who wants to impeach. These are the people that would have to vote for the articles and authorize House managers and send the indictments up to the Senate to trial.

There just isn’t any stomach for this. They’re doing this for fundraising, purely and simply and to keep lunatics like Jimmy Kimmel at bay, but there really is no future. Pelosi again (imitating Pelosi), “We can’t afford for an acquittal. The American people cannot see the president as innocent. We can’t permit the American people to see our president as innocent. Don’t you see, Mr. Kimmel?”

“You need to impeach the son of a – this is ridiculous. The guy’s an idiot.”

“But we can’t get a conviction in the Senate, Mr. Kimmel, and so he would be acquitted, he would be not guilty. We can’t do that.”

“Well, you’re (unintelligible), impeach him!” That’s what she’s up against.