Biden Under the Microscope: Rival Dems Attack; Plugs Present at Birth of Coup

RUSH:  Now, at the California Democrat convention… This was a prelude of things to come.  In addition to Hickenlooper being booed practically offstage for saying socialism doesn’t work, and with the assembled multitudes demanding that Pelosi impeach Trump and just be done with it, they also — the candidates that were there — tore into Biden.  They ripped Biden a new one.  One reason: For not being there.  They also went after him because Biden is being positioned as a “centrist,” i.e., not a raging, leftist, socialist lunatic.  So they just…

This is within the context of the California state convention, but wait ’til it starts happening campaign-wide.  Biden has come out of nowhere as the unquestioned frontrunner.  He has supplanted and replaced Crazy Bernie.  Crazy Bernie’s still trying to figure out what happened.  He doesn’t know what happened.  He’s running the same campaign as he did.  The difference for Crazy Bernie… I mean, there are many things.  I think the problem Crazy Bernie has is the Trump economy has improved things for Bernie’s support base, and so Bernie’s promise to give everything away is now seen differently and not as necessary.

Bernie has not adapted.  As far as Bernie is concerned, the country’s still where it was back during the 2016 campaign.  Of course, no matter what the Democrats want to say, it’s better. Economically it’s better for a significant number of people, particularly in the parts of the country where it had to be ravaged.  Now a lot of Bernie’s people that were in their pajamas and the basements of their parents’ homes are now out working and doing things, and it’s just a different set of circumstances.  Bernie has not “adapted.”  It’s a key word.

But “[t]he liberal wing of the Democratic Party launched … attacks against [Joe Bite Me] and his allies over the weekend… Some of the most scathing … admonitions came Sunday from [Crazy Bernie], who repeatedly condemned ‘middle ground’ policy ideas and appeared to criticize Biden for not attending a Democratic gathering” in California.  Fauxcahontas “delivered a fierce rebuke of Biden’s professed faith that Republicans will be more cooperative once President Trump is out of office. The crowd showered her with loud cheers” when she ripped Republicans.  They don’t want to hear about cooperation with Republicans! 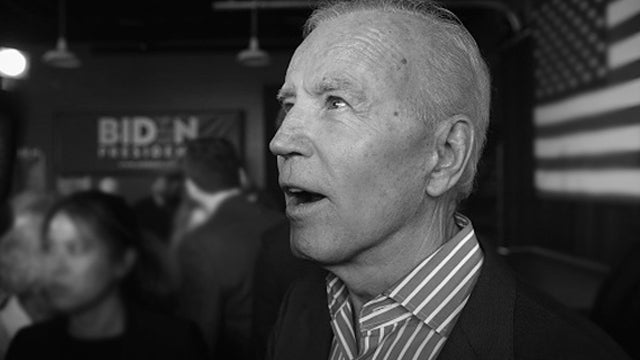 They don’t want to hear about crossing the aisle, reaching across, getting along.  They don’t want to hear about that.  They want Republicans gone!  They want Republicans ended.  They don’t want any opposition, and here is Elizabeth Warren saying that Biden is trying to forge areas where that kind of existence can take place — and this crowd just savaged Biden.  Now, where was Biden when this happened?  Do you know where Biden was?  Biden was in Iowa.  He was not on the couch somewhere, and he was not at a 7-Eleven chewing up, you know, some of the snacks you get there at the cash register.

He was actually at an LGBTQ event, a human rights event somewhere — a human rights convention, whatever it was.  So it is not as though Biden was just wasting his time and didn’t show up.  He’s actually cultivating a very premier, left-wing Democrat group by appearing at one of their gatherings.  I think this is gonna backfired on them in time.  If Biden had been somewhere just taking the weekend off and had chosen not to go to San Francisco… But why didn’t Biden not go to San Francisco?  Why didn’t he want to go?  Why didn’t he want to go out there? (interruption)

Well, you can say, “Because he knows they’re nuts,” but let me tell you something.  That is the Democrat Party.  You can say they’re nuts, but that’s who they are.  But then that’s contraindicated by saying, “Here’s Biden leading the Democrat primary by a significant number,” and he is not considered a New Age, current-era socialist like the Democrat Party is being portrayed as.  So which is the case?  Is it that Biden knows that they are a subset of the party and are wacko, nuts and crazy, and he doesn’t want even get cheers from them for fear of how that will look?

Or are they the party? Are they the majority of the base and is he in trouble if he gets the nomination, because some of Crazy Bernie’s voters have said that if Crazy Bernie doesn’t get it, they are voting for Trump.  We don’t know the answers to any of that, but we’re gonna know in not too long a time because it’s all gonna start shaking out, because the Democrat debates are coming up. It’s almost summertime.  Folks, it is June.  It is June the 3rd.  It’s not officially summer yet, but for all intents and purposes… It’s June.  I can’t…

You know, time is a crazy.  Some days it just appears to be dragging and dragging, and one day, you’re in June already?  And that means these Democrat debates are gonna be starting soon.  Everybody’s in the first one but making the cut after the first one that’s gonna be a big cut in how they’re gonna do it.  When those start is when all those delicious fireworks are gonna begin, and we’ll have a better idea what we’re up against.  Now, the Breitbart story I referred to, headline: “Biden Present at Russia Collusion Briefing Documented in ‘Odd’ Susan Rice Email.” 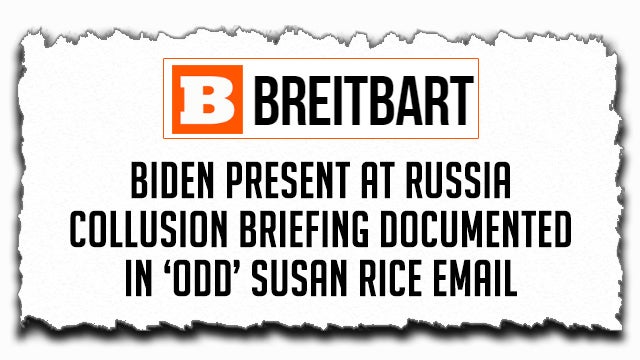 Susan Rice sent a long-after-the-fact email out that attempted to establish a set of norms that would explain why the administration was unmasking a bunch of people like Flynn that were being overheard in wiretaps.  She wrote an email that was supposed to be a memo of the time to try to establish it as normal.  “Vice President Joe Biden was documented as being present in the Oval Office for a conversation about the [Russia investigation] between President Obama, disgraced ex-FBI chief James Comey, Deputy Attorney General Sally Yates and other senior officials including Obama’s national security advisor Susan Rice.

“In an action characterized as ‘odd’ last year by then-Senate Judiciary Committee Chairman Chuck Grassley, Rice memorialized the [meeting] in an email to herself describing Obama as starting ‘the conversation by stressing his continued commitment to ensuring that every aspect of this issue is handled by the intelligence and law enforcement communities “by the book.”‘”

She wrote this memo months after this meeting and then postdated it to make it look like she had written the memo/the letter at the time.  So two months after everybody is starting to wonder, “What the hell is this administration doing in this investigation?” Rice writes this memo to make it look like Obama had told all these guys (impression), “Hey, you play this by the book.  I don’t want any funny business.  I don’t want any violations of the human rights, civil rights, whatever.  You do it by the book.”

Well, it was like writing a memo saying, “We’re not gonna rob the bank and it’s a bad idea,” after you’ve robbed the bank. That is essentially what she did.  Grassley, in his letter to her, said, “It strikes us as odd that, among your activities in the final moments on the final day of the Obama administration, you would feel the need to send yourself such an unusual email purporting to document a conversation involving President Obama and his interactions with the FBI regarding the Trump/Russia investigation.” It was clearly meant to provide cover because it was…

As far as the investigation and the Drive-By Media reporting on it is concerned, he’s clean and pure as the wind-driven snow. He was nowhere near any of it. Have you ever heard Biden’s name associated with it? No. But now people have gone back and looked at her memo. He was in this meeting that she memorialized with Comey — folks, this is the meeting Comey, Clapper, Brennan, they’re discussing how to tell Trump about the golden showers story.

Let me be clear. It’s this meeting in early January, and it was the next day that Comey and Clapper and Brennan went up to meet Trump at Trump Tower. And then after that meeting, Comey asked to speak to Trump alone, and Clapper and Brennan leave, and Comey tells Trump about the golden showers. And then after the meeting, Comey calls Brennan on the phone, says, “Mission accomplished.” 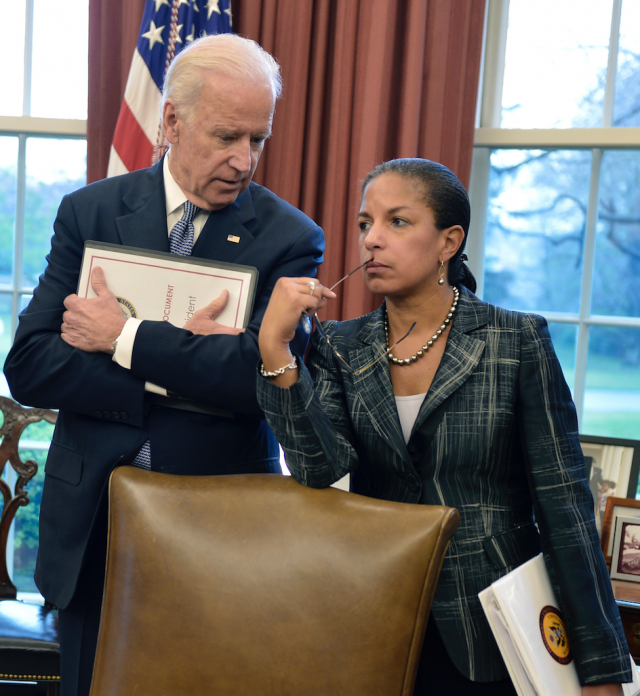 And then Clapper called CNN and reported it, and we are off to the races. Susan Rice’s memo is to say that that meeting went by the book and that Obama was telling everybody don’t play any funny games here, don’t do anything out of bounds or any of that. Because nobody was supposed to know any of this. But the point about it is that Biden was in the meeting.

Now, in the email, Susan Rice used the “by the book” phraseology a second time. She wrote, “President Obama began the conversation by stressing his continued commitment to ensuring that every aspect of this issue –” the Russian-Trump investigation, “– is handled by the Intelligence and law enforcement communities ‘by the book’. The president stressed that he is not asking about, initiating or instructing anything from a law enforcement perspective. He reiterated that our law enforcement team needs to proceed as it normally would by the book.”

After that, she discussed the possibility of issues sharing classified information with the incoming Trump administration, referring to alleged concerns the Trump campaign had been colluding with Russia. That part of her email reads, “The president asked Comey to inform him if anything changes in the next few weeks that should affect how we share classified information with the incoming team.”

Now, point of this is the detail about Biden being present at the meeting with Rice and Comey is newly relevant because of questions about Biden’s possible role in all of this now. This is all about, “How much should we share with Trump? How much of what we’re learning about the Russians attempting to affect the election –”folks, none of this was real.

It was all structured and made up. And her memo after the date that it happened was meant to be a memo written on the day of the event memorializing it so that nobody could claim it was something other than what it was. But the upshot of it is that Biden’s name is in it now, and that’s relevant for whatever might happen investigation-wise with Barr and Durham and with Biden’s presidential campaign, ’cause he’s gotten a free ride on all of this stuff by remaining in the background for so much of it.