Democrats Struggle to Feed the Lunatic Base They Created

RUSH: Now, let me move on from some of these stories about Trump and the U.K. I think half the protests in the U.K. are bought and paid for, by the way, either by the Brits or by the Americans. I think half of it’s phony. The stupid mayor over there is writing op-eds and saying blasphemous things, comparing Trump to Hitler and the Nazis and so forth. It’s just absurd. And yet the president’s going through with this and fighting back as he always does.

But back here in the United States the Democrat Party continues to not know what to do. They don’t know what to do about Trump. They are at their wits’ end. They are frustrated beyond your ability to understand how frustrated they are. Because they expected the Mueller report to finally nail Trump. And since that didn’t happen and Mueller’s press conference didn’t make it happen, they are beside themselves.

So over the weekend was the California Democrat convention. And we have some audio sound bites of this. We’re gonna start with sound bite number 16. Here is Pelosi herself right from that video. She’s at the California state Democrat convention in San Francisco on Saturday, and during her remarks she’s interrupted by a bunch of hecklers in the audience who start demanding that she impeach Trump. 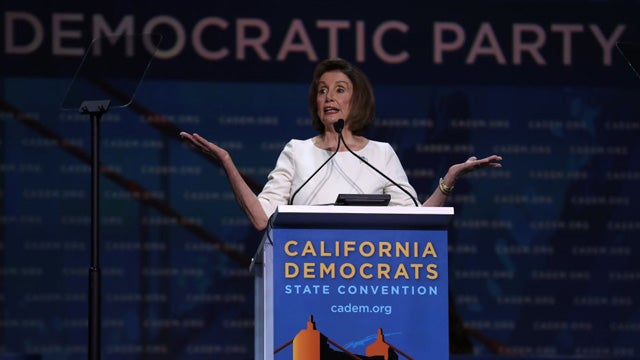 PELOSI: The president’s campaign welcomed Russian interference in the election, and the report lays out 11 instances of possible obstruction of justice by the president of the United States. (hecklers) I tell you, this is like coming home for me. (laughing)

RUSH: I listen to this, and I listen to Pelosi misrepresent what is in the Mueller report just to feed this beast. She literally has these lunatics. The Democrat Party has created these people, and not just the past two and a half years. They have been creating this lunatic base and feeding it intensely since the George W. Bush administration. Both terms. But it has really now come to a feeding frenzy.

The Democrats went way overboard in their mass extremism making sure everybody got the message and they kept pummeling people with it that eventually — in fact, even half the elected Democrats have now bought into these things that are now abject and demonstrable lies. 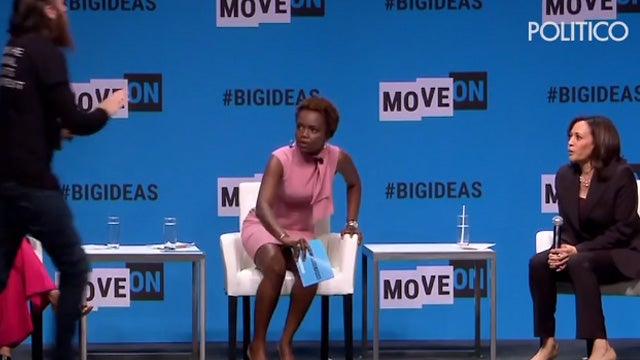 Did you see what happened on I think it was Saturday or maybe Friday at that convention? Some wacko got hold of a press lanyard and walked on the stage and took away the microphone from Kamala Harris. She was sitting there going on about some brainless thing she was saying. Maybe it was animal rights or some such thing, and some guy just walks up on the stage.

He’s got all the press credentials, he’s a longhaired, maggot-infested rock ‘n’ roller type, and just walks right up to her, and nobody stops him, and takes the microphone from her. And she just sits there. And then the moderator, “Uh, sir, uh, sir that’s not how we, sir,” and this guy keeps rambling on about climate change or some such thing. “Sir, we don’t do –” And finally her husband gets in the act and starts hustling the guy off the stage, Douglas Emhoff. She leaves the stage never to be seen again, and they take this wacko off the stage. They just let him walk up there and take the mic. She wasn’t saying what this guy wanted to hear.

Everybody thinks that the Trump rally crowds are these brainless maniacs. Folks, it’s exact opposite. It is these people at Democrat conventions and Democrat rallies who are truly, truly dangerous. They are a powder keg waiting to explode. Do not doubt me on this. 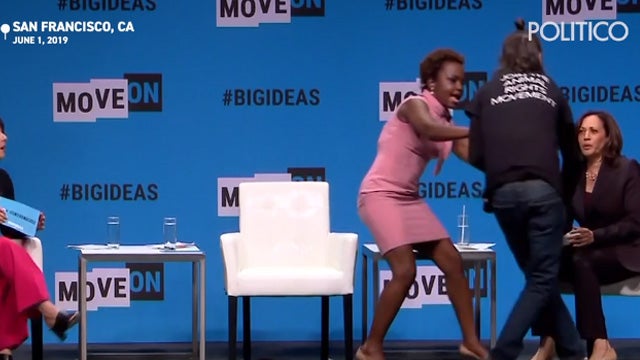 And the Democrat Party has created this group of people. And they have to keep feeding it ’cause they need their money, they need their votes. These people want Trump frog-marched, they want worse than that. They don’t want Trump in jail. They want him executed. They want capital punishment for Trump. And these Democrats are not acting on it, and they’re getting frustrated out there.

They’re trying to talk around impeachment. “We’re gonna do it, but maybe but not now. We’re thinking about it.” They don’t want any hesitation whatsoever. They want Trump and they want it now. And if Kamala Harris isn’t gonna do it, if Pelosi isn’t gonna do it, they’re gonna storm the stage and try to make it happen themselves.

I was really struck by the lack of security. This guy, by the way, he’s maybe a little tall, but he’s got this long beard, he’s a maggot-infested, you know, dope smoking rock ‘n’ roller type. The Democrat Party’s known for these people. He could have been in an Obama commercial about Obamacare, you know, having his little garden in the backyard and, you know, waiting for every government check, this and that. 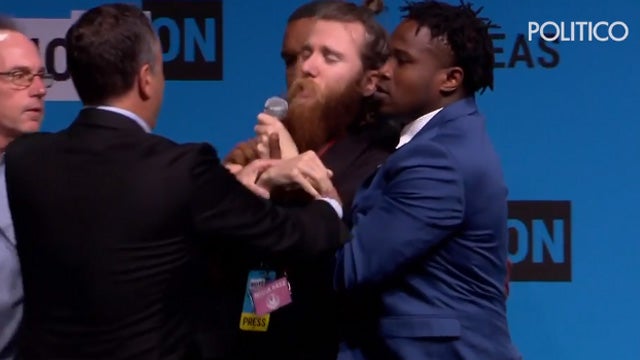 He just strolls up on stage and takes her microphone while she sits there and doesn’t do a thing about it. And nobody did for 35 seconds or so. And then they said, “Sir, would you please, sir, this is not –” rather than getting some beefy people up there to hustle this guy off the stage, they tried talking to him, and he keeps preaching about climate change.

And now Pelosi is being heckled (imitating Pelosi), “The president’s campaign welcomed Russian interference in the election and the report lays out 11 instances of possible obstruction –” And the audience, “We’ve known this for two years. You told us that Trump stole the election.” They don’t want to hear this. They want to hear how Trump is going to be executed, folks.

By the way, grab sound bite number 20. Michael Mukasey, former federal judge, former attorney general, he’s got a reputation equal to that of William Barr. When I tell you that Mukasey is a good guy, don’t doubt me. Mukasey was on Sunday Morning Futures with I think it was Maria Bartiromo. I’m not sure.

He was on the way to making a great point, and I think he got interrupted by a computer driven commercial break. “When you look at the informants and the wiretapping and the abuse of the FISA court, it just seems so bad –” This is Maria Bartiromo asking the question. “Do you think we’re actually gonna see accountability because the left is trying to take Barr down right now.”

MUKASEY: There are a lot of nervous people in Washington. When he decided that he was gonna investigate how this all got started, I think a lot of people got very nervous. I’ll tell you that the Mueller report, the first line says that they opened the file in 2016 after Papadopoulos had this conversation in the bar. That’s not what started the investigation.

RUSH: In other words, folks, in other words, the opening line of the Mueller report is a lie, the opening line, the opening sentence in the Mueller report is not true. And everything then descends from there. And Mukasey points out that the report makes — and it really does. He’s right about this. They claim that the start of this was in Papadopoulos getting drunk in a bar talking the Australian ambassador, Alexander Downer, about the Russians having dirt on Hillary and Downer calls the FBI.

And that’s what the FBI has long wanted everybody to believe got this all started. But it didn’t start then. It started way earlier, maybe as early as 2015. This has been debunked already, the Papadopoulos angle here. And yet that’s how the Mueller report opened.

So the first line in the Mueller report is an abject lie. Here is Pelosi desperately trying to keep her audience in their seats. But they’re long past being satisfied hearing what the report says. I’ll give you one more example before we go to break. At the same convention, John Hickenlooper, who is a Democrat former governor of Colorado, he wants the Democrat presidential nomination, and he started telling these people that it’s a mistake for the party to be recognized or to go in the direction of socialism.

HICKENLOOPER: Socialism is not the answer.

HICKENLOOPER: You know, if we’re not careful, we’re going to end up helping to reelect the worst president in American history.

RUSH: California state Democrat convention, and those are not just a couple, three boos out there. That’s the whole damn place erupting when he says, “socialism is not the answer.” I’m telling you, folks, the Democrat Party, it’s amazing what they have done to themselves.

RUSH: We’re gonna get started on the phones.  This is Byron from the “Soviet bicycle community” of Davis, California. It’s great to have you on the program.  Hello.

CALLER:  Hey, Rush. Thanks for taking the call.

CALLER:  Tip to Mr. Snerdley for putting me up here.  You were talking about the Democrat Party today, the state, and I saw that clip of that guy getting up on the stage and going after Kamala Harris and whatnot or taking the microphone from her.  And when you were talking, it reminded me… I’m two years older than you. It reminded me of the 1968 Democratic convention in Chicago.  That was the year Humphrey was running with Muskie on his ticket, and the place went crazy.

I was a kid in those days, young man.  (chuckles) I was leftist, sort of that direction.  I’m no longer that way, but I was, and I almost went to that. I almost hitchhiked from here, from California out there.  I didn’t.  I ended up joining the Navy within a month or so after that.  But you remember that? The place went up in flames. That was Mayor Daley. That was the police response. That was the Chicago Seven, I think you called them. I think Bobby Seale and the Black Panthers were there.

RUSH:  Obama’s buddy, Bill Ayers, was part of that group, too. 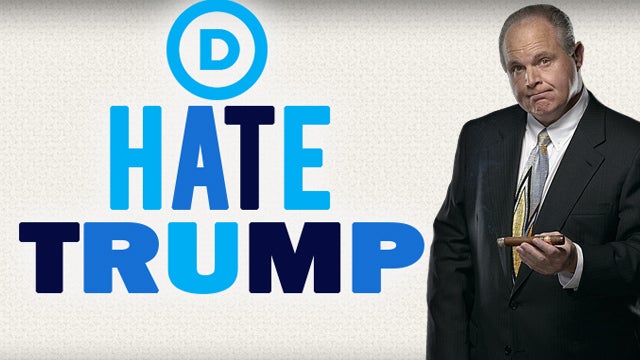 CALLER:  Exactly.  There you go.  So today’s Democrat Party, in many respects, reminds me of the party back then.  And you mentioned the tinder keg (sic) and whatnot of what these guys are today as opposed to, let’s say, a Trump crowd, which is a complete opposite of that, and I just thought that was interesting. I’m glad I got through to make that comment to sort of throw you the ball on that one, because it does remind me of ’68 and it could go up at any moment, with the radical Democrats.

RUSH:  Well, that was the Democrat National Convention in Chicago.  And the Vietnam War was the backdrop for that series of protests and bombings and fires — ostensibly, the Vietnam War was.  If you wanted to draw an analogy/comparison, Trump would be the equivalent of the Vietnam War.  But my point here is… I’ve often told people: If you want to see where this country is headed and you don’t want it to go there, California’s the model. Illegal immigration, sanctuary cities.

By the way, folks, the news out of Los Angeles and that rat-infested downtown police headquarters? Five officers have now been tested positive for typhus or something.  The state of California is the epitome of have and have-not.  This is just classic.  Now, you have a guy, former governor of Colorado, warning these people, “We’re not gonna win anything if we go socialist,” and this place erupts.  It literally erupted in boos.  The California state Democrat… California is already socialist terms of its political identity, its policies, and may be drifting even further left.  Again, I find myself out of time.  But not really, because there’s two hours left.