RUSH: How many of you remember the name…? Well, you won’t remember the name Robert Smith.  Do you remember the story? This billionaire hedge fund guy, an African-American, who was at Morehouse university doing the commencement address, and he promised to pay off the graduating class’s student loans.  Now, you would think that this would have been met with applause and cheers.  But noooo.  The left is outraged!  They are beside themselves with anger.  “Well, what about everything else?” they are saying.  Who is this guy? 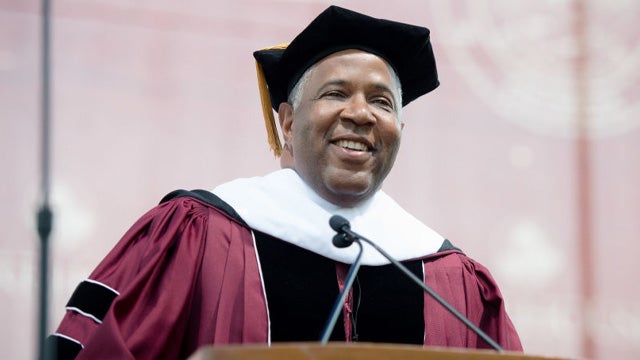 “Robert Smith was raised in a working-class Denver neighborhood in the 1970s. A high-school science class in his junior year sparked his interest in transistors, the building blocks of computers, cellphones and other electronic devices. … He applied for a summer internship there but was told it was available only to juniors and seniors in college. Unbowed and impatient, he spent months pestering people in the human-resources department to give him a shot. Eventually, they did.

“Mr. Smith went on to earn an engineering degree at Cornell and a business degree from Columbia. He worked as a chemical engineer and then as an investment banker. In 2000, he started a private-equity firm that focuses on investing in computer software companies. His net worth today is $5 billion, which makes him, according to Forbes magazine, the richest [African-American] in America.  Mr. Smith urges others to be generous with their wealth, and he leads by example. He has financed college scholarships for minorities and women and set up a foundation that exposes inner-city kids to nature and the arts.

“He funds nonprofit groups that support underprivileged children interested in studying math and science. He gave $50 million to his alma mater Cornell and another $20 million to the National Museum of African-American History and Culture in Washington. He has pledged to commit more than half of his wealth to philanthropy.  Mr. Smith has kept a relatively low profile over the years, but earlier this month he made a splash with his commencement address at Morehouse College, a historically black institution in Atlanta.

“Toward the end of his remarks, Mr. Smith announced that he would pay off the student loans of the nearly 400 graduates. The students … were thrilled, of course, but others just saw another opportunity to score political points.  A New York Times story about [this] noted the ‘growing calls across the country to do something about the mounting burden of student loan debt,’ then informed us that ‘presidential candidates like Elizabeth Warren have made debt cancellation a key plank in their campaign platforms.'”

This guy was said to be going about it the wrong way.  The “right” way was what the Democrats want to do! Give it away. Just forgive all the loans.  “The paper even found an expert critic of private charity who said he feared that ‘a gift like this can make people believe that billionaires are taking care of our problems, and distract us from the ways in which others in finance are working to cause problems like student debt, or the subprime crisis.'”  So here’s a guy, an African-American, who offers to pay off the student loans of the graduating class when he’s doing the commencement speech.

I’m reminded of David Koch (who is not African-American) and his wife donating something like $50 billion, $100 billion, whatever it was, to build a new wing at some New York Hospital. The nurses and some of the others, employee unions, pestered the hospital not to take the money because the Kochs are a bunch of racists and they’re just trying to make themselves look like they’re not racist.  They don’t really mean it.  (chuckles) So what is charity really all about, if charity in and of itself is suspect and not permitted when it comes from billionaires, even African-American billionaires?

Anything that makes the government look like it can’t deal with the problem is gonna be ripped and criticized.  Can you imagine this guy how…? He’s being urged not to do this.  There is pressure being applied to Robert Smith to withdraw the gift. (impression) “He’s no different than the early robber barons.  He’s trying to buy love! He’s trying to buy affection.  He doesn’t care about these kids!  He’s just doing this for himself.”  The same garbage that we always get whenever somebody comes in and effectively takes over the role of government.

Isn’t this the argument these people always mount about supply-side, that it never trickles down?  Hasn’t the argument always been, “The problem with supply-side’s the rich don’t give away the money! You know, it never does trickle down.  It always stays with the rich.  They never take care of anyone.”  So here comes a guy who is demonstrating the antithesis of their criticism of trickle-down. It’s trickling down.  Ah, ah, ah! These blatant hypocrites are not… (chuckling) Some days, folks, it just boggles the mind trying to keep all of this straight.