RUSH: So more Hillary Clinton news here. She and her husband are down in the… It looks like the Virgin Islands, and you know what they’re doing there? There’s a tweet here: “Island nations and territories already bear the brunt of climate change. I’m thrilled to be in the U.S. Virgin Islands this week with @BillClinton and @ClintonGlobal [Initiative] to meet some of the people and programs pioneering strategies for climate resilience.” Climate…? You know what they’re probably doing is setting up another fake cell phone company run by her brothers. 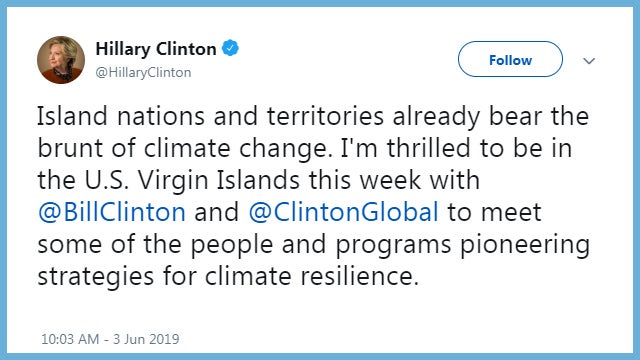 “Yes, we’ve got climate change. Now we must have climate resilience.”

Wait, we don’t have the ability to be resilient! The point about climate change is that we’re powerless to do anything about it other than take our lifestyle back a hundred years. Isn’t that the point of climate? There’s nothing we can do! What do you mean, be resilient to climate change? These people are not for adaptation — and Joe Biden’s on the case now. Grab sound bite number 29. Today in Berlin, New Hampshire (maybe it’s pronounced Berlin), Vice President Bite Me speaking about climate change…

BIDEN: It’s an existential threat we face — and we know, uh, and you know that there are… Uh, they tell us we have not a whole lot of time beginning to change the direction. Now, the first thing I would do day one as president. I’d rejoin the Paris climate accord which we, Barack and I, put together.

RUSH: Classic. It wouldn’t do diddly-squat. “We would rejoin the Paris climate accord.” You know what the dirty little secret here is? It is that no matter where you look, no matter what poll is taken, when people are asked to rank the issues from top to bottom on the level of importance, climate change is way down at the bottom. It’s pretty much the case across all demographics. It’s a little bit higher among Democrats, but even among Democrats it’s not in the top five — and these people are frustrated to no end.

I mean, they have been trying since the 1980s to do what? Essentially, they’re trying to cause a shift in public opinion that would result in the granting of new, expansive powers by the government to levy taxes on certain resources, products, and behavior that the left wants to limit. That’s all climate change is. It’s a way of elevating and promoting large government, liberalism, socialism, or what have you. They’re beyond frustration at their ability to get people to pay attention to it and take it seriously.

I mean, a large number of people. Here again, there’s an intellectual reason why they’re having such trouble. For people my age, my memory of this goes back to the 1980s. I first came across the whole concept of global warming while watching This Week with David Brinkley one Sunday morning. They had some guest on there named Oppenheimer who was some climate change scientist from somewhere — some Northeastern, Ivy League school — and he was sounding the warning bell!

He was painting a picture of doom. “See levels rising! End of the coasts! New York City and Miami gone! Perhaps,” he said, “in 20 years. We’ve got 20 years!” So Brinkley says, “Are you sure about this?” He says, “Well, no, but we can’t afford to not take action in case we’re right.” I began to notice that all the predictions were for 30 years from now, 40 years from now — and they still are. Even the predictions 20 years ago… By now, 1980, that’s 40 years ago. This stuff should have started happening, and it isn’t! 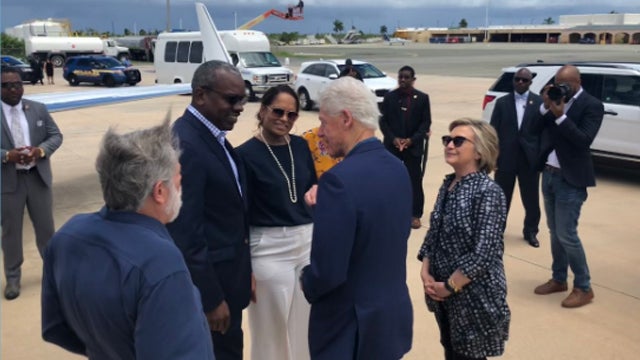 I think one of the problems is that they’ve been crying wolf for so long that there isn’t any evidence of climate change. They try to say this inclement weather here, that inclement weather there, but they just can’t make it stick. Biden… I’m gonna tell you right now: Biden knows that he is uttering pure BS. He knows membership in the Paris accords would not mean a damn thing. All he’s doing is pandering. He’s pandering to the Democrat base, and I don’t know what percentage of them are big on this.

But the fact is they have not been able to sell this, and they’ve worn people down on it now so that they’ve had to get so ridiculous with some of their future predictions. It’s one of the greatest examples of how wrong liberals are and how catastrophic solutions to problems would be if they had the chance to be in charge of the solution. This is a nonexistent problem anyway. The climate’s always changing. The argument we’re responsible for it is absurd. We don’t have that kind of power.

There’s nothing we can do to stop ’em, and then they absurdly come around and say, “Yeah, well, they’re happening because of our SUVs,” or whatever the latest excuse is. And they’ve been crying wolf for so long that they have started boring people, which is why I’m as reluctant as I’ve ever been to actually get into this in great detail because here, ’cause you’ve heard everything I have to say and think about this. But these people keep trying to sell it and as long as they do, we are going to continue to try to knock it down.