RUSH: Here’s something funny. You know, the Democrats — Jerry Nadler and his bunch on the Judiciary Committee that want to impeach Trump — wanted to call Don McGahn, Trump’s lawyer that spoke to Mueller for 30 hours and submitted gazillions of documents. Of course, Trump has told all these people, “You’re not going up there and talking to these people. They don’t get a do-over. So you’re not going.” He told Hope Hicks, “You’re not going. Nobody’s going up there. Nobody’s gonna talk to ’em,” which is the right thing to do. Trump’s already participated in this so-called investigation. So the Democrats, you know what they’re doing? 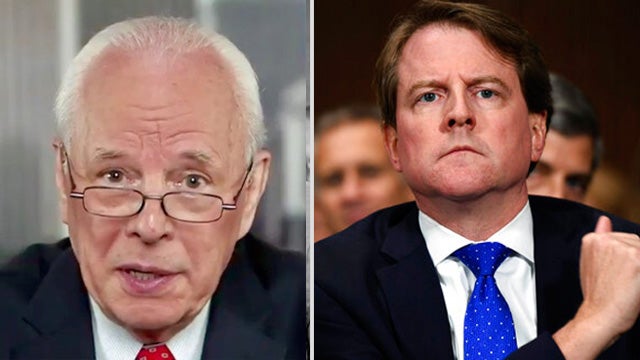 They looked at McGahn. I told you, the Democrats cannot innovate. Everything that’s happened today, they try to fit into something historically. So, in this case, they’re trying to make all of this with Trump into Watergate. So, in that analogy, Don McGahn is John Dean. John Dean turns state’s evidence on Richard Nixon. You had the guys that went in there and revealed the White House tape system, and then they called Dean in there and Dean totally turned on Nixon. So, since they can’t get McGahn, they’re calling John Dean! They’re calling John Dean in to testify. He has nothing. He has no knowledge, nothing whatsoever!

He doesn’t know diddly-squat about what went on in the Trump campaign, the Trump presidency, the Trump White House — and the Democrats know this. You know what they say is the reason why they’re calling him? “Well… Well… You people think it’s crazy, but John Dean understands cover-ups. We’re gonna bring John Dean in here with his expertise in cover-ups to tell us how Trump is doing it,” and John Dean’s gonna go! John Dean is 81 years old — which, you know, is not that much older than Plugs, Plugs Biden.