RUSH: Now, Donald Trump in the United Kingdom. This has been a very bad week — and it’s only Wednesday — for the Drive-By Media worldwide. Remember the story about the dead North Korean officials that were executed? They’re walking around. They’re alive. They are above ground. As we say on the golf course, “They’re on the right side of the grass.” Big, big mistake. Now we found that… Remember the story we had…? I think it was Monday. This is Wednesday, so it was Monday.

The African-American forklift operator who put together the satirical video of Pelosi appearing to slur her words? And we were told that an enterprising journalist called Facebook and ferreted out the truth, and Facebook just divulged (because the reporter wanted to know) the name of the person that did it. It turns out that the media used convicted felons to dox this guy. We were not told the truth about how his identity was learned. 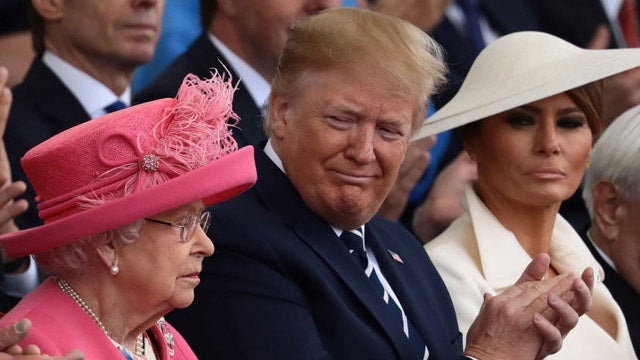 The media has been working overtime to manufacture a spat and a disagreement and a state of dislike between the queen and Donald Trump. And while doing that, they were holding out hope and promoting and warning everybody about massive anti-Trump protests that didn’t happen — and the queen loves Trump! You can see it in the pictures. The queen is charmed by the president and actually asked him to come back to our country as soon as you can, on his departure. You can see it in all the pictures.

She’s not embarrassed of the guy, the typical stuff that the Drive-Bys would want you to believe. (impression) “The queen, the pillar of royalty and elitism, can just barely stand to be in the same room with this ogre.” Not true. Not a word of it. Now, Trump sat down for an interview with Piers Morgan. We have the audio sound bites on this. He knows Piers Morgan. Piers Morgan was… I guess he was a guest on one year of The Apprentice, and Piers Morgan knows Trump pretty well. He won The Apprentice one season.

Trump was talking to him about the hour-long conversation he had with the queen, and Trump said that the queen told him a secret that he swore he would not tell — and Piers Morgan tried to get Trump to divulge the secret and would not do it. The bottom line is, despite the Drive-By Media, Trump nailed this trip. The pictures alone that the average, ordinary American citizen is gonna see nails this trip. 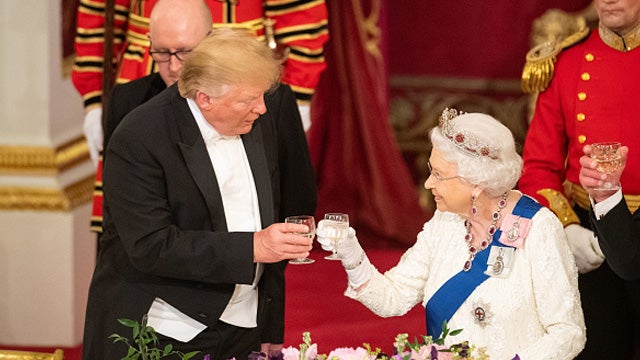 Despite the best efforts of CNN, New York Times, the Washington Post to portray this as something it wasn’t, the queen was utterly charmed by Donald Trump. Melania Trump was an absolute star on this trip. She looked great. Everything she did was the epitome of perfection. She never once showed up… Never mind. It was just fabulous. And the photos of her and the president chatting… There was a dinner. I guess they hosted a dinner last night for Prince Charles and the Duchess of “Cornwallis,” whatever, Camilla, and are waiting for ’em to show up.

And Trump and Melania are standing there like a married couple of many years chatting and laughing with each other and winking and nodding and so forth. It was utterly a completely different picture than what you get from the Drive-By Media. (impression) “Melania can’t wait to get out! Melania’s so embarrassed! Melania worries about her young son growing up with such an ogre.” None of this is true. The British press, as I say, totally flipped and wrote a bunch of positive stuff about this trip.

The American media has done nothing but trash it as much as they can.

RUSH: Yeah. Here it is right here in the U.K. Daily Mail: “‘I hope you come to this country again soon:’ What the Queen told Donald Trump at the end of his state visit as he bid fond farewell to Britain following moving ceremony to salute the heroes of D-Day” 75 years ago. D-Day. You wonder how many young people know about it, what it really was, why it was important. Is it taught anymore?

I’ve been over there twice. I’ve been to the Normandy beaches twice. I’ve been to the cemetery. I’ve been to Pointe du Hoc in France. You see where it happened — and if you have enough information about what happened, it cannot help but move you. The first time I was there was the 50th anniversary. I was there the week after they celebrated it, 25 years ago. It was a moving, moving ceremony that they had. There were even some people still alive who had participated in it, and they were able to participate in the ceremony.

RUSH: Gulfport, Mississippi, and Bob. Great to have you with us, sir. Hello.

CALLER: Good to talk with you, Rush. Mega dittos.

RUSH: Thank you, Bob. Great to have you here with us.

CALLER: Yes. I discovered something in the British cordial reception of our president, and that was that the president knows that the British were involved in the scam to get him thrown out of office. Steele was a British agent. And, you know, they’re never cordial to anyone, not even themselves. Look how they treated Diana and Camilla and all the rest. And here you have a colonial president come over there and they treat him like he’s the king.

RUSH: Let me tell you something about the queen. People have forgotten. Let me interrupt you here. Do you guys remember Trump gave the queen a tremendous gift. I’m having a mental block on what it was, but it was a really, really well-thought-out and researched historically relevant gift. I’ll have to find it. I’m not thinking about the book by James Doolittle. It was something else. And it may have been – no, it was the Japanese emperor. I’m sorry. 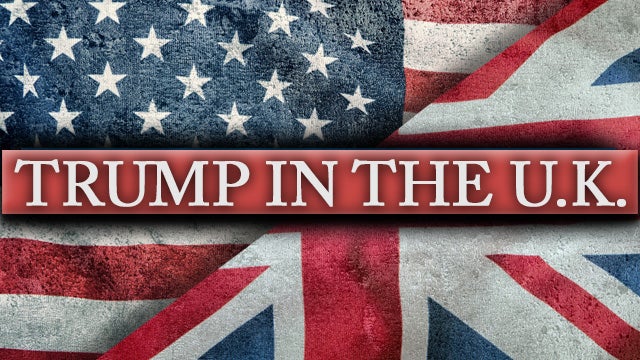 Do you remember what Obama gave the queen? Let me tell you. He gave the queen an iPod with his speeches recorded on it. Now, we don’t know what the queen — we never saw a public reaction. I will guarantee you — well, I can’t guarantee you, but the odds are the queen laughed and looked at the that iPod, said, “Who does this guy think he is?” Because the queen knew that Obama had no love lost for the Brits. The Brits were colonialists, Obama hated colonialists. So you may have a point here, Bob, because Trump was treated with great, great pomp, circumstance, and fanfare.

CALLER: Certainly. You know if I got a new iPhone, that would be wonderful, but the queen is a billionaire. She can buy billions of them.

RUSH: Right. But not with Obama’s speeches.

RUSH: Right. Here’s another thing about that. Don’t think for a moment that Obama’s so lost in his ego that he thinks the queen would be dazzled to listen to his speeches. That’s not what that was. You have to understand Obama. It’s in his book. Dreams From My Father, Nightmares From My Father, whatever it is. Obama had a deep resentment for British colonialism almost as deep as his resentment for American racism, particularly as it related to Africa, India, Kenya.

And I think the gift of a bunch of speeches was really a diss, in a way. He knew she wasn’t gonna listen to his words. But if she did, I guarantee you the first speeches on there would have been what Obama thought of the Brits. Remember the story about removing the bust of Winston Churchill out of the Oval Office? That story went back and forth, true, false. It did get moved. Not out of the White House, but it was moved out of the Oval Office after Obama was inaugurated. Thanks, Bob.

RUSH: I want to update the gift business. One other thing. I was reminded by our old good buddy Seton Motley about Obama’s gift of the iPod filled with his speeches. There was something about that that I forgot. He gave her an American iPod! She didn’t have a way to hook it up. Remember that? At the time, I think… Hang on here, folks, I gotta hit the cough button for just a second. Don’t go anywhere. (coughs) I hit the wrong button! (laughing) I still can’t get any of this stuff straight here.

Anyway, at the time Obama did this… What year was it? I think Apple was still using 30-pin connector. Maybe they had moved to Lightning. Whatever. He didn’t give her… He gave her an American iPod. It’s got a whole different plug and adapter to use, and he didn’t even think to make it usable in the United Kingdom. So (chuckles) you can’t just take that to the Apple store and exchange it ’cause it’s got Obama’s speeches on it.

Now, the gift that I was thinking about was the gift that Trump gave the emperor of Japan, Naruhito. He presented it. This guy plays the viola (or the vee-oh-lah), and he gave the emperor a 1938, handmade — American made in Charleston, West Virginia — viola. Also presented him a signed photo of the great American composer, Aaron Copland. “Trump gave the queen a silver and silk poppy brooch from Tiffany & Co. in a custom wood White House jewelry box… 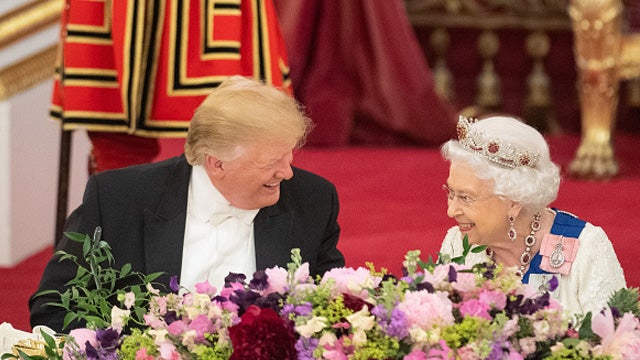 “The poppy symbolizes remembrance for those who died in World War I, though the White House could have chosen the gift for the 75th anniversary of D-Day on Thursday.” He may have had done it for that reason which, as you know, is tomorrow. “Prince Philip,” the husband of the queen — who is not doing well, folks. These people have remarkable longevity, but nevertheless, Prince Philip is not doing well. “Prince Philip received a personalized Air Force One jacket as well as a first-edition, signed copy of World War II aviator James Doolittle’s autobiography, I Could Never Be So Lucky Again.

“The gifts pointed to the fact that Prince Philip was a pilot and served in World War II, according to Town & Country. According to [Town & Country magazine], these official gift exchanges require consultation with the State Department. The first lady’s spokeswoman Stephanie Grisham told CNN Melania Trump was ‘very involved with the gift selection,’ alongside the State Department.” So I wanted to get all of that straight.