Recalling My Trip to Normandy

RUSH: Back in 2013, I had just returned from a trip to France and to the Normandy beaches. And rather than reflect, I’m just gonna replay my comments from that day. Actually, it was June 5th. It was actually the same day, six years ago, as yesterday, 2013.

RUSH: The whole D-Day invasion, particularly Omaha Beach and Pointe du Hoc, have mesmerized me. I’ve been immersed in them, and I’ve learned so much just in the last number of years as celebrations have taken place, things I didn’t know when I thought I knew it all. A grand act of deception. The Germans weren’t sure where in Normandy, all along the northern coast of France, the Allied invasion was going to take place. They weren’t sure when. It was a tremendous — without getting into great detail in this, Eisenhower and his command had done a terrific job in deception building fake installations along the beach to indicate they were coming there, or training in fake locations. 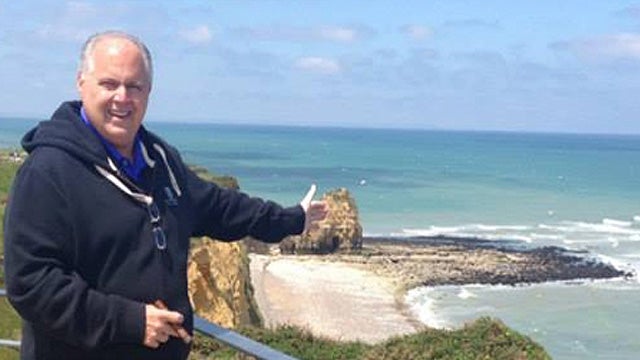 The Germans even suspected that the invasion might hit Norway and not France. The deception was so good that the German commander Rommel wasn’t even on site on D-Day. He was taking a couple days off. I think it was his anniversary. He was with his wife in Paris or back in Germany or something, and he had a phone call early in the morning, “Guess what, General? We’re under assault here.” It was a tremendous… And even with that act of deception, the number of Americans who were killed, Allied forces killed, is stunning. Two hundred thousand, part of the invasion all along the north coast of France, and its importance — that and the Battle of the Bulge — I mean, was crucial to stopping what was happening in Europe and preserving Europe and the rest of the world for freedom.

But these Americans along Omaha, all the way down, Juno Beach, Utah Beach, Pointe du Hoc, they were sitting ducks. German installations were high up on the hills. There were bombing runs. In the case of Pointe du Hoc, I think the 9th Army Air Force was launching bombing runs and the number of seagoing efforts to assist in the ground assault which was conducted by the Rangers 2nd Battalion.

Now, this was my first time at Pointe du Hoc. I’d been to this place in my mind but I’d never seen it other than in pictures. It’s a hundred-plus feet straight up. The Rangers land on the beach. Ships launch ladders and other things on the sides of the cliff to assist the Rangers in climbing up. The Germans are shooting down on them, and the Rangers just kept going. Big guns, 155-millimeter guns were up there. They just kept climbing even as the Germans were mowing them down. 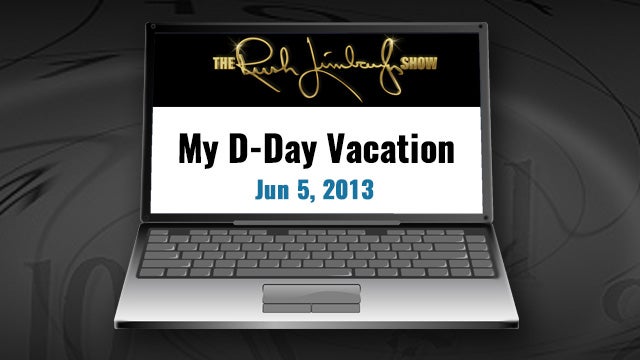 Now, one thing: The Germans, because of deception, thought that Utah Beach was gonna be the focus and they had moved many of the gun installations at Pointe du Hoc a mile west of Pointe du Hoc. They still had some guns but the big guns had been moved on the orders of Rommel. Interestingly, the Ranger rank-and-file landing on the beach and climbing the cliff, they were not told. The Ranger leadership knew that the guns had been moved.

But to see it, folks, so pristine and peaceful now, and to see what these Americans did. I mean, climbing straight up those cliffs with ropes, makeshift ladders, with the Germans firing down on them! Even though the bulk of the guns had been moved, there was still German small arms fire that was raining down on them, enough to kill them — and a lot were killed. That location, I think, was one of Ronald Reagan’s greatest ever speeches as president, The Boys of Pointe du Hoc. He gave that speech on the fortieth anniversary of D-Day.

They’ll do something big next year for the seventieth. But it’s just another reminder for us about the greatness of the US military and the people. They’re all volunteers back then, too. Not all, but quite a few — and the Rangers, the equivalent of the Special Forces in their own way. You can’t go there and have any knowledge at all of what happened to not be in awe of what happened, and you can’t go there and not just be thankful. 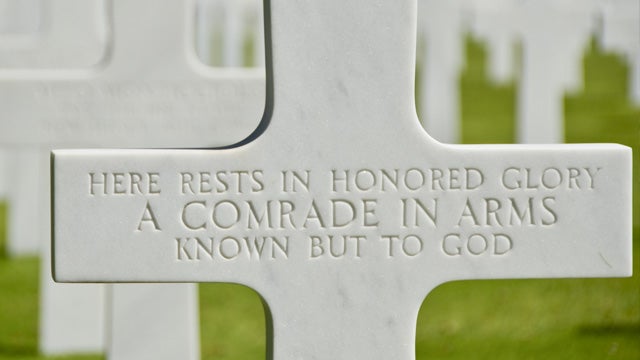 And I’m telling you, as you get older… At least for me, getting older, I become more and more in awe and in appreciation. The appreciation just increases and increases for what people did. And then you see the names on the crosses in the cemetery, and you see 18- to 28-year-olds, 10,000 of them. They used to be alive, ’til that day or the day of their death. It runs the gamut in that cemetery, but it’s still quite a sobering thought. So I just wanted to share with you the really momentous time that it was.

RUSH: It is someplace every American ought to try to learn about. If you ever get a chance to go there, you really should. And Pointe du Hoc is a big deal to me because of what happened, but all of the Normandy beaches were important and crucial. But Americans should never forget what happened. Even though that kind of warfare will never, ever happen again, the fact that it did…

It’s recorded in history that we won and so that’s all good. But, man, it was one of the most amazing achievements. It’s why it is celebrated every year and on the big years like 50, 75, everybody goes all out. So if you ever have chance, if you find yourself anywhere in France, you ought to make an effort to go up to Normandy. It’s beautiful there anyway, despite the historical aspects.