RUSH: Now, I mentioned way back in the first hour of the program when I talked about Pelosi wanting Trump in jail — and, by the way, I’d love to go back through that, but I’m not gonna do that. You can see what I said about that. It’s important. RushLimbaugh.com. You can get the RushLimbaugh.com app — which is just fabulous, by the way, folks. We’re working on an Apple TV app. Well, we’re in the design stages of this, so it’s not imminent. But I finally got the ball rolling on it for RushLimbaugh.com, the app.

Look, I got an email from a friend of mine who’s touring. He’s taking a bunch of people on a tour in Greece. This guy is an expert on the Peloponnesian War era, and he says, “It’s really tough, Rush. I can’t find you here in Greece. I’ve been able to find your show in some parts of Europe but I can’t find it in Greece,” and I said, “Get the app! Get the app and you’ll be able to listen to it wherever you want.” “I didn’t even think of that.” So, he got the app, he logged in there, and even in Greece, he’s able to listen to the program.

Anyway, the idea that Pelosi wants Trump in jail — and Politico has an accompanying story today about how that can happen after Trump leaves office, which is what Pelosi’s talking about. She’s trying to stave off her party that wants to impeach Trump. So she goes out there and says, “I don’t want him impeached. I want him in jail.” She’s trying to get them to accept that, because she knows impeachment is not good politically.

But in addition to their base voters that she’s trying to keep in check, she’s also trying to keep committee chairmen from going off the deep end on this like our old buddy Jerry Nadler. So, Jerry Nadler’s on CNN last night, and Wolf Blitzer is begging him to stop delaying and get started with it, and I wanted you to hear the sound bites. It’s three bites of Jerry Nadler on The Situation Room with Wolf Blitzer. The question: “First off, Mr. Chairman, are you feeling any pressure from your members to at least open an impeachment inquiry?” 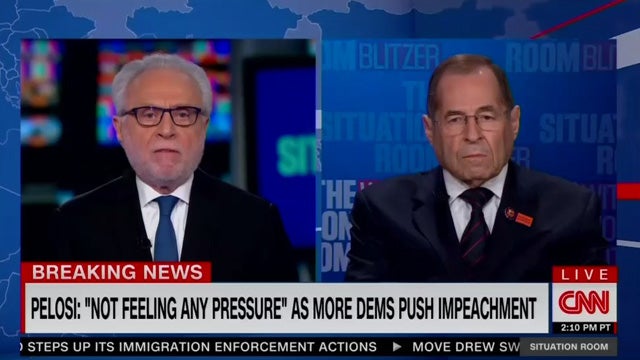 RUSH: Now, remember, Pelosi had to go out yesterday for press briefing and remind people (laughing) that impeachment is not Hillary Clinton being made president. If you impeach Trump, it doesn’t mean he’s gone. It’s just an indictment. (laughing) I guarantee you there’s a lot of Democrats that do believe that if Trump is impeached, it means Hillary is the president. That’s what they think impeachment is. “Oh, this guy is disqualified because he cheated with the Russians? It means Hillary is president!”

That’s why they wanted it to happen. So here’s Nadler, and he’s talking to Wolf Blitzer about an impeachment inquiry, and Wolf is nuts about it. “What do you mean, ‘inquire’? You don’t have to inquire about anything! Just start with the impeachment!” Nadler says, “No, we have to do the inquiry. It’s a formal the inquiry into whether we could prove the president did impeachable things.” (sputtering) “W-w-w-well, why — why waste that stage? Just — just go for it!”

Here’s Wolf basically trying to get Nadler to get off the dime. It is funny.

BLITZER: Mr. Chairman, why not open the formal inquiry?

NADLER: As I said, it may come to that.

BLITZER: But — but why not now! Uh, what’s the problem if you start it right now and you begin the process? You’re gonna go ahead with investigations to begin with!

NADLER: Well, right now there doesn’t appear to be the support for it.

BLITZER: If you opened a formal inquiry, wouldn’t that give you better access to witnesses, to documents? Wouldn’t you have a better case to make?

NADLER: In certain instances, it would give us… Uh, it might give us better case… better, uh, access. Uh, and the lawyers argue about the — the extent of that.

RUSH: Nadler doesn’t… Jerry Nadler? You talk about Trump being just a real estate developer from Queens? What is Nadler? (Snort!) I mean, if you’re gonna start characterizing Trump as insignificant ’cause he’s “just a real estate developer from Queens,” this guy Nadler… He’s just a walking left-wing robot. He only knows robotically what liberalism is, and he spews it out and spouts off about it. “Civil liberties, civil rights,” all this stuff, not even understanding it.

“You get the message across there, Jerry. If you want to stay chairman of this committee, you get the message out of there that we’re not gonna do it right now. We can’t do it right now.” Here Blitzer wants it done! CNN wants Trump impeached, and Nadler’s gotta try to give him all of the reasons that Wolf supposedly doesn’t understand why they can’t do it. But Wolf is not ready to give up.

BLITZER: Are you on the same page with the speaker, Nancy Pelosi, when it comes to impeachment?

BLITZER: Well, uh, is there any chance, Mr. Chairman, you would open up an impeachment inquiry without Speaker Pelosi’s support?

NADLER: When that decision has to be made, it will be made not by any one individual. It will be made by the — probably by the caucus as a whole. Certainly, uh, Nancy will have the largest single voice in it, uh, various committee chairmans (sic), and rank-and-file members.

BLITZER: And you’re not there yet, uh, but it’s potentially, uh, over the horizon.

RUSH: (impression) “They’re not there yet, damn it! But it’s on the horizon. We can see it! Oh, my God. We gotta do it.” “As I said, we’re launching an inquiry now. Whether we launch an impeachment inquiry…” “Wait, no! You just said you are launching an inquiry.” “What! When you get…?” I can kind of understand Wolf’s frustration. “Impeachment inquiry? You gonna investigate to see if you should investigate? You’re gonna inquiry to see if you should inquiry?” When you’ve got a guy like Wolf who wants Trump gone tomorrow, this seems like a totally waste of time.

And from what I understand, by the way, Nadler wants to go full-speed ahead with this anyway and Pelosi is telling him he can’t. Supposedly, there are big arguments going on between Pelosi and her committee chairmen over this, and particularly Nadler. She really is in a precarious spot here and could end up losing control of it. You heard Wolf Blitzer. “Could you do this even if she doesn’t want you to do it?” Because that’s where this is headed.