RUSH: It’s a Breitbart story. “Top Execs of 180 Companies: Abortion Necessary to Be Successful in Business — ‘When everyone is empowered to succeed, our companies, our communities and our economy are better for it,’ the executives say in the letter posted on a newly launched website titled ‘Don’t Ban Equality.'”

This is their reaction to the various moves in states to make abortion much more difficult to achieve after… Again, this is reactive. This is not the subject of attacks. I mean, what do they think is gonna happen when people in New York and Virginia give a standing ovation to the idea of killing a baby after it’s been born? That gets a standing ovation! The lights of a city are turned a specific color to honor it. What do they think is gonna happen?

I guess they think everybody agrees with them on abortion too. So now that it’s becoming more difficult, here comes small-business people… Well, no. Not small business. They’re top executives of 180 companies saying (summarized), “We gotta have abortion. Abortion is necessary for us to be successful!” Here’s more from the letter they posted. “Restricting access to comprehensive reproductive care, including abortion, threatens the health, independence and economic stability of our employees and customers. Simply put, [not having abortions] goes against our values and is bad for business.”

“It [promotes] our ability to build diverse and inclusive workforce pipelines, recruit top talent across the states, and protect the well-being of all the people who keep our businesses thriving day in and out” by killing future customers. Uh, no! We didn’t mean to say that. Okay. So I have an idea. We try to be helpful here at the EIB Network. We try to join the crowd. We trying to be instructive. We try to show that we can be cooperative. So I have a new business plan I would like to propose to these 180 top execs.

Partner with Planned Parenthood, ’cause they’re behind this deal anyway. Partner with Planned Parenthood and open mobile abortion clinics, like ice cream trucks. Instead of ice cream trucks, have mobile abortion trucks traveling from campus to campus. Ring the bell when the abortion truck arrives. “Ding-ding! Ding-ding! Ding-ding!” If you want an abortion, ask for a little half hour off and go down to the abortion truck provided by the company, paid for jointly about by these 180 companies, and have at it — and then start promoting all the values that you have just touted.

“…a build diverse and inclusive workforce … recruit top talent across the states, and protect the well-being of all the people who” (Ahem! Ahem!) have been born and “keep our businesses thriving day in and out.” You could pull the abortion truck right up to the curb around lunchtime. In fact, you wouldn’t even have to give people any time off. Pull the abortion truck of up once a week, twice, every day depending on how many values you want to promote per day. So bring the abortion truck in there! 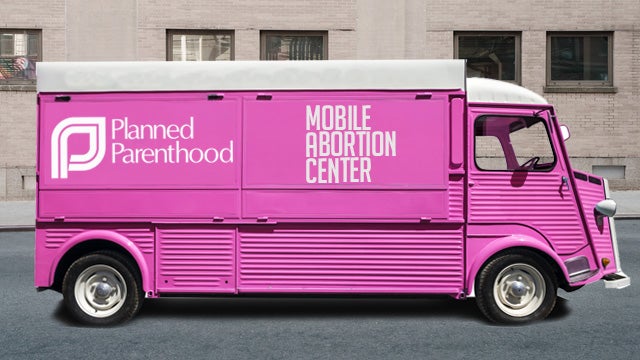 “Ding-ding! Ding-ding!” Mobile health clinic or what have you. Women could pop in there, get this little pesky problem dealt with, maybe have a taco. The other side of the truck could be selling tacos or ice cream, and you’re back in the assembly line in, what? An hour. See, this is how we at the EIB Network help. This is how we see a problem and try to join the solution to it, and this is how these “180 top executives” can then promote their “values.” Now, maybe you wouldn’t want to actually label it the Abortion Truck, Mobile-Abortion Center. Maybe you wouldn’t want to do that.

Call it the Freedom Van!

Well (laughing), if you call it the Abortion Truck somebody’s gonna go out there throw tomatoes at it be with you know that’s gonna happen. It’ll become a target. Call the Freedom Van. Call it the Emancipation Vehicle. Call it the Promote Our Values Fleet and have it just go between every one of these 180 different companies, the Promote Our Values fleet! It can maybe go to the loading dock for private entry and exit rather than the front door. Depends on how much you want to promote your values. If you really want to promote your values, the abortion truck shows up right there in the front parking lot. If you want to kind of hide the values and make it just an end result ’cause you don’t want to see the sausage being made (ahem), drive it to the loading dock.

This is how we at the EIB Network seek ways to cooperate and further the notion of all Americans coming together as one to promote our values so that what we do is not bad for our business. We’ll deal with the fact that there are gonna be fewer customers later. By that time it’s all gonna be robotic anyway and we won’t have to sweat it.