Have You Taken a Look at Drudge Lately?

RUSH: I was perusing the Drudge page over the top of the hour break.

Man, the Drudge page. Depending on the time you look at it, I mean, it makes it look like this country’s finished, we’re done, it’s over. You may as well forget about it and just enjoy your life. Well, let me give an example. Let me just give you these headlines. Ready? “U.S. Cities Overwhelmed with Illegals from Ebola Countries.” (Snort!) Do you know what Ebola is? If you’ve got it, you’re dead. There’s no cure for Ebola, particularly if it’s Ebola Zaire. You get that, and it’s, “Sayonara.” There isn’t any cure.

Now the U.S. is “Overwhelmed with Illegals from Ebola Countries.” Not that they have Ebola, but who’s gonna stop and make that distinction? Next headline: “Not Being Screened, Not Being Quarantined.” (laughing) “California Desert Town Sees Migrant Surge as Crisis Worsens.” “Nonstop Dumping: ‘New Phenomenon.'” “Crawling Out of Manholes in El Paso.” The illegals are in the sewer system and they’re popping up out of manhole covers in El Paso, folks — and there’s nothing anybody can do about it. 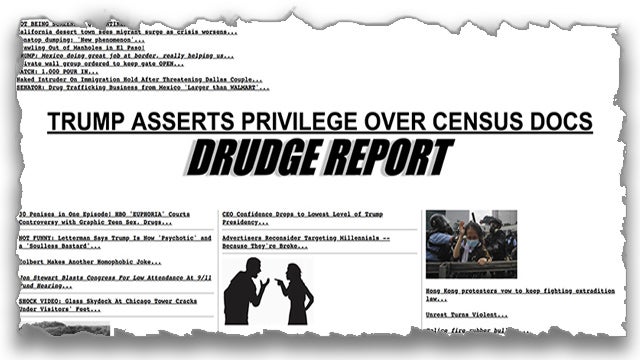 “Trump: Mexico Doing Great Job at Border, Really Helping Us.” Now, Drudge puts that under those four headlines that we’re being overrun by Ebola, and illegals are swarming El Paso through manhole covers. Next headline: “Private Wall Group Ordered to Keep Gate Open.” (laughing) So got this guy that is running a GoFundMe page to get money to build the wall and building the wall and somebody’s telling him he can’t close it. (laughing)

I know it is not a laughing matter. I’m just… I’m laughing at the… Somebody landing from Mars and looking at the Drudge page today is gonna ask themselves why they came. Let’s see. This is a video. “Watch: 1,000 Pour in Through Open Gate in Wall.” “Naked Intruder on Immigration Hold After Threatening Dallas Couple.” “Senator: Drug-Trafficking Business from Mexico ‘Larger than Walmart.’” Here’s the next headline: “30 Penises in One Episode: HBO Euphoria Courts Controversy with Graphic Teenage Sex and Drugs.”

Have you heard about this show? It’s a Sunday night show coming on HBO called Euphoria, and it’s about teenage sex, drugs, rock ‘n’ roll — and they have 30 penises in one episode. That’s how much frontal nudity. “Not Funny: Letterman Says Trump Is Now ‘Psychotic’ and a ‘Soulless Bastard.‘” “Colbert Makes Another Homophobic Joke.” (laughs) “Jon Stewart Blasts Congress for Low Attendance at 9/11 Fund Hearing.” “Shock Video: Glass Sky Deck at Chicago Tower Cracks Under Visitors’ Feet.” I mean, everything is falling apart.

Here’s more: “CEO Confidence Drops to Lowest Level of Trump Presidency.” “Advertisers Reconsider Targeting Millennials Because They’re Broke.” (laughing) Advertisers are gonna give up trying to get Millennials to buy anything because they’re broke. “USA Ranked 128th Most Peaceful Nation.” “More Than 200 Dogs Rescued from Nightmare House, Dozens Dead.” “Tech Insider Blows Whistle on How Pinterest Listed Top Pro-Life Site…” Oh, this is an O’Keefe story. This is Project Veritas. 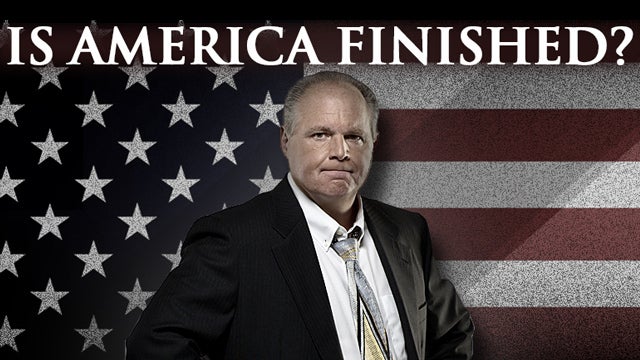 This is actually fascinating. They got a whistleblower, they got somebody inside Pinterest, and you know what Pinterest was doing? They were listing the top pro-life site as pornography and not allowing people to access it, just for starters. So, anyway, it was the “Advertisers Reconsider Targeting Millennials Because They’re Broke” that I focused on. But all that other stuff, you go through it and you wonder how in the world…? How are we functioning every day with all of this stuff?

Folks, that’s just the top half of the page. I didn’t even print the bottom half because I didn’t see anything. I was looking for the, “Advertisers Reconsider Targeting Millennials Because They’re Broke.”