RUSH: Here’s Paula in Cincinnati as we head back to the phones. I’m glad you called. Hi.

CALLER: Hey, Rush. I just want to thank you for the daily dose of logic.

RUSH: Well, I appreciate that. Thank you. You’re more than welcome.

CALLER: (chuckles) That’s why I tune in. You keep me from getting too close to the ledges here. I’ve wanted to comment on something that Kirsten Gillibrand said yesterday. 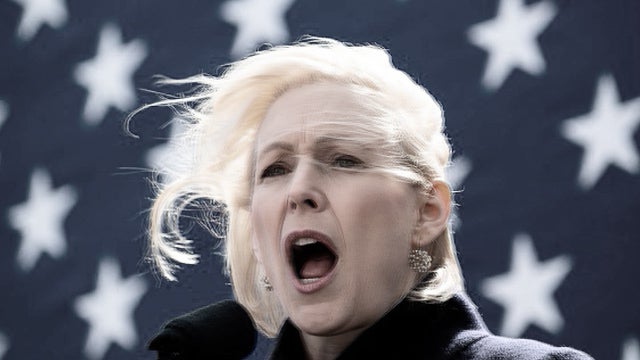 CALLER: — all the presidential candidates out there. I think somebody ought to remind her that while she’s trying to call pro-lifers racists… Someone really ought to remind her that the abortion industry queen, Margaret Sanger, was actually a racist. That these abortion clinics were basically placed, if you look around, in predominantly black neighborhoods for the sole purpose of eliminating the African-American race. So, in her logic, the pro-lifers who want to protect and save all babies regardless of race, she’s calling them the racists.

RUSH: Exactly right. It’ll never happen, but I’m glad you reminded me of this. I had two different versions of the Kirsten Gillibrand story, and I thought I printed them out, but I must not have. You know that she’s sitting there… In all of these polls that everybody’s touting, you know what her percentage is in these polls?

RUSH: No. It’s less than that.

RUSH: It is zero. She has literally no support. So she’s in a situation where she has to get noticed, and like every liberal Democrat (tack on “woman” to that), she thinks abortion is the way to get noticed, the way to let somebody know you’re on their side. So she… I wish I had the story in front of me because what she said is really outrageous, and I don’t want to have to paraphrase it.

So I have to find it during a break. But what she said about this, what she called people who believe in pro-life, what she called ’em racist or… It’s worse than that, what she said. Your point about Margaret Sanger and eugenics is exactly right! And Planned Parenthood. And it’s working, by the way. You ought to see the percentages of by race of women who are having abortions.

RUSH: Well, gotta be careful when you start bringing Hitler in. Even though you may be right, it really serves to discredit your argument —

RUSH: — no matter how right you are, ’cause people just don’t want to believe it. “Hitler? Come on! She’s not Hitler. Kirsten Gillibrand may be dumb, and she may be flailing away, but she’s not the mustachioed dictator.”

CALLER: Oh, no, I’m not calling her that. I was relating the historical reference to what Margaret Sanger was doing to abortion.

RUSH: Hey, look, I told the story earlier in the week. I tried to make that connection at the 92nd Street Y, and it didn’t work there, either.

CALLER: Okay. Well, if you can’t make it work, I’m never going to.

RUSH: I got booed. I got, “How dare you!” But the connection is undeniable.

RUSH: I told the crowd the 92nd Street Y, “If you ask me, if anybody ought to be really scared about what’s happening with abortion, it would be you in this audience.” Man, if they had tomatoes, they would have thrown ’em at me.

RUSH: Let me see here. Look, I’m glad you called. I’m gonna find the Gillibrand thing. Let’s see. “Gillibrand Compares Pro-Life Viewpoint to Racism, Suggests that Pro-Life Beliefs Are Not Acceptable.” That’s what it was. She “compared pro-life beliefs to racism and suggested the pro-life viewpoint is not acceptable during an interview with the Des Moines Register. Gillibrand’s comments came in response to a question about if having a litmus test for judicial nominees would threaten judicial independence.”

That’s where I knew I had seen it. We have her saying it. We have audio sound bite number 22. Here we go. Go ahead and run it in three, two, one…

GILLIBRAND: I think there’s some issues that are — have such moral clarity that we have, as a society, decided that the other side is not acceptable. Imagine saying that it’s okay to appoint a judge who’s racist or anti-Semitic or homophobic. Telling… Asking someone to appoint someone who takes away basic human rights of any group of people in America, I think that we are… We’ve… I don’t think those are political issues anymore.

As a presidential candidate on your resume, you may really qualify as a commentator on a cable news network, for example. If you make a couple of debates, you could become a commentator. You might be on some board of directors because you’re run for president. There’s a lot of reasons for doing it now, but she ought to… She doesn’t have a prayer of being elected; so there’s something else going on here.

And it just may be that she’s in trouble for her next Senate bid. I don’t know. But this… (interruption) I don’t believe that. Snerdley is telling me that she thought she was gonna ride the #MeToo thing all the way to the White House. If she really thought that, if she really thought that she… You know, Clint Eastwood said it in one of the Dirty Harry movies after he murdered a bad guy, “A man’s got to know his limitations.”

You know something? That flies in the face of, “If you think you can do it, go for it, and once you start, never give up, never quit, never give up.” Churchill’s quoted all the time “never, ever give up.” And then there’s Dirty Harry, “A man’s gotta know his limitations.” That’s also true. You gotta know what you can and can’t do. You waste your time otherwise. I mean, I can give countless examples.

You know you can’t play golf well enough to earn a living doing it, so don’t even try. Just play it to enjoy the game. But if you know you don’t have that talent, you’re wasting your time trying. There’s nothing virtuous in wasting your time. Man’s got to know his limitations. On the other hand, no, man, go for it, give it everything you got. You think you can do it, go for it.

But there was no way she was gonna ride the #MeToo movement anywhere, as evidenced by the fact that she is nowhere. She’s at zero in the polls. Now, look at this. “I think there’s some issues that have such moral clarity.” Moral clarity that involves killing babies.

“Some issues have such moral clarity that we as a society decided the other side is not acceptable.” So being one who wants to support and defend human life is not acceptable in her world. In other words, the morality is so decisive in the pro-abortion sense that opposition to it is just not even acceptable. So we don’t even debate it, we don’t even allow you to have that opinion, you are so immoral.

Now, here’s Trump. He was in West Des Moines last night at a Republican Party America First dinner. This is what he said about it.

THE PRESIDENT: Virtually every top Democrat in the country now supports taxpayer funded abortion, right up until birth. And how about in Virginia, where we’re not talking about up until birth, but the governor of Virginia said after birth! The baby is born, and you gently wrap the baby and then you talk to the mother, and maybe the father, and determine whether or not you’re going to execute the baby. This baby is born. And this is what they want. Republicans believe that every life is a sacred gift from God.

RUSH: Thirty seconds of applause here, 30 seconds. Now, you contrast that with what you just heard Kirsten Gillibrand say. And why is one of the two sitting at zero in the polls?

RUSH: Anyway, Paula, thanks for reminding me about Gillibrand.