Fed Up Friday: Organizing My Stacks of Stuff and the Democrat Debates

RUSH: Randy in Greenville, South Carolina. I’m glad you called, sir. Great to have you with us.

CALLER: How thick — on a normal day, average day — is the Stack of Stuff?

CALLER: Also, if you’re a tech guy, why the paper? I think it’s just so you can rustle it and say, “In my formerly nicotine-stained fingers…”

RUSH: Let me ask you, does the rustling of the paper irritate you?

CALLER: Oh, no, sir, not at all. I enjoy it, because I know you’re a radio guy, and you do that kind of radio stuff. 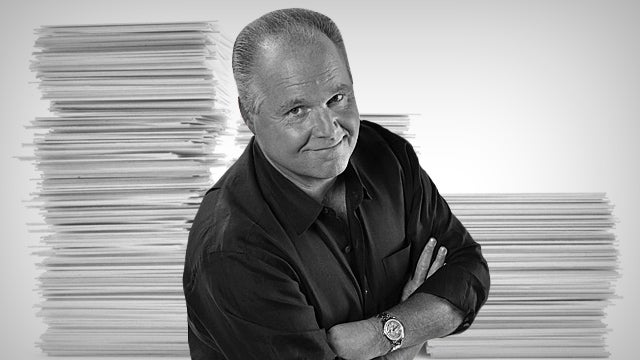 RUSH: Okay. Well, in the case of rustling the paper going through Stacks of Stuff, that’s inadvertent; that’s unavoidable. But when I say I’m headlining something in my formerly nicotine-stained fingers (shuffling) like that, it’s purposeful. I’ve tried to do this. I would need at least 10 laptop screens in front of me if I were gonna do this with tech. I have to rattle through things much faster. I just could not use a computer while looking for things as quickly as I can find them, as I have printed ’em out. I’ve tried it. I’ve tried it both ways.

Now, I have four different stacks every day, after I have begun to organize them around 11:30. The printer is printed to starting the night before at home when I’m doing prep there. So I’m printing to it all night. When I print something, I forget it. I read something, I’m looking at it, “Ooh, that sounds good; I’m interested in it.” I print it to the printer at the studio; forget it. That goes on ’til about 1 o’clock in the morning. It’ll start at 7 o’clock at night. You know, I take an hour off here, there. But that’s basically that. Then Snerdley is looking at various aspects of the website.

He brings a stack in about 11:30. Anyway, at 11:30 I grab everything that I have found since the night before in front of me and I start going through it and remembering what I’ve had, one page per story. I don’t… If something prints out to four pages, the other three pages go to the trash. One page per story ’cause I end up with about 45 to 50 pages in each Stack. So there’s 200 pieces of paper here on my desk at the beginning of every show — and that doesn’t count the stuff that starts coming in as the show happens.

News is made now — it breaks — all the time, and that does not include it. The audio sound bites, Cookie sends me that roster at 11:45 and I find out what’s on that, sound bite-wise that we have. Which means I then have to take that and try to coordinate that with other things I’ve already put in various stacks so that there’s some semblance of chronology to it all. And then I have countless little helpers who, during the program, will say, “Rush, look at this link,” and it’s a computer link.

I don’t have time to open the link, reformat it, look at it, read it, and digest it. But I try to do as much of that as I can because staying on top of things never stops. And there are continually new audio sound bites piling in during the program as newsmakers are out there making news. So, I’ll tell you: It’s just a fluid, fluid process. And if I could do this on a screen with ease, I would, and I’ve tried it. It just… (interruption) Well, yeah. (laughing) Snerdley is saying, “Get six of his those new Mac monitors, those 32-inch babies.” It’s not that. It’s a matter of finding things.

I would have to find a way to open them all on each monitor and put them in certain order, and then make sure they stay in that order as I go through and use them. That would require the use of a keyboard, which you would hear me clacking. You think the rustling of papers is bad? Wait ’til you hear me using a keyboard as I go through things. And that’s just a gigantic distraction. So what I really basically have to do, ’cause I can’t find everything the moment I want it. It’s not possible with 200 pieces of paper here.

I have to read all this stuff over and over so that I basically know it so that if I decide to bring it up, I can tell you about it without having to find the darn piece of paper it’s on. So this is why — and you know how many of those 200 pages I use every day? (laughing) Maybe 30 tops. So every day, I leave here with 130 things I didn’t get to, and it drives me nuts. But then I have to stop and tell myself that you don’t even know that, unless I make the mistake of telling you. So there just isn’t time to get it all in.

Now, today, actually, is a very light day. And you know why? ‘Cause I’m so ticked off, I’m so fed up with certain things, I’m tired of talking about them. So today, I had to go out and search for things that were unrelated. I’m kind of criticizing the media, I’m tired of telling people what’s happened on CNN, I’m tired of this collusion stuff. I’m tired of it. If people haven’t gotten it by now, they’re not gonna get it. I’m tired of being on defense. I’m tired of this reacting to everything Drive-Bys do each and every day. 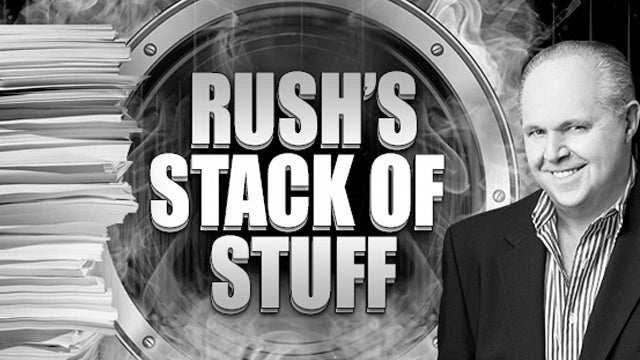 And those days don’t happen very much, but today I was just tired. I told Snerdley when the show started, “You’d better get a lot of calls and keep ’em coming, ’cause I’m fed up today with what I’ve got in the stacks.” But see, you wouldn’t even know that if I hadn’t told you, ’cause this has been a great show. But you would have never known that before it started, I thought it was gonna suck. But now you do since I’ve told you.

Okay. Snerdley is asking me if the Democrats are already engaging in the elimination process by putting the no-chances, the ne’er-do-wells and the no-prayers on the first night and the people that the Democrats think have a chance of winning on the second night?

They’re gonna put the Hickenloopers and the Bottombuppers and whatever on the first night, get rid of them soon as they can so they’re left with what they think is their A-Team. There’s no question. Why do you think they had the debates on Saturday night in 2016? ‘Cause it was already done. Hillary was the nominee. They didn’t want anybody to see how bad she was. They didn’t want anybody seeing how much better Bernie was in the debate format than she was, so put it on a Saturday night when people are watching All in the Family reruns. Anything but the Democrat National Committee debates.

But Trump has a big advantage, any incumbent would be, ’cause he’s not being primaried, so there’s no Republican he needs to spend any money or time on. He can devote every bit of his campaign energy to destroying the Democrats. But they can’t yet.

Now, Biden and Bernie are trying to do that in a sense. Biden and Bernie are trying to pretend they’ve already got nomination and they’re not wasting time and they’re even talking about it. I’m not gonna waste time attacking my fellow Democrats. I know I’m the nominee, we’re gonna go ahead, we’re gonna hit Trump. Because they think that’s what their base wants.

So a couple of them have strategerized that it may make more sense just to assume and have everybody else assume they are the nominee and start attacking Trump from that standpoint, but they haven’t won the nomination yet. Once they do that, once they start ignoring other Democrats it opens the door for other Democrats who are not being hit.

So along comes Kamala Harris or Beto, whoever the hell the rest of them are, and they can start attacking Biden and they can start attacking Crazy Bernie. And Crazy Bernie and Elizabeth Warren and the rest are going after Trump, which also could benefit Trump because after a while I think people are gonna get worn out and tired of that too. I mean, how much is there left to say about how much you hate Donald Trump?

It’s like I think Biden. This is a great example. Poor Joe. He’s run out of things to talk about it. The Democrats have given everything away. Every Democrat’s promising free health care, free education, free life, free job, free sex, free condoms, free contraception, free abortions. The Democrats, before Biden had even come along, have given away everything.

So what’s Joe gonna do? What’s Joe got to give? So Joe starts plagiarizing people. That’s all he can do, because there’s nothing left for the Democrats to give away. They’ve already said they’re gonna give away everything. What’s Joe got? So Joe is gonna go after Trump.

I mean, once the communists get in gear, as the Democrats have, the socialists get in gear, and once they’ve let it be known that everything in life is free, if you like them, if you’re Biden, who’s a late arrival to this, what is there for him to say, “I’m gonna give”? He’s got nothing left to give. I’m gonna make sure everybody wants a free hair transplant gets one? What’s he got? He’s got nothing. Democrats have given away everything. So Joe has to go a completely different way.

The people at the Democrat National Committee convention, they cheered. “All right.” You talk about false hope and misleading, John Kerry is gonna make paraplegics and quadriplegics walk again? Or just Christopher Reeve? Which is it? Yeah, Plugs had to cure cancer. Nothing else left to do. And of course Nixon beat him to that, still haven’t cured it, but he’s not the first politician to come along and say — I mean, Clinton was gonna do it.

I think every president at some point says, “We need to spend money on curing cancer.” “Yay.” Everybody cheers like they’ve never heard it before.