Is Anybody Ticked Off That Trump Flip-Flopped on Calling the FBI? 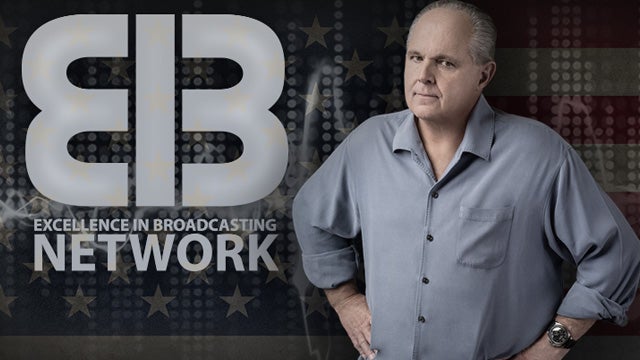 I mean, this cascade here is never-ending, and Victor Davis Hanson last night was on Fox News with Laura Ingraham, and said that the investigation of the investigation probably isn’t gonna get done until 2020, and he probably is right about that. But, still, we’re in a race against time.

Now McCabe is back to life. Andrew McCabe, who should be shamed to the point of hiding, is now back on TV saying (paraphrasing), “See? We were right! Trump is an existential threat. Trump is a danger. He’s not qualified to analyze information that he gets from foreigners. It takes the professionals like us.” And James Clapper is out saying the same thing.

So McCabe’s all over CNN saying (paraphrasing), “This is why we were doing what we were doing because this guy Trump says he would take anything from anybody.” Except Trump’s out there saying that he wouldn’t now, that he would phone it in to the FBI if he received data.

Meanwhile, what is so damn frustrating, Trump hasn’t done anything! Everybody else did! It remains the fact that Trump didn’t do anything! All of this about Trump is what if, what would, all of it is hypotheticals. But with the Hillary Clinton Democrat Party DOJ, FBI, we’ve got actual action, actual criminal behavior that is in the process of being investigated and it’s mind-boggling.

“Everybody knows it.” Exactly. So what’s he doing there? (shouting) What the hell was Stephanopoulos doing there, if everybody…? I’m sorry. I’m really ticked about this, to have teo come in here, sit here, and clean up messes every damn day. What was he doing there! Of course, he’s a little wise guy. Here’s the president this morning on Fox & Friends. I guess this is… Let’s see he now would report anything that needs to be reported to the FBI. 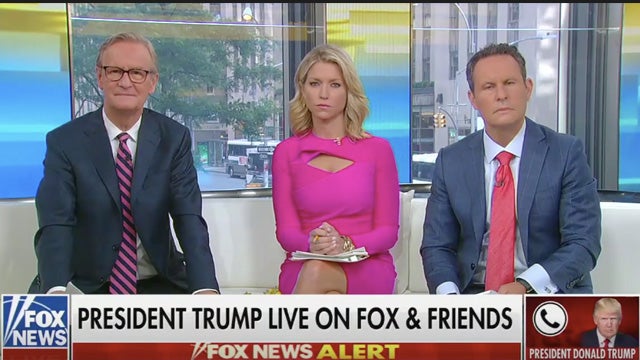 THE PRESIDENT: Of course, you have to look at it. Because if you don’t look at it, you’re not gonna know if it’s bad. How are you gonna know if it’s bad? But, of course, you give it to the FBI or report it to the attorney general or somebody like that. But, of course, you do that. You couldn’t have that happen with our country. And everybody understands that. And I thought it was made clear. In fact, I actually said at the beginning, I think I said I’d do both. But how are you going to…? If you don’t hear what it is… Well, if I don’t listen, you’re not gonna know. Now, if I thought anything was incorrect or badly stated, I’d report it to the attorney general, the FBI. I’d report it to law enforcement. Absolutely.

RUSH: There it is. It’s the exact opposite of what he said yesterday. “I don’t need to call the FBI. Why do I want to call the FBI?” Yesterday was operative. This is trying to clean up a mess that somebody, I’m sure, convinced him he had made — and I know it’s gotta be somebody who’s governed and defined by the media is saying about you. And believe me, those people are all around Trump. They’re all around him in the White House. They’re all around him everywhere he goes. Hell, they’re all around me! I mean, you can’t escape people who think that the media needs to be pandered to. Let me grab a quick call. Mark in Cave Creek, Arizona. Great to have a you. You’re up first towed. Hello.

CALLER: One point nobody’s brought up is why on God’s green earth would Trump call the FBI given their history of Trump-hating corruption? If he did, the only thing they would do is leak it, spin it, and begin another investigation.

RUSH: That is a great, great point. Given the all too real attempts by the upper echelon of the FBI under the Obama administration to destroy Trump, to lie about him, to try to tell you the election results overturned, why in the world would you trust anything to that organization? The answer is that theoretically that crowd is gone including Rosenstein’s gone. Now you’ve got Christopher Wray running the FBI. You’ve got Barr as the attorney general. So the theory is that the FBI is not made up of those vipers that were out there colluding with MI5 and MI6 and the Brits and the Australians in order to overturn the election results and essence running a silent coup.

But the point overall is right on the money. If you’re Donald Trump and this happens to you — Comey set you up and all these other people are setting you up and running spies into your organization or trying to — why in the world would you turn anything over you suspect to them? This is the one thing about yesterday that bugged the hell out of me. When did the FBI become so prominent that anything questionable in the campaign they get to determine? When did this start? It’s another mantra or narrative that the media and the Democrats have put into the system now.

RUSH: Trump is continuing now. He’s on Fox & Friends. Ainsley Earhardt says, “Nancy Pelosi accused you of a criminal cover-up again, Mr. President.” And she did. She’s out there now, after Trump’s comment yesterday that, you know, if he got some sleaze, say, from John Gotti’s family on Joe Biden, he’d take it. Or if he got some sleaze from the French president, Macron on what a phony Elizabeth Warren is, he would take it.

THE PRESIDENT: It’s a fascist statement. It’s a disgraceful statement. I call her Nervous Nancy. She’s a nervous wreck. And I’ll tell you what. For her to make a statement like that is outrageous. Her party got caught spying. I mean, if you look at what happened, Hillary Clinton, with the money that ultimately went to Russia for the fake dossier, that total fake pile of stuff that money gets paid — and, by the way, the amount of money that was paid, and it was paid by Hillary Clinton and the DNC, and it went to Russia, that’s the criminal. When Nancy Pelosi makes a statement like that, she ought to be ashamed of herself. It’s a disgrace. They spied on my campaign. One of the great criminal acts of all time.

RUSH: Now, what he’s reacting to is that Pelosi said, when he calls her fascist, is when Pelosi said that she thinks Trump should be in jail. Prison. That’s when we pointed out — I asked you a question: Where does this happen? Where in the world do political opponents actually threaten to and put political opponents in jail? Third World dictatorships, little tinhorn outfits, banana republics, and communist-socialist regimes.

And here comes Pelosi pretty much echoing that way of life, that way of political life. And that’s why Trump is calling her a fascist here. You know, he can shout this ’til he’s blue in the face.

That photo is all over the place. “Come on, Rush. That stuff doesn’t matter.” You think it doesn’t matter? The subliminal nature… You put that photo with the rest of these stories with Trump looking small and Stephanopoulos calling him out. “Why didn’t you do this? Why didn’t you do that?” It matters. You cannot discount this stuff. I don’t even know why Stephanopoulos was in there, given what Stephanopoulos has done to Mitt Romney, totally making up some business about banning abortion or contraception in states during a Republican debate.

It’s the Clinton administration calling when Good Morning America calls. It’s the Clinton political oppo research on the phone when Stephanopoulos calls and wants to come interview you! So we have another sound bite from that. Stephanopoulos waited a couple days to play it, but this is the bite that contains Trump finally getting fed up at Stephanopoulos and offering a characterization of him. The question from Stephanopoulos: “If you answered these questions to me now, then why not answer them to Robert Mueller?” 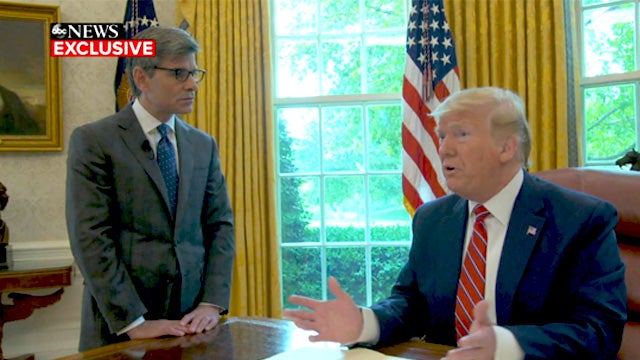 Romney says, “I don’t know. If they want to.” But it was over. Once he got an answer: “Republicans’ War on Women Recommissioned by Mitt Romney,” and that’s how the story got started: “Republican War on Women Begins Anew!” So here’s Stephanopoulos: “If you’re answering my questions, why wouldn’t you answer them to Mueller? If you answer my questions, why you so afraid to talk to Mueller?

“If you’re talking to me, why wouldn’t you talk to Mueller?” Well, they are almost the same thing — and he wouldn’t talk to Mueller, because he didn’t want to set up a perjury trap. What he didn’t know was that he was exposing himself to other kinds of traps talking to Stephanopoulos. Okay. So now you know the question. Here is Trump’s answer…

THE PRESIDENT: Because they were looking to get us for lies, for slight misstatements. I looked at what happened to people, and it was very unfair. Very, very unfair. Very unfair! I gave them 1.5 million pages of documents, right? I gave them four or five hundred witnesses. I let Don McGahn testify. I let him testify! He was a White House counsel. I let him —

STEPHANOPOULOS: But you knew he was gonna (crosstalk). You didn’t answer questions on obstruction.

STEPHANOPOULOS: Not on obstruction.

STEPHANOPOULOS: Not on obstruction.

RUSH: Yeah, right. So why do this? There was no crime. There was no collusion. You let ABC in there to create — and, actually, prolong — the presumption that there is. You let ’em in there to prolong it! “Why didn’t you talk to Mueller?” “I did talk to Mueller.” “You didn’t talk about obstruction!” “Who the hell are you? I don’t have to answer to you. What do you mean? I answered everything they asked me. There wasn’t any obstruction! You’re a little wise guy, George. Everybody knows it.”

Everybody does know it.

So what the hell?